Maryse is one of the most successful Diva’s that has ever stepped foot in the squared circle. Maryse’s route to WWE came via the Diva Search but it wasn’t that plain and simple, she is French-Canadian and only had a limited grasp of the English language when she entered. However, the 29-year-old didn’t let that get in her way and enjoyed a five-year spell with WWE and during that time Maryse became the longest-running Divas champion.

We caught up with Maryse to talk about, the Divas Search, and the current state of WWE’s women’s division. 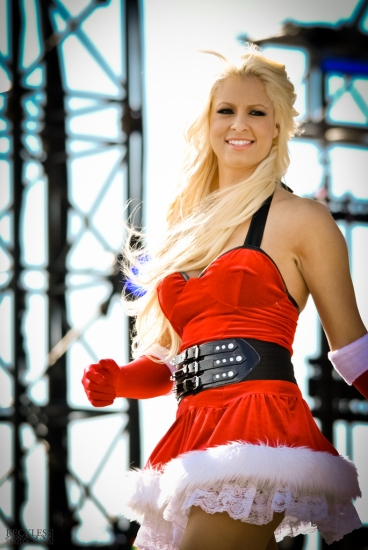 Maryse at Fort Hood, Texas in December 2010 for the WWE Tribute to the Troops show

How did you first get into wrestling?

At a friend’s house when I was watching a match that Jeff Hardy was involved in about 10 years ago! He is unbelievable!

I always loved watching Lita and Jeff Hardy of course.

You were trained by the likes of Al Snow, Dave Finlay and Ricky Steamboat what were those guys like to learn from?

I love Fit Finlay. He really understood the women of wrestling and working with him was so easy. He knew our character so well and was the best producer I worked with in WWE. I miss him! He was a good friend!

I also have a lot of respect for Al Snow. He not only taught me the basics, but the most important things in wrestling such as character, personality and charisma. It was never about the moves with Al, but about on-camera performance and how to make a crowd relate to you! It’s about telling a story.

There is an interesting story behind you getting into WWE via the Diva Search and not speaking much English, could you explain?

Yes, in 2006 I tried out for the Diva search. Out of 20,000 women auditioning, I was picked. That’s where the adventure had begun and what a long road that was! I could only speak 10 words of English at the time, however, WWE management told me that I had such an exceptional presentation in French, haha! They loved it, and they loved the fact that I didn’t care and just went for it!

Hard because I couldn’t understand anybody, but I learned so much. I learned how to listen carefully to everything, every detail, and I think that I needed a character that people could relate to, without speaking, which is very hard. I developed a heel persona and everything about Maryse was presentation, facials, gestures….. Over the years, I learned how to work a live crowd and perfect my craft. I believe that Maryse’s persona was the best female persona in years within WWE. 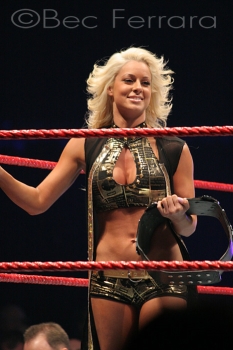 Maryse at the Rod Laver Arena in Melbourne, Australia in 2009

You held the WWE Divas Championship on two occasions, what were those experiences like?

Awesome, I am still the longest-reigning [Diva] champion in the history of WWE, holding the title for more than 216 days!

During your time in WWE, what would you say your highlight was?

Winning the WWE divas championship twice and being the first woman ever to be involved in a Money in the Bank match! 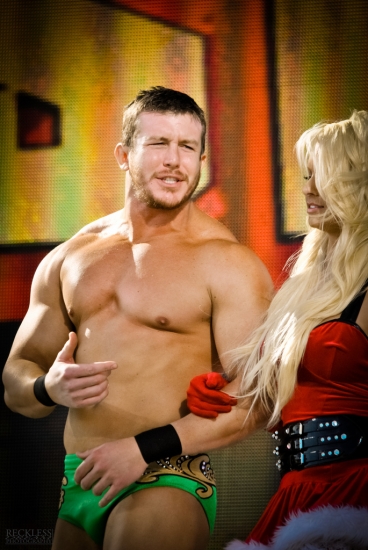 Ted Dibiase with Maryse at Fort Hood, Texas in 2010 for the WWE Tribute to the Troops show

You had a six-month spell managing Ted Dibiase, what was that like?

I liked working with Ted Dibiase and wish WWE management would have given us more at the time!

You received your release from WWE when you were recovering from surgery for an abdominal hernia – what were your first thoughts when you got the release?

Great, he is a real-life character!

When Gail Kim recently left WWE she had a go at the lack of airtime the Divas division get on WWE programming would you repeat these sentiments?

There is a lot of potential right now in the Women’s Division, but a lack of investment from the management! They deserve better. It’s hard to make a crowd relate to you and be behind you or against you with a 2-minute match every week with no microphone time. Once again, you have to be able to speak to make people relate to you! Hopefully it will change over time!

Would you consider getting back in the ring either with WWE or TNA?

No, not at the moment!

I understand you have a big project in 2012 – did you want to explain what this is?

I will be launching House Of Maryse this summer, it’s a combination of all of the things I love; jewellery, bikinis, lingerie, accessories. House Of Maryse will be available online worldwide and in over 400 stores in the US. It’s a very big project that I have been working on for over a year now and I can’t wait to show it to the world!