Man, I love the Royal Rumble. My favourite PPV of ALL TIME is Ric Flair’s epic title win from Royal Rumble 1992 (now closely followed by MitB 2011 :D), so to say I’m hyped for this year’s event is a bit of an understatement. Who doesn’t love the start of the Road to WrestleMania? By the end of tonight one man (or maybe even woman?) will stand tall about 29 others, having earned a shot at the title of their choice at WrestleMania. Exciting stuff.

But not only that, we also have a couple of stonking matches for the WWE and World Heavyweight titles, as well as finding out if John Cena is ready to “Embrace the Hate”.

Oh, and Chris Jericho mentioned something or another about “the end of the world as we know it”? Excited? I know I am, let’s take a closer look: 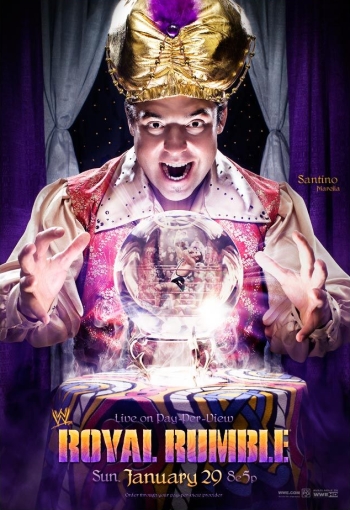 Oh John Cena, I was well into this until you pulled an angry face into the camera and some clever so and so photoshopped it onto a picture of Vigo the Carpathian from Ghostbusters II. Now I’ve got unrealistic expectations of Cena embracing the hate by engulfing the entire arena in pink goo that can only be broken by the enduring spirit of New Yorkers…wait…I’ve gone off track here. Let’s try this again.

If you read the Raw Redman Report (which you all should) you’ll have seen Jimmy Redman talking about how this angle has made Cena interesting again. I can’t deny that, but little moments like “angry camera face” from this week’s Raw keep doing their best to ruin it for me. Oh and the death of Zack Ryder. That kinda put me off the angle somewhat. As if you need any more reason to not want to be friends with Cena.

Funnily enough, Kane has been quite entertaining throughout this whole angle himself, playing up his big, bad, bogeyman in the shadows part fantastically. Sure it’s hammy as all heck, but I love the over the top theatrics when it’s either Kane or ‘Taker. I could watch those guys make things burst into flame or get hit by bolts of lightning all day long. I’m also loving the new masked Kane more than I thought I would, and refreshing his character seems to have done the big guy himself the world of good.

Still it is interesting to watch the “descent of John Cena”, and even more interesting to see where this all ends up. Will WWE have the nuts to turn Cena heel? Or is the “boy scout” gonna defeat his demons and “Rise Above Hate”? (Am I allowed to quote those things anymore? I’m not gonna receive a cease and desist, am I?)

Before the internet police come a’knocking at my door, let’s go ahead and make some predictions shall we?

Who I want to win: Hmm…depends. I’m thinking that maybe Kane winning could start to push Cena over the edge, which I’m all for. But then if Cena was to win by employing some “unsavoury” tactics, the same kind of effect could be achieved. I honestly don’t know who I want to win, I’m just happy to go along for the ride in this one!

Who I think will win: It’s hard to bet against Cena. This is WWE after all. I’m just hoping he’s not all smiles and salutes if he wins.

Is anyone else thoroughly enjoying the slow burn Daniel Bryan heel turn? The transition from nerdy fan favourite to straight up conniving evil genius has been damn cool to watch. The ambiguous nature of the promos, the responses to AJ’s profession of love (I appreciate/admire/respect that), just everything about Bryan recently has been ace. The sneaky ploys to turn everyone against each other to retain his title, the overacting with every win, the false bravado of how he’s not scared of Show or Henry. Seriously, the only way Bryan could make this any better right now is if he started using “The Final Countdown” as his ring music, and went back to wearing his old school Bob Backlund attire. I think Bryan’s gonna make a superb heel, and the fans seem to be buying it too.

That said, this whole angle wouldn’t be half as good without both Big Show and Mark Henry playing their respective roles. I’m sure Jimmy will go into great lengths about why either of these guys should be/are the current Greatest Man in the World (and I’ve gotta admit I’ve got a lotta love for Mark Henry’s smack talk, “I do this ALL DAY”) but I still think Bryan could outdo them both given the time. It feels like a while since we’ve had a proper sneaky, underhanded, remorseless, do anything to survive, champion (actually, it was probably Edge who was the last one I can remember), so I’m all for Bryan retaining and continuing to run his mouth about how he’s the greatest champion ever.

Show’s a perfect foil for this, as you just don’t expect Bryan to get away with beating Show, so everytime he does the crowd want to see DBryan get his ass handed to him just a little bit more. I wouldn’t want Big Show as Champion, but using him to validate a heel champion is perfectly fine in my book.

Now I haven’t forgotten about Henry, but he’s still working with injury so I don’t think he’s really going to factor in this match too much at all. Which is a shame, because I could really go for another Mark Henry monster run *sigh*. Let’s try and predict what’s going down, shall we?

Who I think will win: Honestly, Bryan. I reckon they’re gonna keep going with Bryan being able to pull out the victory, or make the great escape when the odds are totally against him. There’s still legs in this angle yet, Henry is working hurt, and the idea of Big Show as champ doesn’t seem to quite work in my mind. Bryan has to be the option.

Oh ho ho ho!! Am I ever looking forward to this match? My favourite guy vs. my favourite up-and-comer for the WWE Title. Sweet! I’m expecting this to be a barnstormer, with both guys looking to steal the show with this one.

Screw Johnny Ace and his GTS no-selling, though. Seriously. Oay, I’m being a little harsh, because against all possible logic John Laurinaitis has finally done what he couldn’t as a wrestler, and that’s develop an entertaining character. That being said though, his entertaining character is a douchebag yes man, who seems completely out of his depth in his current role…which kinda sounds like real life John Laurinaitis. Well they do say the best characters are just extensions of your real personality?

I’m enjoying this angle immensely. Punk has been ace so far as the anti-establishment, anti-corporate champ, and at least now they’re not trying so hard to make him seem like one of the “good guys”. Ace has been great as the corporate suit too. But then he has years of experience of being a corporate douchebag, so I’m not entirely surprised.

The only guy who hasn’t done as amazingly as I hoped for so far is Ziggler. He’s been kinda left on the back burner while the whole Punk/Ace angle took the driver’s seat. That’s not to say that when Ziggler’s had his TV time he hasn’t seized the opportunity. His promo with Foley from two weeks ago was nothing short of fantastic, I particularly liked the whole “Go home, buy a new shirt, eat a salad, and just GO AWAY” line was all kinds of awesome, and delivered superbly. I’m hoping from here Ziggler will strike out on the main event scene under his own volition, without having to be part of what is technically someone else’s angle.

So will Johnny Ace screw Punk out of the title. You can bet he’s going to try to, but I’m stumped as to how the ending of this is going to go down. I’m calling that Ace is going to have to take a ref bump at some point, only to be replaced by another official to make the call. What I’m secretly wishing for is as the match heads towards the finish Ziggler misses Punk and accidentally bumps Laurinaitis. While Ace is down, Punk takes the advantage and hits Ziggler with the GTS, or locks on the Anaconda Vice. Cue Mick Foley in his old Mankind Referee shirt to make the count/call for the Punk win. We get animosity between Ace and Foley ahead of HHH’s “Management Review” tomorrow, and Ziggler’s got legitimate reason to be disgruntled and demanding another shot at the strap. I reckon that’d be pretty sweet.

On to the predictions…

Who I think will win: Punk, but with shenanigans aplenty. In fact I’m expecting an Attitude era style match, with ref bumps, swerves, run ins, all kinds of craziness. But the important thing is Punk will be leaving as champion. I’m pretty much certain of it.

30 of the WWE’s finest collide with a title shot at Wrestlemania on the line, in a match where anyone is eligible, and where anything can and will happen. Remember John Morrison Spiderman saving himself from elimination last year? Or Ric Flair winning the title? Or Shawn Michaels going from start to finish? The rumble always, ALWAYS throws up at least one memorable moment per year, and I am not expecting this year to be any different.

But who’s likely to win? Who’s going to go on to the “Grandest Stage of Them All” with their eyes on the prize? And this year ANYONE is eligible to enter…but I’m not entirely sure what that means? Could we see literally ANYONE under a WWE contract jog down the aisle to enter tonight? Because that could be awfully cool.

More importantly, who’s going to be our usual surprise entrants? Last year we got Booker T (Yay! Shucky Ducky Quack Quack!!) and Diesel (umm…yay…I guess?). Who else are we likely to see? The rumour mill has run rife (as is tradition) with whispers of Lesnar, RVD, maybe even Michaels, but half the fun is the actual surprise of the buzzer sounding and the unexpected music hitting the sound system.

Instead of the usual who I want to win, and who I think will win, I figured I’ll make a couple of predictions for things to happen throughout the course of the rumble.

– Kane will add a fair few more eliminations to his resume, maybe even surpassing Shawn for most eliminations.
– Dolph Ziggler will put in a lengthy showing of around 45+ mins.
– Kofi will get at least one awesome high spot, and hopefully not get shafted for simply being in a team with the “high flying” Evan Bourne.
– Foley will get through at least two personas before he’s eliminated.
– Chris Jericho will win.

Yeah, you heard me. Chris Jericho will win, and it will be the end of your world…as you know it. YEAH BABY, COME ON!!

Seriously though, Jericho is my pick. I’m not sure where it’ll go from there, but the fact that his highlight reel seemed to centre mostly around his undisputed title run…hmmmm…curiouser and curiouser.

And that’s my pre Rumble ramble. I’m off to watch Chikara High Noon (mmm Chikaralicious) and polish off a few cold ones with my buddies in anticipation of the show. But as always there’s a big ol’ comment box at the bottom of this page for you to make your voices heard. Holler at your boy about your rumble predictions, and I promise not to mock you if you’re wrong if you don’t mock me!

Right I’m off to summon the will to stay awake until 4am, catch you next time true believers!!