WWE 12. It’s not the most ground-breaking name of all time is it? Well, actually, it sort of is.  For seven years, fans of wrestling games have been at the mercy of the formally famous, now just infamous, Smackdown vs. Raw series.  As good as the heyday of the series was, later releases have been plagued by the same curse that haunts EA’s yearly sports releases; Good game, but not worth it if you got last year’s. 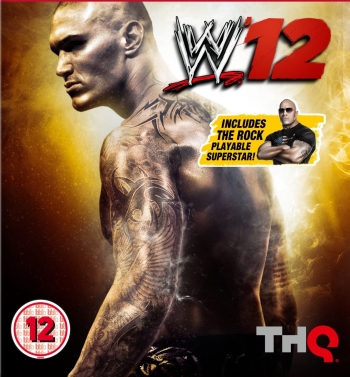 With WWE 12, THQ are trying to break that mould. Smackdown vs. Raw is dead, the WWE series has been born, and the lineage has been restarted. WWE 12 is Batman Begins to Smackdown vs. Raw’s Batman and Robin if you will. So, in that sense, it really is a ground breaking title. It’s saying that this game is the start of a new era. But is it? Is this really what pro-wrestling video game fans have been asking for, or is it just a clever marketing way to try and win those fans back and return the WWE series to it’s place on everyone’s list of yearly obligatory, review-proof games, like the FIFA series, and the Call of Duty games?

To find out, I’ve taken some of THQ’s claims about what sets WWE 12 so far apart from the Smackdown vs. Raw series, and will try and break them down. I was lucky enough to be invited to an event where I could play the game, but, more interestingly in this context, I also got to hear THQ’s press spiel about why this ISN’T Smackdown vs. Raw 2012. Let’s see; 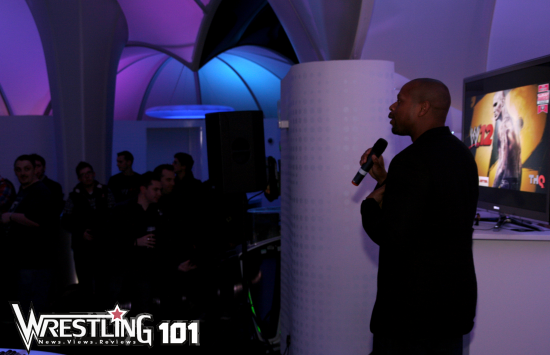 Cynic that I am, when I heard the claims that the game had been revolutionised by “Predator Technology ™”, my immediate thought was that they were pulling the old video game trick of introducing an ambiguous silly name to the proceedings and little else. So I was glad when THQ actually went out of their way to explain, in lay-person terms, what predator technology actually is. Basically, it comes down to two things; a new animation engine, and a new graphic renderer.

Smackdown vs. Raw was almost famous for it’s increasingly out-dated animation engine, causing wrestlers to cut and clip and fly across the screen in shoe-horned in sequences, sliding across the floor on their backs, teleporting across the ring, and taking part in cut scenes that had little or nothing to do with how the action looked before hand.  So it brings me great pleasure to tell you that, genuinely, this problem is pretty much totally gone. The animation is damn near close to perfect, things actually, well… make sense. Everything flows, everything moves in accordance to the laws of physics, everything makes sense and, most importantly, everything now actually looks like a wrestling match. It’s probably the most noticeably difference to the Smackdown vs. Raw series when you first pick up the game.

The new renderer though, eh, not so much. Don’t get me wrong, things do look lovely, the crowd looks especially great, but, every now and again, something untoward catches your eye. For me, the first time I noticed an issue was Mark Henry giant flappy biceps cutting straight threw his equally giant, equally flappy man breasts when his arms swung as he walked. Another noticeable moment was when playing as Sin Cara, possibly the most clothed member of the roster, who had a distinct lack of texture to his costume, making him look a little bit like a strategy game character when you zoom in too far, and realise that they’re little more than a blob of colour.

The presentation-orientated claim is that the camera angles have been improved to directly imitate the camera angles that the WWE use. Now, I don’t really watch too much wrestling anymore, so this was a little bit lost on me, but I happened to be playing with a friend who still watches, and, according to him, they’ve done a pretty good job. The hard camera is very much where the hard camera should be, and, when the camera zooms in for close ups of special moves, you do get that feeling of the camera man standing on the apron, peering over the top rope.

The gameplay-orientated claim is a little more complicated; it’s a new “limb targeting system”. As the name suggests, it allows you to specifically target various areas of your opponent’s body, with damage to each area having various effects. For example, damaging your opponent’s legs slows them down and makes them unable to sprint, whilst damaging their head causes your opponent to stagger about more after moves, leaving them exposed to special standing submissions.  It’s a fun little system, and works fine, but the only problem is that it’s a little bit pointless. It’s easy to beat your opponent without doing, and your computer-controlled opponent will rarely try and do it to you. I suppose the real test for this will come during online matches, where human players can come with different strategies, leading to larger characters targeting high-flier’s legs and so in. In that context, this gameplay style has potential to really come into it’s own because, for what it is, it does work, it’s just that, in the single player experience, you don’t find yourself really needing it.

Reality: Whilst not the biggest deal, the claims made about camera realism are certainly true, you can’t fault them there. The new limb-targeting business, again, is certainly there, but the game needs to be played online to see if such an addition is worthwhile, or a meaningless add-on. For now, I’ll be an optimist; 8/10

Okay, this isn’t so much a claim as it is a fact. There is certainly a create-an-arena option, but the more important part is what it’s like, and the answer is; It’s fine. It’s just fine. For a start, create-an-arena is a little misleading. It’s not create-an-arena, it’s create a ringside area. The crowd, the ramp and the titan-tron are untouchable; you just get to play around with the ring, the announcer table, the mats, the crowd barrier and a few other bits and pieces. And by “play around”, I mean “change the colour and stick logos on things”. That’s sounds dismissive, but to that, I’d reply, well what did you expect? It’s create-an-arena, what was it going to be? To be fair to the guys at THQ, they’ve certainly thrown an awful lot of logos in there.  ECW, WCW, even FCW, it’s all in there, as me, and my terrible memory of 1999 WCW, proved; 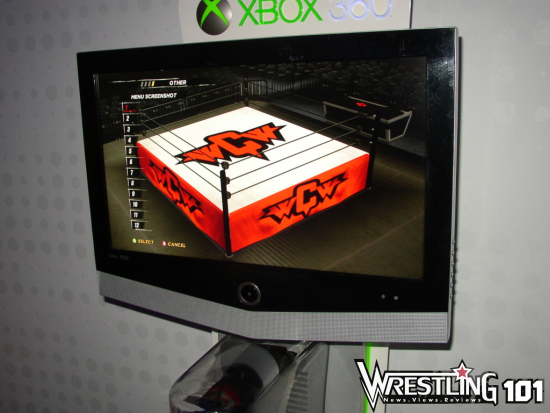 Reality: Anyone who’s buying the game for this needs to be sat down and spoken too. It’s certainly not bad, it’s exactly what anyone would realistically expect, but that’s probably not a good thing. Making more of the actually arena customisable would have been nice. I can’t imagine many people are going to be playing around with this for longer than a week before forgetting about it. 4/10 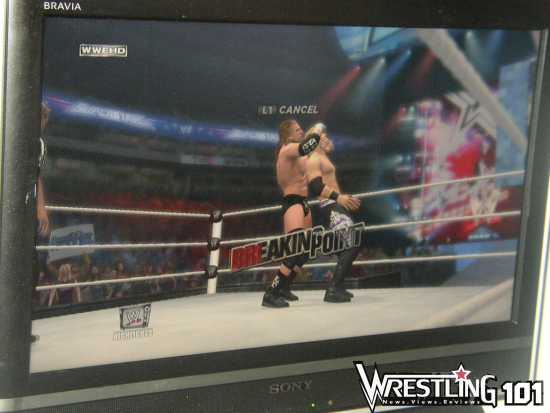 Okay, slightly misleading title, it’s still a wrestling match, it’s still, for the most part, pins and submissions, but the way of achieving them has changed.

For submissions, THQ have introduced the “Breaking Point” system. Nice name, annoying as hell to use. It’s basically just button bashing, endless button bashing. It’s no fun at all.

For pins, you get a mini-game that requires you to stop a moving target within a certain area. The more damage you’ve taken in the fight, the harder this mini-game is. Now, for me, the problem here is that I found this mini-game to be ridiculously hard. I have no idea if that’s because it is actually hard, or if I’m just really terrible at it.

Reality: Well, they’re certainly there alright, but I found the submission system to be a real let down, whilst the pin system is either way too hard, or, even worse, way too hard for me. 3/10

Road To Wrestlemania is back, this time with a full on story arch and everything! The game takes place over three chapters, telling an evolving story where your wins and loses effect what happens next. You start by playing a heel Sheamus, go on play as a tweener Triple H and end up as a babyface of your own design. THQ have estimated that the three chapters back to back will take up an impressive 12 to 13 hours of gameplay. And more excitingly, there’s a little treat in there for any WCW fans that I won’t spoil.

The second single player mode is WWE Universe 2.0, which combines aspects of Road to Wrestlemania with aspects of the old Manager Mode. Basically, you manager your own roster, and take part in your own shows and angles. It’s like those old RPG’s that game with the ability to build your own campaigns. Universe mode is also where you’re going to get your unlocking done, and there’s a lot of it to be doing; there are over 60 unlockable items including arenas, belts, wrestlers and more.

Reality: A big thumbs up on this one. Both modes deliver what they say and are the real selling factory of the game to anyone who isn’t interested in playing online. Personally, I prefer Road to Wrestlemania to Universe Mode, but both are a lot of fun, and should keep the game interesting for a long time. 9/10

And so there you have it, five claims, five realities. But, of course, there’s more to the game than just the new features. Obviously the Create a X options are back; Create a Highlight, Create a Move, Create a Logo, Create an Entrance Video and, of course, Create a Wrestling, resulting in my terrifyingly life-like Gary Glitter creation;

Another important component to every wrestling game is the match types which, I’ll be honest, are insanely thorough. At the beginning of every match, you can edit and fine tune the rules and set up to create over 80 different custom match types including old favourites like Hardcore, Hell in a Cell, Cage, TLC, Inferno (which I couldn’t, for the life of me, figure out how to finish),  Iron Man and Last Man Standing.

Then, of course, there’s the roster itself, and what a roster it is. Along with pretty much every current WWE superstar you could care to mention, THQ are promising that, once all the DLC is out, the game’s roster will contain a mind-blowing 70+ superstars. That DLC will come in three blocks. The first, the “Wrestlemania Package” will be released along with the game, whilst a second, the “Divas Package”, will be released in December, and a third, the “Legends Package”, will be released in January. Those packages will add characters from the past and present like Trish Status, Kharma, Batista and two as yet unannounced legends who have never before appeared in a WWE game.

All in all, THQ really have tried to pull out all the stop here. They’ve heard you’re complains about Smackdown vs. Raw, and, for the most part, they’ve listened. The new animation engine has sorted out many of the old problems, the two single player modes look very impressive at first glance, and it’s hard to fault over 60 unlockables, over 70 wrestlers and over 80 match types.

Is WWE 12 a new series? No, it’s Smackdown vs. Raw 2012 with a new logo. The reboot is a lie. But a white lie, because, believe it or not, for the first time in years, this is actually a very good Smackdown vs. Raw, and if THQ need to change the name of the series to make you take them seriously, then more power to them, because they’ve actually gone and made a real cracker of a wrestling game. 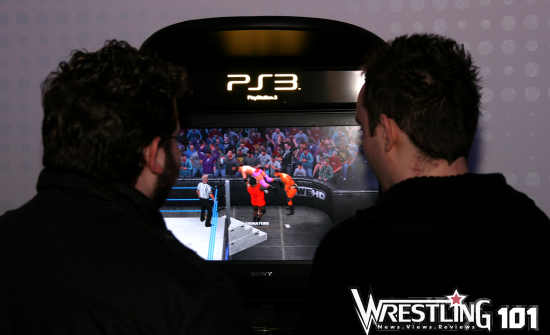 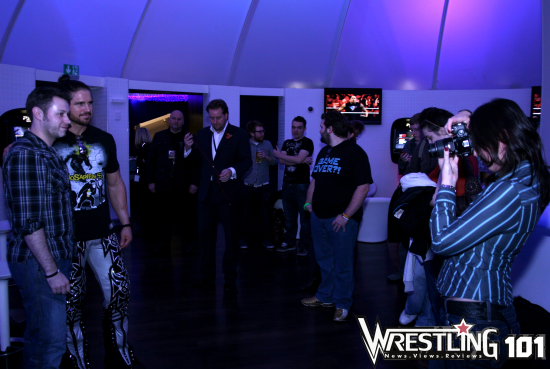 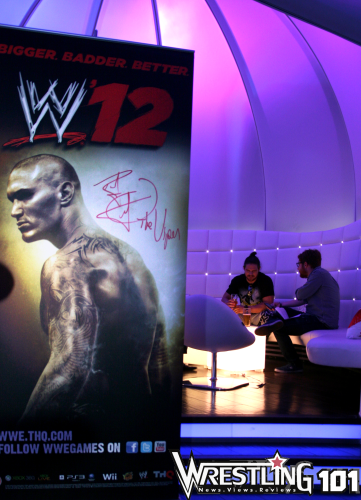