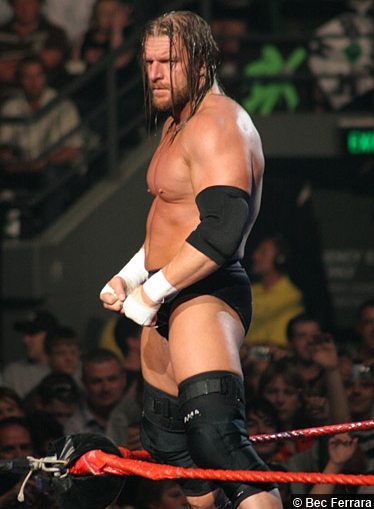 One week after the now infamous walkout of the majority of WWE personnel in protest of Triple H’s job as the COO of the WWE, the 959th edition of WWE Monday Night RAW was a RAW SuperShow and it came to you, live, from the Chesapeake Energy Arena in Oklahoma City, OK. After everybody from WWE Champion Alberto Del Rio and Christian to commentators Jim Ross and Jerry “The King” Lawler to Divas, referees, and cameramen walked out on WWE COO Triple H, those Superstars, Divas, commentators, and other crew members would hold a “Solidarity Rally” in the parking lot of the Chesapeake Energy Arena to protest Triple H’s refusal to step down as the Chief Operating Officer of the WWE. While the majority of WWE talent walked out on Triple H last week, five Superstars have agreed to cross the picket line as John Cena, CM Punk, Randy Orton, Sheamus, and Big Show have given their word to the COO that they will compete on the RAW SuperShow, but can the RAW SuperShow hold up with only five Superstars?

After last week’s unprecedented walkout, the RAW SuperShow kicks off in very unorthodox fashion as an empty announce position is shown before cameras venture through a deserted backstage where WWE COO Triple H emerges from his office and makes his way to the ring. Triple H states that he showed up and the fans showed up before saying that he was left bewildered by something that he thought he would never see, as the majority of the WWE roster walked out last week. The COO continues that the Superstars and other talent did not walk out on him, but walked out on the fans before saying that those who walked out last week are in the parking lot holding a “Solidarity Rally”. Triple H continues by mockingly saying that the WWE has gotten “too hard” for them before saying that all of those Superstars have their ring gear, but they are refusing to step foot in the ring as long as Triple H is the COO. Triple H then asks the fans if he should quit before saying that he’s never been a “quitter”, adding that he will not be “blackmailed” and he will not “quit”! A fired up Triple H then declares that he does not care if he has to take off his suit and wrestle a “broomstick” for two hours, adding that the broomstick will give him a better match than most of the guys in the parking lot. Triple H then vows that, come hell or high water, he will give the fans a show!

After this declaration, one of the five Superstars who vowed to compete on RAW came out as former WWE Champion John Cena joins Triple H in the ring. Cena tells the COO that the walkouts have called and asked him to join their cause while Triple H did not contact him at all. Cena continues that he has had a lot of bosses before telling Triple H that he is staying right there on RAW. Another man who did not participate in the walkout then makes his way to the ring as “The Great White” Sheamus joins Cena and Triple H in the ring. Sheamus recalls a time two years ago when he laid Triple H with a pipe, but “The Game” did not file a lawsuit, he came back and got his revenge like a man. Sheamus continues that he is not going to be a part of some “parking lot shenanigans” because he came there to be a part of Monday Night RAW! The loyal Superstars continue to file out as “The Voice of the Voiceless” CM Punk joins Triple H, John Cena, and Sheamus in the ring. Punk states that he is the guy that made walking out look cool before saying that he has got good reason to walk out, but he does not. Punk continues that he thrives on an “unsafe working environment”, because it’s professional wrestling, not ballet. Punk then asks Triple H what they do now.

Triple H then tells the three of them that they are going to do what they do best and that is “shut up and fight”! Triple H then announces that Sheamus will go one-on-one with John Cena and he will be the Special Referee and, as for CM Punk, Punk will have the job of serving as the one and only commentator to call the match, a job that Punk agrees to as long as he gets to wear the COO’s blazer!

With CM Punk serving double duty as the sole commentator and timekeeper at ringside, the opening match was set as John Cena went one-on-one with “The Great White” Sheamus with Triple H as the Special Referee. However, the match was brought to a halt as the former COO and current WWE Chairman Mr. McMahon returns to RAW! The Chairman tells the COO that he loves the hell-raising that Triple H has brought to RAW, but the WWE Board of Directors thinks that the walkout may get worse and jeopardize the future of the WWE. McMahon continues that, per the request of the WWE Board of Directors, Triple H’s services are no longer needed as the COO!

Mr. McMahon continues that no member of the McMahon family will be running RAW as the Board of Directors are looking for a General Manager who is “unbiased”, whose ethics are beyond reproach. The Chairman continues that, until they find a permanent GM, they have named an Interim General Manager for RAW before McMahon announces that the Interim GM will be none other than the Executive Vice President of Talent Relations, John Laurinaitis!

Backstage, the new Interim General Manager of RAW, John Laurinaitis, is welcoming the WWE talent who walked out last week back into the building, but the Interim GM is stopped by John Morrison. Morrison tells Laurinaitis that Triple H is a “narcissist”, but Laurinaitis absolutely “sucks” and the Interim GM responds by making a match for John Morrison as Morrison, in his street clothes, would go one-on-one with Christian, also in his street clothes!

With Triple H no longer in charge of RAW in favor of John Laurinaitis becoming the Interim General Manager, the commentators return as Jim Ross, Jerry “The King” Lawler, and Michael Cole take their seats at the announce table.

Before he went one-on-one with Randy Orton, World Heavyweight Champion Mark Henry states that he will face any man, but only as long as they are the #1 Contender, adding that Big Show is not the #1 Contender. “The World’s Strongest Champion” continues that he took all the abuse from Big Show on SmackDown and he is still there before telling Big Show that, at Vengeance, “vengeance” is his. Before making his entrance, Randy Orton tells Mark Henry that Vengeance will be his!

After their Hell in a Cell Match eight nights earlier, World Heavyweight Champion Mark Henry went one-on-one with “The Viper” Randy Orton in a non-title match. During the match, Intercontinental Champion Cody Rhodes rushes out, but is knocked down by Randy Orton. Mark Henry then tries to take advantage, but Orton counters with the RKO, but when Orton goes for the pinfall, Rhodes attacks Orton. After the match, Rhodes continues to beat down Orton, but Orton fights back, narrowly missing the RKO as Mark Henry catches Orton with the World’s Strongest Slam twice in a row. Then, with Orton defenseless in the ring, the Intercontinental Champion hits Orton with the Cross Rhodes before calling one of his baggers out so that Rhodes can put a bag over Orton’s head!

After her assault on Divas Champion Beth Phoenix last week, Kelly Kelly teamed with Eve to face the team of Tamina & Rosa Mendes. In the end, it was Eve hitting the Evesault on Rosa en route to picking up the win for her team.

After the match, Interim General Manager John Laurinaitis makes his way to the ring as the GM as Laurinaitis announces that, at Vengeance, Alberto Del Rio will defend the WWE Title at John Cena. The GM continues that he is a man of “ethics and morals” and he is going to do the ethical and moral thing before calling RAW commentator Jim Ross into the ring. The Interim GM tells J.R. that the Hall of Famer walked out on Triple H last week, adding that J.R. walked out on Oklahoma and the entire WWE. Laurinaitis continues, calling J.R. an “ingrate” before firing the Hall of Famer! Why did John Laurinaitis decide to fire legendary announcer Jim Ross?

The RAW SuperShow also saw 6-Man Tag action as WWE Tag Team Champions Air Boom teamed with Mason Ryan to take on United States Champion Dolph Ziggler, Jack Swagger, & David Otunga, with Vickie Guerrero in their corner. In the end, it was Mason Ryan hitting the Black Hole Slam on Dolph Ziggler en route to pinning the United States Champion to pick up the win for his team.

Then it was time for the main event as, two weeks before he defends the WWE Title against John Cena at Vengeance, WWE Champion Alberto Del Rio went one-on-one with “The Voice of the Voiceless” CM Punk in a non-title match. In the middle of the competitive main event, the Interim General Manager John Laurinaitis interrupts, ordering that the match be brought to an end! The Interim GM then announces that the main event will now be a tag team match as CM Punk will team with Alberto Del Rio to face two men he has reinstated, The Miz & R-Truth!

Per the orders of Interim GM John Laurinaitis, the newly reinstated Miz & R-Truth faced the team of WWE Champion Alberto Del Rio and CM Punk. During the match, Alberto Del Rio tagged himself out of the match before feigning an injury in order to leave CM Punk high and dry to face The Miz & R-Truth alone. When it looked like CM Punk was poised for victory, lifting The Miz up for the GTS, R-Truth comes in as both men relentlessly attack Punk. However, an unlikely ally makes the save for Punk as Triple H rushes to the ring, aiding CM Punk in sending Miz & Truth packing from the ring. The fight continued on the outside as Triple H sends The Miz into the steel steps as CM Punk takes apart the announce table with the intent of putting R-Truth through it. However, both The Miz & R-Truth manage to escape as Triple H and CM Punk stand tall in the ring. Backstage, Interim GM John Laurinaitis is talking with David Otunga as the GM reveals that, at Vengeance, Triple H will team with CM Punk to face The Miz & R-Truth! What will happen in two weeks when Triple H returns to the ring to team with CM Punk to face The Miz & R-Truth at Vengeance?