By Henry Higgins
DVD Reviews
This page contains affiliate links. At no additional cost to you, we may earn a commission if you click through and make a purchase. Learn more

There can only be one man standing! When unspeakable evil falls on a quiet river town, Sheriff Logan (KURT ANGLE) is thrust into a chilling nightmare of death and mayhem. He is confronted with a series of horrific murders, each more vicious than the last, and soon learns of the communities seedy past and the evil that has risen from purgatory to exact revenge on the town. When Logan discovers that the murders are committed by the spirits of old river squatters, the Jacobs Boys (KEVIN NASH, PSYCHO SID VICIOUS), the town explodes into a battlefield of blazing guns and zombies. RIVER OF DARKNESS is an all-out heavyweight beat down featuring former World Wrestling Champions KURT ANGLE, KEVIN NASH & PSYCHO SID VICIOUS. 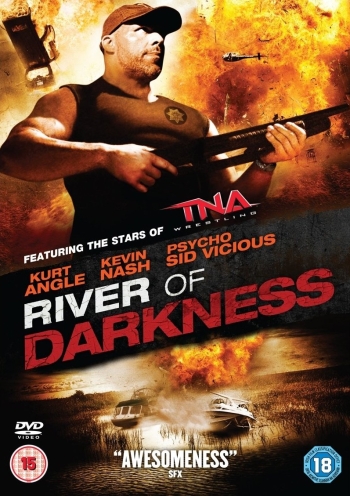 Wrestlers featuring in movies is nothing new, they’ve been doing it for decades, but apart from Hulk Hogan, it wasn’t until WWE Studios began releasing their own movies that they became the lead actors in their own cinematic vehicles. Most of WWE’s output has been good action movies (with Kane’s See No Evil being an effective horror too), but the drama of Legendary and the “comedy” of Knucklehead has shown that when they stray from their strengths, the result isn’t the best.

With that in mind, what we have here is the second leading role for TNA’s Kurt Angle and, while there’s no TNA Studios (yet), the company logo is appearing in the marketing and the promotion is being mentioned during interviews. Remember, this is how WWE started out before going it alone.

Drafting in other wrestlers in Kevin Nash, Sid Vicious and Glacier (who hasn’t been mentioned in the pre-release blurb) also helps create at least a minor level of interest from the established wrestling fan-base while, from the movie world side of the fence, low-budget horror always has a niche… so this should be a brain-switched-off sub-90mins blast of so-bad-it’s-good frightfest, but it’s nowhere near.

The acting is horrid, the effects are laughable and the claims of a $3million budget seem a zillion miles away from what’s on the screen (I’ve seen higher quality YouTube videos – this looks like it was filmed on cheap hand-held video cameras). Angle is an amazing in-ring talent and has shown in the past he is also adept at backstage skits in pro-wrestling, but put him in a film and he has no aptitude at all for what he’s meant to be doing.

The director’s only other helming credit is for Endgame, the other film with Kurt Angle in the lead role… and, if there’s any justice in the world, this’ll be his last. Even the infamous Uwe Boll will be sneering down his nose at how awful this movie truly is. Blatant errors like a villain being shot in the chest, only for his shirt to completely regenerate in the next shot or the complete rip-off from one of Nash’s “spots” in The Punisher all add up to an infuriating experience.

The only saving grace is that the running time is short and I have a bit of a crush on Lindsey Carothers.

As this was a review copy, there were no extras available at this time.

Avoid like the plague. Seriously, this movie is as inept an example of the art of film-making as you are ever likely to see.