By Paul Kelly
Wrestling Book Reviews
This page contains affiliate links. At no additional cost to you, we may earn a commission if you click through and make a purchase. Learn more

See No Evil is the novel based on the screenplay of the Lionsgate/WWE Films project: See No Evil, staring WWE superstar Kane (AKA Glen Jacobs). Both the screenplay and this novel were penned by Dan Madigan. 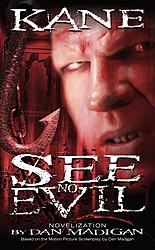 Officer Frank Williams and his rookie partner Neal Blaine respond to reports of a disturbance at a derelict house. Inside they discover a young woman rocking in place, her eyeballs torn from her skull………..however they also find the psychopath who performed this ‘surgery’ is still in the room……and carrying a large axe! Blaine is decapitated while Williams loses an arm, however the officer manages to fire his gun at the seven foot tall monster, at least one bullet lodging itself into the killers brain. Williams is saved from decapitation only by the arriving backup scaring away the wounded monster.

Four years on and Williams is a correction officer handpicked to lead a group of teen offenders on a community project to tidy up the fire damaged Blackwell hotel, however this is where the killer is now residing, and he hunts them down, one by one…

See No Evil is very well written, at times I could have believed it was penned by Dean Koontz, the tension slowly raises between the protagonists before the killer, Jacob Goodnight, makes his reappearance. At times some of the characters seem shallow and you can tell who will be killed by how little Madigan seems to bother with fleshing them out, but credit where credit is due as for once a villain is given not only background and a reason, but it has been written so that you understand why he does what he does. Understanding with a lack of sympathy is a difficult trick in a horror villain, after all who actually wants to empathise with someone who will pluck your eyeballs from your living head? Besides Jade Goody obviously. And when the ‘heroes’ of the piece are mostly deserving of punishment you can’t help but see Goodnight as almost innocent despite his slaughter of the antagonists.

The usual horror clichés are here, dark hallways, killers from the past, people wandering off alone…but for once it at least can be forgiven as each person has a reason for obeying the rules of horror, hell at one point I felt like Christine was embarrassed at some of her lines and actions. That is very odd given how this is a book!

I have to admit to being apprehensive over how this will translate onto film as a lot of the appeal is the character of Goodnight, I struggle to imagine it working outside of a book.

Still if you enjoy books along the lines of ‘The Beast House’ or ‘The Long Night’ then this is for you, avoid if Mills and Boon rocks your world.