A former employee of both WWE & TNA, Nick Cvjetkovich is a unique individual with an even more unique wrestling persona. With roots in the carnival industry, Nick was tailor-made for the circus known as professional wrestling. In this Wrestling 101 exclusive interview, the man known as Kizarny in WWE and Sinn in TNA gives his thoughts on his treatment in both companies, information on his SiNN BODHi & The Dynamite Death Monkiez shows as well as his passion for creating his own alternate universe through his self-written comic books. 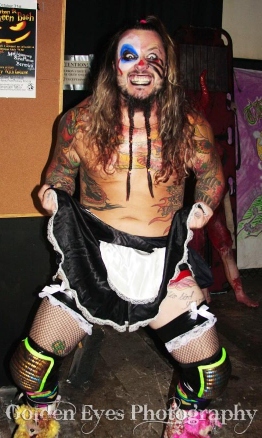 Anyone for room service?

What made you decide to get into pro wrestling?

Spiderman, Dusty Rhodes and Twister Sister made me get into pro rasslin’…They were all superhuman and that is what I wanted to be! And NOW my journey to the dark side is complete!!!

Being childhood friends of Edge and Christian…what were they like growing up and do you still keep in touch with them?

They and I were goofy-ass Dorks growing up and STILL are today!!! Yes, we all still are BFF’s to this day…

What was it like working in the same organization with them?

The three of us jumped around our hotel room like giddy children on the weekend of Christian’s ECW debut… Three goofy-ass peas in a pod!!! Aside from interrupting a Vicky Guererro segment—Kneizock! Kniezock!— and being chased off by Edge lol that’s as close as we came to wrestling at WWE… Edge reeeally wanted us to wrestle each other on Smackdown to show what I can do but unfortunately that never ended up happening… We did wrestle at the FCW training center in Tampa and at the BSE gym in Toronto when Edge was test driving his body coming off injury… We even snuck Christian into a private workout once at the FCW gym when he was still working with TNA lol

You joined TNA in August 2003, how did that come about and what was it like working there?

Scott D’Amore scouted me and brought me into TNA and I was soon a member of the New Church. I had a lot of fun working with Jim Mitchell, Slash, Shane Douglas and Vampiro… I learned a lot at TNA and realized wrestling was full of great people and snakes alike!!! Listening to the fans chant “Evil! Evil! Evil!” as the lights turned red and we the New Chruch entered ringside still gives me goosebumps to this day…

The Carnival Freak is me head-to-toe… Nobody, NOT Vince, NOT Jeff, NOT anyone gave me that… I was ready-made… Vince, however, asked me if I could speak authentic carny to which I responded “Yeises eizI ceizan”… then he said “GOOD!” and re-named me Kizarny (Carny for Carny)… I liked the idea of speaking carny but NOT from beginning to end like in my Smackdown vignettes…I preferred the promos I was doing in FCW produced by Dusty Rhodes… I was cutting a darker-Jokerish-Jake Robertzy promo and droppin’ some nonsensical carny into it for effect… “Weizone fish Tiezoo fish Greizeen fish Bleizue fish!” That way it didn’t matter if you understood or not you would simply realize I am out to lunch… AND I AM!!! I think NOT explaining what I was saying in the Smackdown vignettes was irritated to fans because it was irritating to me… Just doing what I was told to do folks! Your boss says jump and you say how high boss or you’re fired!

Did you have to practice speaking carny or were there a lot of retakes for taping those promos?

I learned carny while learning my craft… Sleeping in my car on the road for the past decade at both wrestling shows and working on sideshows and freakshows… Bleeding, sweating, paying dues that don’t count for sh*t in Vince’s eyes… I did all the vignettes in one take never flubbing my carny except when they said I was being too heelish and to repeat it again a little more f**kin’ friendly…

What was it like working for WWE, how does it compare to TNA?

Working with WWE was awesome and awful all at once… Being there was realizing my childhood dream and for that, I will always be grateful to Vince McMahon and John Laurinaitis… Getting to perform in front of sooo many excited fans at Smackdown and on the live events is an indescribable high! The glitz of Smackdown TV was awesome and made me felt like I was a rockstar but wrestling at the live events was more me because my producers would let me be me and the fans got everything I had! I was soooo flattered to come back through the curtains one night to be greeted by Ricky Steamboat imitating me and laughing about how entertained he was! I was sooo flattered that I had amused a legend that I looked up to since I was a wee lil circus run-a-way! Working at WWE was also awful because there are sooo much politics and backstabbing you never know who your enemies are because they are all gutlessly and unaccountably hiding in the shadows!

You were released from your WWE contract on March 9 of this year. What reasons, if any, were you given for your release?

Somebody hiding in the shadows???… Their knife holstered in my back…

I wasn’t given a straight reason why I was released… One minute I was being told how unique I was and how great of a work ethic I had the next minute they had nothing for me… Even though I gave them idea after idea… I have heard many different theories… I guess I just didn’t fit their mould of cookie cutter…? Not enough abs showing I guess even though in the ring I can run circles around every ex-NFL player or jacked-up underwear model collecting a paycheck in WWE developmental system… Ask Doc Tom or Kidman!!! I never breached the WWE ‘Wellness’ Program but I guess they want their wrestlers to read between the lines??? I don’t wanna sound like a whiner but I do want to deliver an honest interview… I have been complimented by my peers and legends and nobody can take that away…

Do you find it a bit ironic that WWE had nothing for you despite the carnival history of professional wrestling?

My skills were never in question… Reviews from my producers and coaches like Arn Anderson, Ricky Steamboat, Mike Rotundo, Dean Malenko, Dr. Tom, Dusty Rhodes were very good… I think it was more a case of lack of fitting some B.S. cookie-cutter mould… Vince and his billion-dollar case of A.D.D. wants Ken Dolls sports entertaining (not wrestling) against other Ken Dolls at the moment. Me looking weird or different didn’t compute with the tunnel vision that WWE sometimes has even though Rob Zombie, Marylin Mason and Hot f**kin’ Topic retail stores are all the rage with the kiddiez… I have no idea why different isn’t a good thing at WWE…? If everyone looks and wrestles the same— where is the fun in that? When you go to the circus you want the variety of Elephants, tight rope walkers, clowns, monkeys, fire eaters etc… Sooo why does that NOT apply to wrestling as well???