The Unauthorized History of D-Generation X is the first WWE autobiography released in a PG environment despite the subject matter extensively being marred in so much un-PG rated material. DX, as you probably know – if you’ve had any sort of knowledge of the WWE in the past decade or so – are a group that originally formed from remnants of the Kliq, a backstage group that consisted of Shawn Michaels, Triple H, Scott Hall, Sean Waltman and Kevin Nash. Its current incarnation consists of Triple H and Shawn Michaels and more often than not they equal a huge payoff to the WWE with merchandise whenever they are around. Now it was time for them to break into another medium by writing a book, and with a group like DX who made such an impact on the WWE at the turn of the century, this book had the potential to be quite the interesting read. 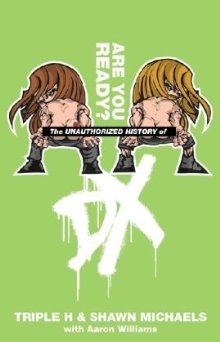 To start off don’t let the title “Unauthorized” fool you, this was written with the full blessing of the WWE. In a rather bewildering move DX immediately informs the reader that the book isn’t the whole story, thanks to the WWE being a “family friendly business”. This isn’t the only time they bury themselves, and starting off a book by telling the reader that they aren’t getting a full story despite paying for one is as stupid as it gets.  At one point they admit that DX is the WWE “bullpen”, meaning that they are brought out whenever creative is in a jam and need something. They dress up that statement as a good thing, but I see it as admitting that they represent a creative dead-end and a lack of ideas.

Also the terms “revisionist history” might as well be stamp across every page. DX would have you believe that they were single handily responsible for ushering WWF’s dominance over WCW in the ratings and ushering the Attitude era. If you listen to DX, it had nothing to do with Stone Cold Steve Austin, nor his blue collar badass gimmick. Shawn’s drug problems are basically skipped over, if you didn’t already have enough reasons to hate the new PG direction the WWE is going. Triple H does mention that he once “took some of Shawn’s old pills”, but the context of that is the storyline when Stephanie slipped Shawn a Mickey and Triple H is proclaiming he was tolerant to Mickey Fins (Mickey?). I’d say the book is being written in kayfabe at this point, but that wouldn’t work because it isn’t even remotely involved with the storyline; it’s just Triple H trying to be funny.

The book is divided up into three parts, each representing a stage in the history of DX. Act 1 is the groups initial formation, Act 2 is the DX army, and Act 3 is DX after Shawn’s return from injury. Act’s 1 and 2 stick close to reality (well, DX’s take on reality) but Act 3 completely abandons reality in favour of being written in storyline. In lieu of talking about their actions from a backstage perspective, they just reiterate the storylines down to portraying the other wrestlers as characters as oppose to as human beings. Act 3 is also disturbing because it contains several pictures of wrestlers being thrust into other wrestler’s buttocks. What, we can’t hear about Shawn’s personal demons in any detail but we can see a picture of Big Show’s ass?

Being DX you can be sure that they will bury anyone and everyone who isn’t in the WWE’s good books. It literally takes them all of two pages to bury Eric Bischoff and Hulk Hogan.  Bischoff gets a huge burial near the end where Hunter and Shawn go off on a needless tangent and attack every aspect of the man. They incorrectly label him as the sole reason for WCW’s failure and remark how he must’ve been tearing himself up inside to work for the WWE and taking their jokes. Evidently DX can add the title of psychic’s to their repertoire if they can make such a character assessment on nothing more than their own conclusion that he isn’t a business man. Another big name, unsurprisingly, gets a bad rap on behalf of DX and if you know anything about Shawn Michaels history I’m sure you can guess at who it is. Bret Hart is mocked, insulted and ignored, which oddly is an insult as well. DX don’t actually tell you what happened during Survivor Series unless it’s how “Bret refused to do business”, so unless you know what the Montreal Screwjob was Bret is essentially vilified.

And finally we come to my biggest gripe -the humour, oh the humour. Throughout the book, Shawn frequently breaks away from the story to plug WWEShop.com. It’s more forgiving when they do this on TV, but plugging WWEShop.com after they’ve gouged us for an over-priced book like this just makes DX seem petty.  In Act 3 the “humour” gets ramped up with an abundance of Triple H’s attempt at crude jokes in a PG environment. As for the writing … well the writing just isn’t that good. It’s written almost like a glorified interview – more so then in The Hardy’s autobiography. At least in ‘Exist 2 Inspire’ the brother’s information was divided up into separate sections within chapters and they never interact through the text. In DX’s book it’s written just like an interview you’d read on the internet, down to the format of being divided up by “SHAWN:” or “HUNTER:” and DX talking to each other mid story. Combined this poor format with DX’s petty, nebbish humour, it’s ultimately just devalued it as a book.

I’m going to be honest with you, the first thing I did after finishing this was research my local book store’s return policy. I cannot think of a single redeeming feature to this book, nor can I seriously advise this to anyone – not even kids. If you have a little one who loves DX, I suggest not letting their grasp of wrestling history by tainted by this book. After reading it I was reflecting on what I had just read and I had the thought that I had seen old war propaganda films that had more truth then this book. Suddenly it dawned on me what this book was – propaganda. Propaganda for their new “DX Army” meant for younger people to see DX as supermen and not as middle age guys making crude low-brow jokes.