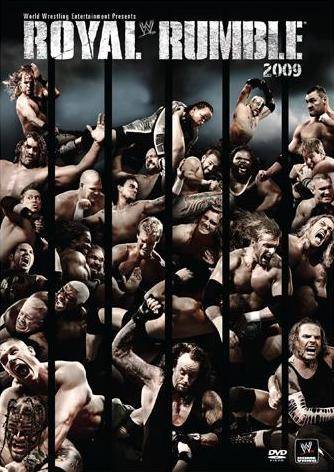 The event starts with a nice little look at Rumbles past, including a few I mentioned above, before we cut to a montage of the wrestlers competing in this year’s event… until we get to Randy Orton, where the production crew earn their crust by putting together an awesome (and stunningly edited) highlight reel of the weeks leading up to the PPV (kicking Vince). With only the main titles on the line on the undercard, the 2009 Royal Rumble, at least on paper, looked to have the potential to be a stellar event.

The ECW Championship Match between Jack Swagger and Matt Hardy was the best bout that title’s had since the glory days of John Morrison v CM Punk. I make no secret of my love for all things Jack Swagger (I predicted greatness the minute he set foot in the door and I stand by that claim), the guy just has “it” and, once nurtured and allowed to grow as a wrestler, has the potential to headline the company for years. I’ve not been this excited about a newcomer since Brock Lesnar. It doesn’t hurt that he has fantastic entrance music either.

Matt Hardy, on the other hand, is (with the possible exception of Finlay) the best wrestler on the roster for making an opponent look good. The two together, in a rematch for the title, put on a great opener that has the fans into it from the start. The story of the match is told both logically and beautifully, with a nicely worked finish. It was also a bonus to have Matt Striker on commentary duty; he is the best addition to commentary since JBL left the Smackdown announce position.

Following on from that, Beth Phoenix (with Santino Marella) and Melina, two women who work great together, add another chapter to their rivalry. Unfortunately, this bout is not a patch on any of their earlier outings and, for WWE’s eternal shame, Santino is underused at ringside. If any match can be skipped on the disc, this would be it, but, for the Half-crab-into-kicking-herself-in-the-head spot from Beth to Melina.

The storyline between HBK and JBL, while starting shakily, was expertly worked by both men (hardly surprising when you have two masters of the promo going face-to-face). Going into this match, JBL had Michaels in his corner and, in the lead up, Cena has been superkicked by Shawn and Clothesline-from-Helled (it’s a word, lol) by Bradshaw, so the odds were well and truly against him.

There will be a lot of fans out there who will have said that JBL v John Cena has been done to death and, for the most part, it has, but, and it’s a big but, most of their matches have been entertaining. The addition of HBK in JBL’s corner added an extra wrinkle and also left the outcome in some doubt (a rarity in this era of pro-wrestling). Both men pulled out their usual repertoire and put forth a heated match in front of a hot crowd. HBK did his job at ringside nicely, the announcers put over the importance of the bout and the various outcomes and the finish is a work of genius and plays with the crowd’s emotions beautifully.

Closing the undercard, we have another round of the Jeff Hardy/Edge rivalry that has its roots from almost ten years ago in the tag ranks. It really is amazing to think that there is a rivalry in WWE that has been going that long and still gets the fans excited every time they face off.

A video package preceding the match highlights all the “accidents” that befell Hardy in the lead up to the Rumble, with the idea that the returning Christian was behind all the mishaps, even though all the accusations were being slung in Edge’s direction. Some people say it made Jeff look weak going into the PPV, with him not actually wrestling on the shows, but I feel the opposite. It gave Hardy more sympathy with the fans and also left him with a reason for overcoming the odds (something every face should have to do).

As for the match itself, I have only good things to say. Vickie Guerrero was brilliant before the match started, both wrestlers were on the top of their game (the No-DQ ruling helped), the crowd were super-heated throughout, Tazz and Jim Ross were on fire on commentary and the action was hard-hitting and featured nice evolution from their previous encounters. As for the finish… well, let’s just say that things changed forever and, even though it wasn’t Christian (rumour has it Vince McMahon altered his plans at the last minute due to internet leaks), the perpetrator was no less important. As a last point, credit where credit is due; Edge’s reaction is what makes the finish work so well, so he deserves some kudos for that.

With the fans drained from the action and finishes of the previous two matches, you’d be forgiven for thinking that they would be somewhat muted for the main-event… and they possibly would be if the main-event wasn’t the Rumble match. The format works for those with a short attention span and also goes by so quickly, the fans don’t get a chance to be bored.

Before the match, there is (what appears to be a now customary) countdown of facts and figures from the previous events. Most of them are the same as last year’s, but some have changed (the number of wrestlers to have competed, appearances, etc).

The 2008 Royal Rumble started out with HBK and Undertaker (who were the last two standing in the awesome 2007 Rumble); the 2009 Royal Rumble couldn’t have started any differently as Rey Mysterio and John Morrison were #1 and #2 respectively. It should also be noted that Jerry Lawler and Jim Ross are reunited on commentary duty for this match.

Carlito, one half of the WWE Tag Team Champions, joins us as #3 and then, from there, the entrants start to flood the ring at ninety-second intervals. The action is exciting (especially considering there is little scope for actual wrestling moves) and even though the competitors feature the usual bunch of no-hopers and outside chances, and there are very little in the way of surprises (although the one major surprise is VERY well received). The countdown clock still has the power to get you anticipating who is going to be next and the Royal Rumble match is possibly the greatest example of keeping the fans guessing you will ever see.

The Great Khali entering the match is the first “OHHH” moment, with Vladimir Koslov following him immediately afterwards and getting a huge rub by eliminating the massive Indian on his own. This was to be expected, to be fair, as it was in the middle of the Russian’s monster push on Smackdown. Triple H comes out at #8 (which was a big surprise to us watching at home and those in the arena, as the big names are usually kept until late in the match unless they are the first two entrants). The #9 entrant is even more of a shock and, from there, the story of the match unfolds.

There is only one surprise entrant (#25), but he easily gets the biggest and most sustained reaction of the night, and, by the time #30 appears, things are laid out for a grandstand finish (even though, with the preceding angle coming in, the result was as obvious as Kurt Angle kicking out of every finisher in the and locking in hundreds of ankle-locks in his matches). The announcers are sublime in getting over the importance of winning the Rumble and the last six men in the bout work their asses off until the end.

A really, really good Rumble that, while not reaching the heights of the previous two years, is still an astounding outing that also has a brilliantly booked segment between the brothers Runnels (Goldust and Cody Rhodes). Oh, and as a last note on the match, #28 is one of the greatest moment of any Royal Rumble in history.

Normally, on these extras, a backstage interview is used to pad things out, but, in this case, it really is an additional extra. The #25 entrant, Rob Van Dam, gives us the low-down on his one-off appearance and gives a subtle dig to “other promotions” into the bargain.

The second extra is simply a segment from RAW that chronicles Orton claiming that he cannot be fired due to suffering IED and, that if he is released, he will sue the company due to the legally binding contract he has to main event Wrestlemania. If fired, Orton will “cancel Wrestlemania”. It’s a powerful segment, but without the context of the earlier and later parts, means it loses some of its impact.

A great pay-per-view that kicked off with a bang, stuttered with the second match, but picked up steam again with the third and kept that momentum until the Rumble was over. Even though we’ve seen JBL/Cena and Jeff/Edge many, many times before, there were enough additions to the mix to keep both matches fresher than they had any right to be.

The Rumble itself, like the WrestleMania name, sells itself. With some great exchanges between the wrestlers (Orton hitting multiple RKOs will never get old), rivalries and storylines being continued and/or advanced, an almighty one-night-only surprise return and a (surprisingly?) popular result, the 2009 Royal Rumble can go in the record books as a success.