In probably one of their most brilliant marketing moves this year, the WWE waited until just before Christmas to release ‘Behind the Mask’; the autobiography of none other than Rey Mysterio. 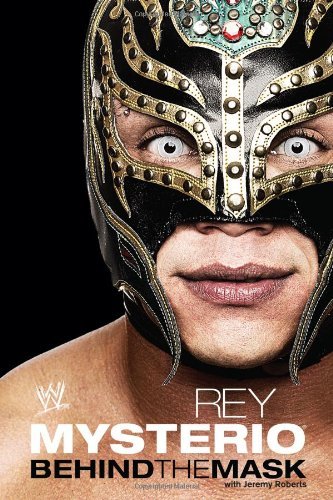 Rey Mysterio, otherwise known as “hey what’s that blur on my television screen?” is the latest wrestler to release his life story for the legions of interested fans. Along with being one of the WWE’s top performers and an icon to the mass of younger wrestling fans, releasing his autobiography before Christmas was a genius move for sales. With so much to cover in his storied career it has to be one of the most anticipated wrestling biographies released for some time…

My first impression of the book was good, it’s quite an easy read; Mysterio could be sitting in the room talking to you personally. It’s certainly accessible to anyone who doesn’t know anything about wrestling or the Mexican wrestling scene as Rey explains the basics of both industries. However once I finished it, I found it feels rather short and light which is odd considering it covers 34 years. There’s plenty of interesting stories about Rey’s childhood, wrestling training and his stints in Mexico, ECW and WCW but they dry up around the time of his signing with WWE. He begins to focus more on the in ring storylines and towards the end of the book he just speeds through everything, at one point summing up entire years in the space of two paragraphs! Essentially the time given to his career in WWE just seems lacking.

The format of the book leaves much to be desired – it’s divided into chapters with a number of subtopics in each chapter, much like Batista and Eric Bischoff’s autobiographies. I certainly wouldn’t call this a useful addition because it makes it feel more like you’re reading an interview from the subject as opposed to their autobiography. One of the inherent problems with this is that it’s very easy for the focus of the chapter to jump all over the place. At one point Rey is talking about his success in Mexico, jumping to his superhero costumes he wears for special occasions like Wrestlemania before coming full circle back to talking about Mexico. Good formatting could probably pull this off, but the subtopics just make the changes abrupt. But then again, what does format matter as long as the content is good? Well things started off great with Rey’s cheery attitude, explanation of the inner workings of Mexican wrestling, and humorous personal stories, all of which drew me in quite effectively.

“In 2007 I had a chance to work with him [Sabu] at the ‘One Night Stand’ PPV. I was the World Champion then, and the title was on the line. He nailed me through a table outside the ring with a DDT, but he used so much force that not only did he send me through the table, he put him through it as well. The medical people came out and the match had to be stopped. If it wasn’t for that, he probably would have won the match; he was really on fire that night.”

…he comes out and says this, which will take any immersion you had and snap it neatly in half. I actually had to stop and comprehend what I had just read because I was utterly bewildered. A lot of wrestling books have a problem of meshing kayfabe and reality but this might be the first time where I’ve actually seen a wrestler trying to convince us in their autobiography that what’s happening in the ring is real. He has this annoying problem of writing wrestling matches as if they were genuine, treating his opponent as if they are the character they portray in the ring. But even here he’s not consistent: at times he’ll talk about how another wrestler was furious and beating him as if it was reality. Other times he’ll talk about how he botched a move and what they were supposed to do, talking about the wrestlers as if they were the people behind the characters.

And then there’s also that whole Chris Benoit situation that has caused the WWE to relentlessly censor anything related to the man. Would it have been too hard to allow a friend a short paragraph talking about how he was deeply saddened by the tragedy, not glorifying Benoit in anyway? In short, yes. Benoit is mentioned twice in Mysterio’s book, once off hand when Rey is talking about a bunch of wrestlers (the Radicalz) who jump ship from WCW to WWF, and at the end in the acknowledgments when he tributes his friends that have died young. Only Chris Benoit gets no tribute – Wild Pegasus does. Come on WWE are you so scared of revealing that wrestlers cared about him that the only way to show any sentiment is to refer to a 20 year old moniker?

Before I conclude this review there’s just one more gripe with the book that I feel needs to be brought to light – the cover art. This might qualify as a petty but it really was a piss poor attempt by whoever designed it. This is Rey Mysterio, a man known for his ornate costumes, colourful pyrotechnic explosions and whose entrance video is a psychedelic blend of flashing colors. The best way they thought they could illustrate that was with Mysterio wearing a black mask on a black background looking like a corpse! The appearance is made even worse by his eyes …yes he explains that the white contact lenses have a symbolic meaning to him and its part of his costume but it really doesn’t help him look any better. But a cover shouldn’t make or break whether you buy a book…it’s just a little creepy having a dead-eyed, corpse-like picture of Mysterio staring at you when you’re not reading.

So is ‘Behind the Mask’ a good book? Well that’s a difficult question. I remember us being promised an autobiography of Rey Mysterio’s life and what we got was an overview which never really went into any depth about anything. But then again I’m a critic who has an understanding of what is omitted so it’s more frustrating to me when I notice these. But if you have a little one who loves Rey Mysterio this would certainly make for a good gift. And I see a lot of potential – Rey surely has more stories that he is holding out on thanks to the WWE’s PG rating and he could probably put together a more fitting autobiography in the future. Until then, ‘Behind the Mask’ will prove adequate for fans – it’s not bad, just shallow.