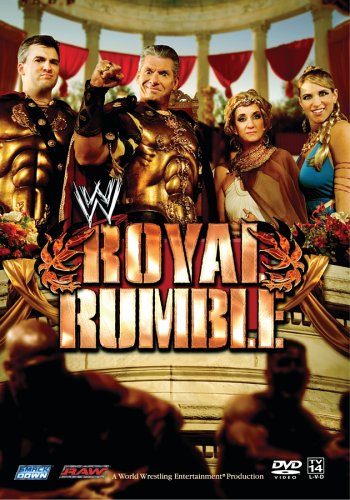 Definitely a short card, but with a 60 minute plus match its understandable.

The month was January, the year 2006, and the second of the two monthly Pay-Per-Views was Royal Rumble, taking place in Miami, Florida. For the second PPV in a row the card focussed around one big gimmick match, this time the Royal Rumble match. Also, for the first time since 1999, the winner of the Rumble match was by no means as predictable as previous years, with Randy Orton, Rey Mysterio, and Triple H all in the mix as far as winners go.

The PPV kicks off with the Cruiserweight Title Invitational Match, involving five former Cruiserweight champions and the defending champion Kid Kash. Bizarrely, despite a title defence for Kash being announced on the SmackDown! before the Rumble, the details of the match were unknown until Tony Chimel announced them before the wrestlers made their entrances. The surprise inclusion of Gregory Helms, a RAW superstar, was a nice little reminder of the inter-promotional PPV that the Rumble is, and thus any former champion is eligible, not just SmackDown! contenders.

As you’d expect from six top cruiserweights, the action is fast, furious and constant. Also, with six men, it allows the continuous action not to get repetitive, and the wrestlers can perform more in short bursts rather than stretching it out over long periods. There is also quite an unintentionally funny part during the match where Paul London does a Shooting Star Press to the outside, but the wrestlers waiting for the move don’t seem too happy about being hit, and try to duck out of the way. But overall this was definitely a fast-paced and entertaining way to kick off the event.

Throughout the event we get what seems to be becoming a Rumble re-tradition, with wrestlers picking out balls for their Rumble entry numbers instead of the draw “taking place” off screen. I normally think this is entertaining, but the over-powering presence of Vince McMahon did ruin it a little. The other slight complaint about this is that by showing the wrestlers reactions, it takes away the surprise when it comes to the Rumble itself.

Our next contest sees everyone’s favourite hot mentally instable psycho Mickie James taking on Diva Search 2006 Winner Ashley, with WWE Women’s Champion Trish Stratus as referee. This match was built up by Mickie’s obsession with Trish boiling over to a point where she attacked Ashley due to jealousy. This led to a “Trish Stratus” celebration where Ashley encouraged the entire arena to chant “she’s a psycho”, which unfortunately didn’t catch on with other crowds.

No offence to Trish intended, but with any special guest referee, and the lack of experience they have at officiating, it makes you appreciate how good your average RAW or SmackDown! referee is. Of course, officiating is a tough job, and can lead to drastic life changing moments, such as Tim White’s depression. And that’s just not wise. Anyway, talking of inexperience, Ashley shows that she still isn’t ready for wrestling live matches on PPVs, I always disagreed with WWE’s policy of her wrestling just two weeks after the Diva Search, and the poor girl never had a chance of making an impact. Maybe if the WWE hadn’t released the rest of the division there wouldn’t have been a problem. Unsurprisingly the match is rather slow, and messy, but it kept the fires of the Trish/Mickie feud alive.

Our next match is between “Wrestling God” JBL and The Boogeyman. The Boogeyman started this feud rather at random, just interfering in one of JBL’s matches with Matt Hardy for no real reason. The feud continued to develop with Boogeyman interfering in JBL matches, most notably costing him a match with Lashley. But perhaps the most memorable moment during the feud occurred when Boogeyman licked, bit off, and then ate Jillian Hall’s facial growth. I personally enjoyed that part, mainly because the growth left Jillian’s face never to be mentioned again, and now people can see she’s attractive.

Quite bizarrely, yet also probably a wise move, this match is given just three minutes bell to bell, and is really nothing more than a squash match. Whilst I’m a fan of The Boogeyman, I’m also a JBL fan, and I was surprised that JBL of all people was given such shoddy treatment. Whilst I have no objections to the Boogeyman’s push, I feel a lesser talent should’ve been used to put him over.

It’s now time for the… ROYAL RUMBLE MATCH?! That should just about display my shock and displeasure at the fact the Rumble match was bumped down behind both World title matches. The Rumble match is probably the second most important match of the year behind the WrestleMania Main Event, and it deserves to be the main event of a show every time.

As I said earlier, most Royal Rumble matches are of a high standard, as it’s pretty hard to make them bad. This match certainly lived up to the expectations befalling a Royal Rumble match, with continuous action from start to finish, several entertaining little spots, but naturally it’s not completely perfect. I personally didn’t like HHH eliminating all of his closest rivals, nor did I like someone being eliminated by a wrestler not involved in the match. But a Rumble match is a Rumble match, and baring in mind the final three competitors are the three people thought to be in with a chance of winning, it’s a very tense and exciting finish.

The next match sees Edge defending(!) the WWE title against John Cena. According to reports both before and after this match, the winner of the match was highly in debate, as Edge’s title reign had grossed the highest RAW ratings for 3 years, and had generally been accepted as a good champion. He was also promising not to be a “transitional” champion, even though the definition of transitional champion was not the situation Edge was facing. Many expected, but even more hoped, that Edge would walk out of the Rumble as champion.

Cena comes out to a very spectacular entrance that involves a series of ramps and more ramps, and jumping into the ring. Very impressive it may be, but it’s not exactly going to cover up his weaknesses. The match is pretty good, and that owes a lot to Edge’s ability, as it has been well-documented that John Cena isn’t quite the wrestler that Edge is, nor most other wrestlers in the WWE. I won’t lie; the result of this match displeased me. A lot. Enough to actually taint my opinion of the show, because I feel the WWE missed a beat with this decision and have paid for it since.

Following the match we get a little appearance from WWE legend Hacksaw Jim Duggan, which for comedic value is quite good, but also a little on the wasting time side.

Our final match, and I don’t think anyone had this predicted in the slightest, is Kurt Angle defending his World Heavyweight Title against Mark Henry. This all came about when Batista injured HIMSELF at a house show, causing the World Title to be vacated. Kurt Angle moved over from RAW in a bafflingly strange manner, with his “contract on RAW expiring”, and won the title in a Battle Royal. Mark Henry then defeated Rey Mysterio for the #1 Contendership, and proceeded to quote:

And now we come to the match, which is bizarre enough to warrant its place on the card. It doesn’t help as a viewer to watch hundreds of fans leaving the arena, obviously not bothered too much about the match that was billed as being the most important on the card. But in addition to that, we also had Kurt Angle having to cheat, cheat, and cheat again in order to retain his title. I’m a fan of Mark Henry, but I can’t see any reason why he couldn’t have just lost cleanly and be done with it, it’s not as if anyone expected him to win.

And then things turn really, really bad, with The Undertaker riding down to the ring on a horse. Then he collapses the ring with a lightning bolt. No, I’m not joking. I would really, really love to describe this last part of the show in more detail, but it has taken extensive psychotherapy treatment to burn the memory out of my mind, and I fear that remembering it again may drive me to insanity. In any case, it’s a HORRIBLE end to the show.

New Year’s Revolution picked up the recent trend of poor DVD extras with some good exclusive material, can the Rumble match it?

Of all the extras, the Rumble winners is by far the most useful, it’s a nice retrospective look at the winners. The Tatanka/RVD segment is easily missable, and the Angle/Henry story is on the show anyway.

In conclusion, I would definitely suggest avoiding this DVD unless you are a collector. I personally found a large majority of the PPV to have several poor booking decisions that REALLY angered me as a WWE fan, to the extent that this show very nearly suppressed my interest in wrestling in general. The extras also add little to the show, and whilst the Rumble carries some of it, the appalling decisions in match order, occasionally winners, and the ending of the show make this PPV a complete thumbs down.

For a review of the show including more focus on match winners, why not read my The Good, The Bad and The Ugly – Royal Rumble edition?