Right – no beating around the bush here. This is the worst WWE DVD release of 2006 and is definitely not recommended. It was the worst pay-per-view of the year by far, for a variety of reasons of which I’ll go into shortly. It was a show so poorly received by both fans and critics alike, inside and outside WWE, that it resulted in Paul Heyman’s latest, current departure from WWE creative. This event was the final show to be booked by Paul Heyman, and even though many felt it was a perfect example of Heyman attempting to write for Vince McMahon’s vision of ECW, rather than providing his own, unfortunately the buck stopped with Heyman, and to him the brickbats and virtual firing went. 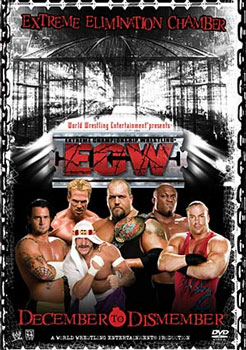 Disc 1 Chapters: 10 chapters. These are entitled:

The first match on the show was the sole good one. The Hardys defeating MNM was full of high spots and high impact moves. The crowd were really into this match and it was very enjoyable to watch. Unfortunately the show went downhill from here. Balls Mahoney vs Matt Striker was a bad match that wasn’t very entertaining. They did an angle backstage during this show, pulling Sabu from the main event, after he was advertised for it weeks in advance. His replacement was Hardcore Holly, who was seen by practically everybody except Heyman as a poor substitute for someone like Sabu. Sylvester Terkay & Elijah Burke vs the F.B.I., Little Guido & Tony Mamaluke was like a lengthy squash free tv match, featuring four wrestlers who weren’t over a lick. In yet another bad match following this, Daivari defeated Tommy Dreamer. Yes, on an ECW branded ppv, one of the few survivors from the ECW glory days was jobbed out clean to a ubiquitous WWE jobber. Another ‘great’ move. The worst match on the show came next – a mixed tag team match featuring Mike Knox & Kelly Kelly vs Kevin Thorn & Ariel. Three heels with go-away heat and one sort-of babyface Diva who would have a hard time arm-wrestling, let alone pro-wrestling. The main event Extreme Elimination Chamber match was a decent match. For nostalgia sake, it might be worth checking out, especially as it features three guys no longer with WWE (Big Show, Test, Rob Van Dam) and two others, Bobby Lashley and Hardcore Holly, no longer on the ECW brand. The wrestlers all brought their own weapons to use during the match. The major problem with this match was that Lashley won it (and the ECW title), but he was not the crowd’s choice to win (CM Punk and/or Rob Van Dam clearly were), and thus they booed when RVD and Punk were eliminated, and also a good portion of the crowd booed Lashley upon his win. The show ended at the 2 hour and 26 minute mark, making it much shorter than normal WWE ppv’s.

Disc One’s seven extras are a waste of time. The first six extras are very brief (30 to 60 seconds in length) soundbite promos from all six Extreme Elimination Chamber participants, post-match, after the ppv main event, all taped backstage. Some of the wrestlers, Rob Van Dam and Big Show are still bloody. All basically put over how gruelling the match was. Lashley does the longest promo, overjoyed that he’d won the title. The final, seventh extra is the Bobby Lashley vs Big Show rematch from the ECW tv show a couple of nights later. Again for nostalgia purposes, this might be worth checking out as it was Big Show’s final match on WWE tv before he left.

This is an abysmal DVD, featuring a terrible show and containing virtually no incentives to buy it. Definitely not recommended.

Following the publication of this DVD Review, I was contacted by a former member of the WWE writing team who witnessed many of the talked about backstage political machinations in the review. I am happy to make the following corrections:

1 – The event was not booked by Paul Heyman. It was re-booked, which is where the fight came in, by Vince McMahon the week of the show. Heyman had the title going to RVD. Vince insisted on Lashley. Heyman had a whole scenario where Lashley would turn heel. Vince re-booked it. Heyman and Big Show booked the Chamber so Punk would choke out Show in the first part of the match, and THEN Lashley would win the title. Vince changed that on Friday before the show, which lead to severe tension with Heyman and Show vs Vince.

2 – The ppv’s poor reaction was predicted by Heyman, on the record, all day the day of the show. Heyman was furious. Heyman did not want to appear on the show, because he thought the show would be so bad. Vince insisted. That’s why Heyman made his shoot comment about ECW lasting a long time after he’s gone. He was through that night. Heyman told me he was contemplating going home in the morning, but realized that would be a breach, and he could be sued.

3 – There was a huge argument on Vince’s plane the next morning between the two. Heyman was not backing down. There’s no nice way to put this. Vince boxed Heyman in the same corner he boxes Michael Hayes and Bruce Prichard and Brian Gewirtz, and they always fold their cards. Heyman said, in front of everyone, “I disagree, you know I disagree, so why are you pressuring me to just fold for the sake of folding?”

4 – Heyman’s dismissal was more of a resignation.Vince wanted ECW to go a certain way, and Heyman, in front of all the agents, told Vince “I think my time here in WWE is over.”

In addition, my article stated that the buck stopped with Heyman (it stopped with Vince), that Heyman booked the show (he didn’t, Vince did), and that Heyman was fired over it (he wasn’t ….. he remained on contract until a few weeks ago, and was even offered a renewal).

I hope this clears up any inaccuracies or mistruths.