This set is another chapter in the history of Extreme Championship Wrestling and will include matches the masses will not have seen. Never having been released on home video before, this is ECW Unreleased and THIS! IS! EXTREME!!! 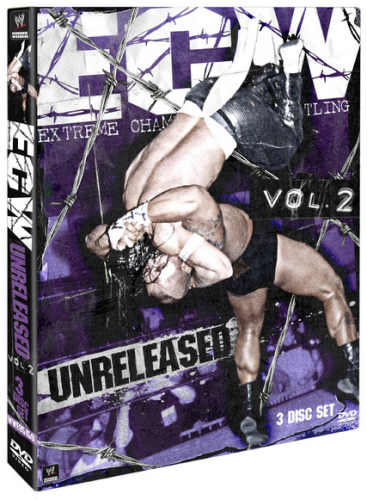 I’ve been a wrestling fan since I first saw WrestleMania VII in July 1991 when my cousin loaned me a tape of it he had recorded from SKY television. From that day, I have been a devoted wrestling fan and watched it consistently ever since.

The advent of the internet, especially the birth of YouTube has put more wrestling at the fingertips of more people than many thought possible during the dark old days of tape-traders. Since becoming a fan, I went back and watched all the WWE PPVs that I had missed until WMVII and have watched every one since.

I did the same with WCW (although that was a lot harder to garner until TNT started broadcasting Nitro regularly) and in 1995, thanks to the Superstars of Wrestling magazine (the predecessor of Powerslam), I was introduced to ECW via an article on one of the promotions most famous sons; Raven.

To say I was enamoured is an understatement. I was instantly captivated by this enigmatic character and sought out everything I could on both him and the promotion he called home. Once I had found a way to watch the shows, I sought out what I could and fell in love with Extreme Championship Wrestling. From there, the internet allowed me to watch the weekly shows and PPVs, while HMV also started selling video-tapes to cover the current PPVs and some of the older content.

Of course, now that WWE owns the library of virtually every wrestling promotion in America, they have put it to good use, with ECW always seeming to have a special place in Vince’s heart as it has had the most releases (going back to the amazingly good Rise & Fall of ECW).

With so much content in the vaults, it makes perfect sense to release collections covering the matches very few people will have seen at the time and no-one will have seen on home video. It’s that concept that leads us to this set of 21 matches from the early NWA-Eastern Championship Wrestling days and the ECW on TNN era that ultimately led to the closure of the company.

As ECW is my favourite promotion of all time, this review could easily have slipped into fan-boy praise territory, but I’m aware enough to remember that ECW had some shoddy content at times too, so the rose-tinted specs are not required for this one.

The matches on show try to cover the respective time-period shifts that ECW had (pre-Shane Douglas double-cross, hardcore-to-the-max era and the TNN era specifically) as well as feature as many talents as possible within the amount of matches available.

Because this is the second set to be released, you could argue that the better ones had already been cherry-picked for Volume 1… and you might be right. However, the matches on show here are all good-to-great and are well worth a watch as you pass through the years with Joey Styles and Tommy Dreamer as your guides.

The double-act is great and the sly digs at each other appear to be unscripted for the most part, which adds to the enjoyment. They also reveal some of the reasons why things happen (such as why Arn Anderson and Bobby Eaton wrestled in ECW while WCW-contracted performers), which add a bit of history to the matches on the discs.

Other things that are interesting include seeing characters in a different gimmick to what made them famous. For example, Taz as a bare-foot wildman in face-paint shouting “Tazmanian” during his matches, “Lionheart” Chris Jericho or the “attractive” Tommy Dreamer is MC Hammer pants and braces.

Match quality, as said, rarely dips below good, but some of the video / audio quality leaves a lot to be desired, especially on the older matches. Of course, this is to be expected for something that is close to 20yrs old, but seeing it on an HD-capable television enhances the visual flaws to distracting effect on occasion.

This is a must-own collection of matches from possibly the most beloved and respected defunct wrestling promotion in Western history. If for nothing else, simply to see a hairy, bare-foot, face-painted, Tasmanian-speaking Taz nail “GQ-level good looking” Tommy Dreamer in MC Hammer pants-with-braces with a Top-Rope Northern Lights Suplex just after Joey Styles says the fans are getting behind Tommy as the image shows the most apathetic bunch of wrestling fans you are likely to see.