I have to admit that there were huge parts of this book that I found extremely shocking. That’s not a comment about the quality of the book, it’s well-written and a good read. However, it makes you wonder how wrestling promoters let their roster behave in the way that they did. 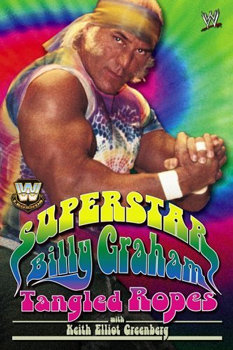 I knew the basic facts about Superstar Billy Graham before reading this book. I knew about how he created a character that was utlised by other wrestlers such as Jesse Ventura and of course Hulk Hogan. I knew about the fact that his use of steroids over a long period of time led to serious health problems and was probably the reason it was Hogan who became the real superstar. But there’s a lot more to Billy Graham than those bare facts.

Yes, Graham helped change the face of professional wrestling with his Muhammad Ali inspired promo’s and yes he won the WWF Title but there’s a heck of a lot of his life he should be thoroughly ashamed of. It wasn’t just steroids that he took, at times I felt I was reading a chemistry text book such were the huge number of drugs mentioned that somehow found their way into and helped destroy his body.

He wasn’t the only one doing it by a long shot but just imagine for a moment instead of talking about the behaviour of Graham, The British Bulldogs and Big John Studd, we were talking about Beckham, Rooney and Owen. That kind of behaviour would be the lead story on the news.

It’s not just the drug taking that puts Graham in a bad light and sadly overshadows his wrestling career. He lied to himself for years as whenever one health problem arose he just took more drugs as if that was a cure. It’s the way he treated the WWF that is truly appalling. Vince McMahon (and his father before him) gave Graham plenty of chances to stay on the payroll even when his career in the ring was over due to the fact the steroids etc were destroying his bones leading to a hip transplant, liver transplant and other operations.

How did Graham treat Vince when he was finally released? He lied about the steroid use in the company on TV, accused Pat Patterson of sexual abuse against young boys and then tried to get money out of the company because of his steroid use! Without him, Vince might not have had to stand trial but eventually he forgave Graham but Patterson never has.

Graham didn’t have an easy start to his life with an abusive father, then getting into trouble with the law on a regular basis and finally finding and losing religion, having numerous marriages (one to a lesbian) before finally becoming a body builder and then a wrestler.

There are some great stories in here about how the wrestlers did their best to keep kayfabe. Graham remembers having to put up a ring by himself because a heel couldn’t ask a face to help him. There are plenty of blading stories here and the story of how Lou Albano nearly gave the whole game away in Madison Square Garden.

An interesting part of the book is how Graham became depressed after losing the WWF Title to Bob Backlund. When Graham got the belt off Sammartino he knew the date he’d win the title and the date when he’d lose it. The loss still hurt him though because he despised Backlund.

I hope any wrestler who is taking or thinking of taking steroids or any other drugs reads this book. It’s amazing the guy is still alive. I also hope future wrestling autobiographies concentrate more on wrestling rather than a personal history of drug taking.