WWE Survivor Series 2006 was a rather uneventful pay-per-view. WWE brought back the ‘traditional’ five on five Survivor Series tag team matches, with three such matches featuring on this show. All six teams were largely thrown together, with the likes of DX & the Hardys teaming with CM Punk, five wrestlers who were rarely (if ever) associated with each other. The matches on this show were largely just ‘there’, being neither good or bad. Probably the only notable things on this show were Batista regaining the World title from King Booker in an absolute snoozer of a main event, and Lita’s last appearance in the WWE, dropping the Womens’ title to Mickie James and being humiliated on the way out, courtesy of Cryme Tyme in an unentertaining segment. 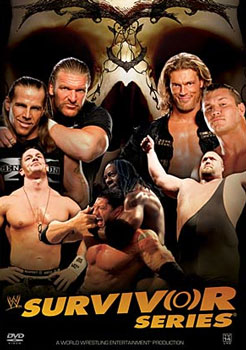 As far as the matches on the show, this is the lowdown. The opening legends match was a somewhat fun affair. Unfortunately, the Spirit Squad gimmick had long been buried before this match, and this was simply the final nail in their coffins, as the legends destroyed them in ten minutes.

In the best match on the show, Chris Benoit beat Chavo Guerrero. Just solid, entertaining wrestling that the crowd eventually got into.

In the womens’ match, Mickie James defeated Lita in a decent affair. The segment afterwards where Lita was humiliated by Cryme Tyme was unfunny and needless, especially in comparison to the way Trish Stratus was allowed to gloriously depart two months earlier. Even though Lita was a heel, she still should have been celebrated on the way out, after giving 6 years service to the company, and at one time being incredibly popular and coming back from a broken neck too.

In the DX match, the heels were typically emasculated, losing in five straight falls. Yawn. Seriously, this was a total waste of talent. It wouldn’t hurt DX to put some people over once in a while, yet it never happens.

In a first blood match, Mr Kennedy defeated the Undertaker in a good match. They worked stiffly with each other and the match itself did a lot for Kennedy’s upward mobility and popularity. DX take note. MVP got involved in the finish as well.

In a terrible main event, Batista defeated King Booker. These two famously legitimately don’t like each other behind the scenes, and as a result, clearly can’t put their personal animosities aside to work together to put on a good match. This was one of the worst ppv main events of a major annual WWE ppv, that you will ever likely see.

Comments on other DVD features:

– Three DVD extras, the first two being around 2 minute in length each.

First extra is Todd Grisham conducting a sit down interview with Lita, supposedly after the Survivor Series ppv, so this was officially her final appearance with the company. This was weird, as she treated the angle of her being booed and disliked as legitimate, yet she acted like a babyface and took it all in her stride. As she was speaking they aired clips of the likes of Cryme Tyme, DX, and Hacksaw Jim Duggan making fun of her. She wouldn’t say whether she would ever return to the WWE, then smiled and thanked Grisham, shaking his hand.

Second extra was just weird. It was the short-lived WWE.com cartoon, ‘Mr McMahon’s Kiss My Ass’. This episode depicted McMahon (who voiced his own character), Rey Mysterio, Bobby Lashley, Victoria and Torrie Wilson sitting down to a Thanksgiving dinner. The Maitre De brought out a vegetarian dinner and a disgusted McMahon forced Mysterio and Lashley to make the Maitre De kiss his ass. Whatever. This was just weird and unfunny.

Third extra was the main event of the first ever Survivor Series pay-per-view from 1987. FINALLY – an extra actually worth something!!!! The match pitted Hulk Hogan & Bam Bam Bigelow & Paul Orndorff & Ken Patera & Don Muraco vs Andre the Giant & Rick Rude & One Man Gang & Butch Reed & King Kong Bundy in a five-on-five elimination match. Running 30 minutes in length, the match was introduced by Michael Cole and JBL, and actually voiced over by them too, so it wasn’t just lazily lifted from a prior release. Some effort and thought actually being put into an extra on a WWE dvd – what an amazing concept?! The match itself was so-so, but the announcing was great, as JBL and Cole reminisced about 1987, and in addition, put over a lot of the wrestlers in the match. Some of JBL’s brief stories about the antics of the likes of Butch Reed were great. If you like Cole & JBL’s announcing on Smackdown, you’ll absolutely love this match.

The pay-per-view portion of the DVD is so-so. It’s a passable event, and in a climate whereby there are upwards of 15 pay-per-views a year, that’s not really a good enough reason for buying it, unless you’re a completist. The first extra is okay, the second extra is just weird, and the third extra is outstanding – the best part of the whole DVD. When a near 20 year old match – an extra – is the highlight of a 2006 DVD, it’s probably a sign that you should avoid buying it.