By Chris Dewing
Wrestling Book Reviews
This page contains affiliate links. At no additional cost to you, we may earn a commission if you click through and make a purchase. Learn more

The wrestling character known as Kane debuted in September 1997 as Glen Jacobs portrayed the third of his WWE personas. The previous two, Fake Diesel and Isaac Yankem DDS, Jerry Lawler’s evil dentist, had very short shelf lives, yet the WWE persevered with Jacobs and gave him the Kane character. And for that Jacobs will probably be eternally grateful, as the WWE developed the character from a good starting storyline into one of the most fleshed-out characters they had produced in years. 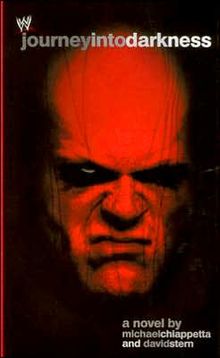 The WWE commissioning this novel, “Journey into Darkness”, continued the hard work they had gone to in order to develop the character of Kane, and the author Michael Chiappetta does a good job of tying up the loose ends that the WWE have accidentally allowed to creep in. For example, why did Kane wear a mask when his face wasn’t really burned? Why did Kane talk with a voice-box when he first arrived? (The answer to that question is pretty damn funny) Why do The Undertaker and Kane have such a love/hate relationship? And just who is Katie Vick? All of those questions and more are answered throughout the book.

The main plot of the story focuses around Glen Jacob Callaway, the name coming from a combination of Glen Jacobs, and Mark Callaway (The Undertaker). The Kane moniker comes from Glen and Mark’s mother, whose maiden name was Kane. The name carries with it a curse that hurts anyone who comes into contact with it, and given the background of Kane’s character, such as the fire in his childhood, we can see why this is the case. One other recognisable person to wrestling fans in the early chapters will be Paul Grimm, better known as Paul Bearer. The well-documented fire that absorbs Glen, killing his mother and step-father (Grimm/Bearer being his real father) is the focal point of the early stages of the novel, as we go through Glen’s experience from a third-person perspective, and the rest of the novel is based upon the problems he experiences at this time.

“The wonder of the world is gone, I know for sure. All the wonder that I want, I found in her.”

Those are the opening lines of Kane’s current theme music, “Slow Chemical” by Finger Eleven, and it sums up the middle part of the novel, as we explore the relationship between Glen and the infamous Katie Vick. We find out how they came to meet, how they came to develop a relationship, and how Katie came to die at the hands of Kane. Thankfully, Chiappetta has chosen to ignore the necrophilia angle that the WWE ran, and chooses instead to focus on the pain and torment that losing Katie drives Glen to give up his life as Glen Callaway and become a man who lives by the name of “Kane”.

However, Chiappetta doesn’t restrict the novel to scenes and times that the WWE have referenced in their development of Kane. He also brings in new parts to the story, such as Glen’s time spent with the Barrow family, a foster family that soon fall under the “curse” of the Kane name. We also learn about Glen’s superb skills at American Football, with even a Houston Texans scout approaching him for a place at his franchise. If anything, the additional background material helps to paint a picture as to why Kane became the monster we as wrestling fans know him.

Two thirds of the way into the book we finally reach the wrestling. There are occasional mentions of wrestlers Glen watches on TV, but nothing solid until this point. When Kane sees Bearer and The Undertaker on television he hunts Bearer down and reveals himself to the man he will later discover to be his father. Bearer manipulates Kane into becoming his ally in an attempt to gain revenge against The Undertaker for dropping Bearer, and then throwing a fireball in his face.

Throughout the final stages of the novel it is interesting to note that the idea of kayfabe flip-flops around a lot. There are times when Glen and Mark are chatting to each other backstage, and other times when they are trying to beat each other senseless in the ring. Kane himself even makes reference to the fact that wrestling is fake, which seems a little odd considering that this is a WWE-produced novel. The novel ends around the period in late-1998 (yes, Kane’s one day WWE Title reign is noted) where The Undertaker and Kane make their truce and begin working together, with an epilogue tying up the loose ends at the end, such as everything that happens to Kane up to 2004.

So how does the book actually rate? First of all it is nigh on impossible to compare this novel to any autobiographical book the WWE have published, such as Mick Foley, Ric Flair and William Regal. Whilst those books focussed on the lives and careers of the subject, this focuses on one individual character within the wrestling world. As a concept, the WWE should be applauded for utilising one of their successful characters and gimmicks from the past decade and turning it into a full story that finally reveals the whole history of the man, or monster, known as Kane.

Personally I enjoyed the novel, and considering my initial reactions when I read the first chapter, that is somewhat of an achievement. However, I fear that it is unlikely to be accepted by fans knowledgeable about the wrestling industry purely because of the suspension of disbelief that is needed to believe that this is the true story of Kane, which it of course isn’t. I am sure that smart fans will make light of the fictional nature, when they would rather read a non-fiction, autobiographical account of a wrestler’s life.

As a novel on its own, read by somebody with no knowledge of wrestling, it wouldn’t hold up for a second. The plot is pretty non-sensical, and if you didn’t know of people like The Undertaker, and even Kane himself, you’d probably be best off not even trying to understand it. For a wrestling fan with the ability to open their minds and find out about one of the WWE’s biggest characters, this book will be an entertaining read and something that will probably make you a little more of a Kane fan, even if he does have a limited move-set.

There is a surprisingly high amount of strong language used throughout the novel, which considering the target youth market they seem to be aiming for. Therefore, you should be wary before buying this for anyone under 18.

Overall, “Journey into Darkness” is a novel that gives a wrestling fan a unique opportunity to look into the history of one of wrestling’s most well-known characters. Your enjoyment of it will depend on your ability to take yourself away from the real world and into the kayfabed world created for Kane. Therefore I am going to give this a fairly average rating, it’s a good wrestling novel, a poor novel in general, with a story that, whilst compelling, also falls flat in places.