It’s been a long time coming, but now that it’s here, the big question is whether the first DVD devoted solely to the younger brother of The Undertaker has been worth the wait. 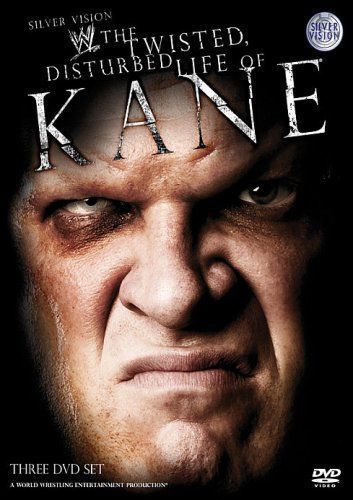 The set focuses solely on the Kane character, so there is no mention of Glen Jacobs’ career before WWE or when he was in WWE as both Isaac Yankem or Diesel MkII. While this is understandable, it is something I would like to have been included.

Another curious omission from the collection is Kane’s debut at the first ever ‘Hell in a Cell’ match in October, 1997. It is included in the extras, but it feels strange to not have it in the main feature. Instead, the set begins with the build to Kane’s debut match against Mankind that took place at the 1997 Survivor Series (an event made infamous for something trivial that happened later in the night). Because of this, the collection also omits the first four weeks after Kane’s arrival; a great period where he came out and just killed whoever was in the ring at the time (victims included The Hardy Boyz, Flash Funk, Ahmed Johnson, Dude Love and Vader).

Basically, what you get for your money is a collection of Kane matches, linked by the man himself (in character) that cover his entire WWE career as that character. The standard does vary, but the majority of the bouts are, at worst, decent. There are some very strange lapses, though, as Kane’s tag-team accomplishments (10 different reigns with six different partners) are overlooked, as is his turn in the 2001 Royal Rumble where he lasted a long time and set the “Most Eliminations in One Night” record with 11 guys thrown over the top by the “Big Red Machine” (a record that us unlikely to be broken and a record that should actually be 12 – Drew Carey, a surprise entrant, stepped over the top and dropped to the floor due to being so afraid of Kane; an act I feel should be credited as another Kane elimination).

For those who only know the current incarnation of Kane, his early work will come as a shock… as will his awe-inspiring physique for someone so large. Also, for those watching back for the first time, the effect of Kane setting fire to the casket with Undertaker in it will be diminished, but trust me, at the time it was a literal jaw-dropping event as it had never been seen before.

Some of the matches on show are better than I remember them, with his debut match being a success in putting over how dominant this new guy was. The first meeting between Undertaker and Kane was another interesting match (and the first time the streak would be in serious jeopardy – even though “The Streak” wasn’t really that big a deal at the time) and one that surpassed expectations. Both men did their best to put on an event to remember and even though the result is obvious, it is actually Kane who comes out of the match the strongest. This was also the first time we had the “Druid” entrance… and it is still awesome.

The first Inferno Match is a unique sight to behold and is another instance where the effect has diminished a little bit when looking back for the first time, but again, when we saw this at the time, it was an awesome spectacle. Austin v Kane’s First Blood match is a great piece of business with a great, multi-layered set of storylines running through it.

Kane v X-Pac inside the cage is another awesome match, with the frankly stunning sight of Kane leaping off the top of the cage to deliver a clothesline to his opponent. This spot is one that doesn’t diminish when looked back on. Also on the first disc, the Last Man Standing Match against Jericho is another well worked encounter.

Disc 1 closes with an OK Tables Match between Edge & Christian, The Dudleys (who look positively lightweight compared to their current physiques) and the Brothers of Destruction (Kane & Undertaker).

Things omitted from the time-period covered include, as mentioned, the actual debut of Kane, the rampage that plagued RAW for the first few weeks, Wrestlemania against Triple H, his monumental turn in the 2001 Royal Rumble, the first time Undertaker & Kane paired up and the subsequent fallout from that (including a great episode of RAW where the twosome came out and interrupted EVERY MATCH on the card to make a point).

Disc 2 marks the first appearance by Triple H as “The Game” defends his Intercontinental Championship in a Chain Match. This was during the “Two-Man Power Trip” era and Hunter was also one-half of the WWF Tag Team Champions alongside “Stone Cold” Steve Austin. The two men put forth a great effort and the match is a very enjoyable encounter for the IC belt.

Kane v Kurt Angle from Wrestlemania X8 is a nice outing that is the meat in a Kane v Triple H sandwich as the two men would meet in a unification match, Intercontinental Title (Kane) v World Heavyweight Title (Triple H), were the winner would take all.

Strangely, the match in which Triple H would defend the WHT against Kane in a Mask v Title Match is also missing from the collection. You’d think that Kane having to unmask, quite possibly the most major incident in the character’s history would get more than a recap promo (albeit, a very good one).

The unmasking led us to another cage match as Kane faced his former WWF Tag Team Championship partner, Rob Van Dam. Not as good as the earlier X-Pac/Kane brawl in the cage, this is still a decent encounter between two guys who have the epitome of  “contrast of styles”.

Following on from the RVD feud, Kane entered into a rivalry with Shane McMahon that stemmed from the former Tombstoning the latter’s mother after he was unmasked. There are two matches from this storyline featured on the disc and both of them, unsurprisingly, are gimmick stipulations.

The first is a good Last Man Standing match (with an awesome Coast-to-Coast), a stipulation which Shane had competed in a few times and usually ended with him either hitting or missing an elbow drop from the top of whichever set WWE were using at the time… and this is no exception.

The feud-ender is huge improvement and is, as far as I can recall, the only Ambulance Match in WWE history. Preceded by another brilliant recap video, the match is a logical extension from their previous bout and is particularly brutal, particularly with one of the participants being a non-wrestler (even if he is, quite possibly, the best non-wrestler to ever have a match).

The last match on Disc 2 is another stipulation encounter as he and Matt Hardy face off, with the winner marrying Lita, in a match that was the highlight of the mid-card for Summerslam 2004. The finish is brutal (listen to the force of the impact), but, unfortunately, real life prevented this feud from continuing as the Edge/Lita/Hardy love-triangle came to light and overshadowed the storyline love-triangle.

Closing the set are matches covering from September, 2004 until April, 2008, in which we have Lita turning heel (a decision made for the creative team due to the real-life situation between her, Edge and Matt Hardy. The fans were booing (the then face) Lita so much, WWE had no choice but to align her with Edge; a decision that actually paid off in the end as she was brilliant in the role and such a natural.

Kane’s match with HBK is very good, the Snitsky match sucks (but is included, I presume, to give the viewers of the collection closure with the “Lita’s pregnant” angle), and the two Edge encounters are super-heated contests (especially when Matt Hardy performs a worked-shoot run-in before the cage match).

The latter matches aren’t the first matches I would have picked for a Kane collection, but that’s not to say they aren’t worth watching. Kane v Umaga is hard-hitting, as is the (first ever) Belfast Brawl against Finlay. The singles match against King Booker is a disappointment, while the BoD v Booker & Finlay is a nice touch due to it being the first time they teamed in a while.

The last match, fittingly, is a bout against Undertaker after both men had won their respective championship matches at Wrestlemania (Kane defeated Chavo for the ECW Title and Undertaker made Edge submit to win the World Heavyweight Championship). This is a good bout and is a fitting way to end this retrospective on Kane’s career.

As much as I feel there has been a lot omitted from the set, it does have the most extras of any WWE release in recent memory. Nine extras spread over the three discs, you do get good value in that regard.

The first one is a 13min recap of what led up to Kane’s arrival in the company. This starts from Undertaker assaulting Paul Bearer and the rotund one letting slip that “Kane’s alive…” over the microphone. It’s a nice history lesson for those who missed it first time and is a sweet look back for those of us who were there.

The second is a brief little look at the history of Pete Rose showing up at Wrestlemania three years running. It was a nice little storyline that showed continuity and humour.

Disc 2’s extras are all promos and interviews that are a mix of serious and comedy. The first one is the legendary skit backstage with Rock and Hogan where Kane disses the Rock (“It doesn’t matter…”) and does an awesome Hogan impression (as well as unleashing the phrase “Kanenites” on the world. The other skits are a nice little bonus allowing you to see a different side to the man we know today.

Disc 3 has Kane’s two appearances at Wrestlemania 24. Both the Battle Royal from the pre-show and the ECW Championship match against Chavo Guerrero are shown, with the most ironic aspect being that an actual title match is the shortest extra of them all.

One of the best thing about the extras, besides their quantity, is that they are, for the most part, a decent length. 9-10mins are the average run time (with the first extra on Disc 1 going 12mins and the Kane/Lita wedding going almost 20mins), so you get good value there too.

The omissions are glaring, obvious and detract from the impact Kane has made on the company. To exclude his Rumble record (not even the extras make mention of it) is unforgivable and the lack of Brothers of Destruction action is a little disappointing.

That said, the content that is included is definitely worth watching, especially if you haven’t seen the masked days of Kane. The extras are really good (and are now the benchmark for future releases) and some of the matches are brilliant.

All in all, this is a collection that is worth your money. I just hope that, one day, a documentary will also be released in the future. It would be nice to have a look back at the career of Kane and have the viewpoints of the other wrestlers, Vince, etc in a series of talking head segments. They can even keep it to just Kane if they want to preserve the character.

Worth buying, but not the complete package is how I would describe this collection.