Thanks to those very lovely people at Silvervision this week I have had the pleasure of reviewing this year’s Royal Rumble. This yearly tradition has brought us some history making moments over the years from Ric Flair winning the WWF title as a result of winning the Rumble in 1992, the infamous casket match between Yokozuna and the Undertaker in 1994 and Shawn Michaels going on to win the Rumble in 1995 after drawing entry number 1. So would the 2005 Royal Rumble be able to provide us a piece of history of its own? 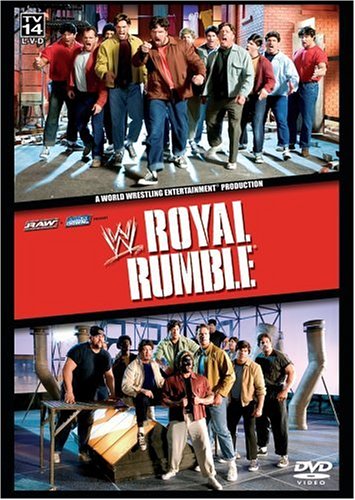 The card for this year’s Royal Rumble looked very impressive with each match promising so much which really got me excited about putting it in the DVD player even before I had watched it.

The event started with a bang as they put the Edge vs. Shawn Michaels match on first. This feud had been brewing for some time since Shawn won the vote over Edge to face HHH at Taboo Tuesday in 2004. With 2005 looking like it was going to be Edge’s year as he continues to try and push himself into the spot of top heel on Raw and HBK’s history at Royal Rumble events this had the potential to be a great match and boy did it deliver.

The crowd really got into this match as Edge and Michaels put on an excellent display of what a bad guy against a good guy should be as it took me back to my days of watching wrestling in the 80s. There were a lot of submissions moves, a standing counts, false finishes, counters…the works. Michaels really helped make Edge the star of the match using his power to help make Edge look good. The match had a classic ending with Edge getting the dirty win by holding on to the ropes whilst pinning Michaels down for the three count. One of the best matches I have seen in some time.

Before we got to the casket match between the Undertaker and Heidenrich we were greeted by another classic Snitsky / Heidenrich backstage segment following on from their skit at the Survivor Series 2004, priceless entertainment. The casket match was built well with the classic entrance of the casket with the druids which always adds to the atmosphere.

The match didn’t last long before Snitsky ran in to help out his psychotic friend from Smackdown and it looked like Heidenrich had once again got the upper hand on the Undertaker but in true casket match style Kane was lying in wait in the casket to greet the psychotic pair when they opened it. Kane levelled up the odds and fought Snitsky through the crowd to leave Undertaker to finish off Heidenrich with his trademark moves and roll him in to the casket.

Next up was the triple threat for the WWE title as JBL defended against Big Show and Kurt Angle. This match followed on the same scenario of JBL’s other title matches as the WWE builds the odds against him and somehow he has to find a new way of getting out of a seemingly impossible situation. In this match it was Angle and JBL who teamed up against the Big Show.

The match was carnage from the start as Big Show went through a table and then JBL and Big Show went through the barrier which was like a scene of crime for the rest of the night with yellow police tape taping the area off. Just as it looked like JBL was defeated by the odds as the EMT’s were called to help him first Angle’s boys Jindrak and Reigns came down to the ring to beat on the Big Show and then Orlando Jordan came through the crowd to get JBL back in the ring. Somehow through instinct JBL hit the clothesline from hell and picked up the victory.

Next it was time for the World heavyweight championship match between Randy Orton vs. HHH. Many thought this match would be saved for Mania so to see it now was a real treat. The match unfortunately wasn’t the best of the night as HHH continued his slump of uninspiring victories. HHH adopted the old classic break down a body part strategy as he worked over Orton’s knee but he couldn’t break Randy’s resistance until he brought his old friend the sledgehammer in.

It was now time for the main event the Royal Rumble. In past years it has been moved about the card but I was glad to see it back where it belongs as the main event. The Rumble had lots of funny sections including Hardcore Holly, Eddie Guerrero and Chris Benoit giving Daniel Puder his introduction to the WWE. The Rumble also served to develop many Wrestlemania matches as Angle took HBK out of the Royal Rumble and put the ankle lock on him outside the ring as Angle looked to have snapped without warning but as we later found out on Smackdown there was a reason.

The Rumble ending took you back to the Rumbles of 1994 and 1995 as we saw two wrestlers declared winners, as this year it came down to crowd favourites John Cena and Batista taking each other out of the Rumble. Vince McMahon was having none of this as he came down to ringside to tell them to restart the Rumble with Batista showing the heart of a lion to eventually pick up the win and secure his spot in the main event at Wrestlemania.

The DVD extras were good as they included footage on the history of the Royal Rumble, what lead up to this years event and what happened after it

The event was like a flashback to the 80s and 90s which I enjoyed and I thought was good to see although not all fans will be happy with that. I think there have been better Rumble matches but as a whole event it was one of the best Royal Rumble events with a strong undercard with every match giving us something.