By Simon Lamb
Wrestling Book Reviews
This page contains affiliate links. At no additional cost to you, we may earn a commission if you click through and make a purchase. Learn more

DiBiase was personally one of my favourite wrestlers of all time, and when his book came out years ago I obviously couldn’t wait to get it, particularly since I’d just read Mankind’s and assumed that every wrestling book would be just as good. When I got it, I was a tad disappointed purely as a result of my ridiculously high expectations. 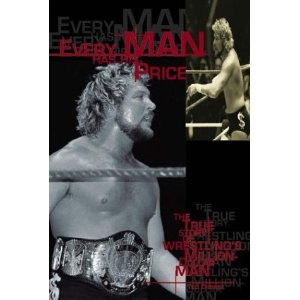 Every Man Has His Price

However, don’t let that put you off. DiBiase, bible lover or not, remains the man and writes an interesting book. What should put you off though is that you might buy the book expecting a book all about who hates who or who got on with who in the backstage world of wrestling. It’s not that type of read; instead it’s more about DiBiase’s life and career, and his turn to religion at a time when he was very screwed up. You shouldn’t be put off by the ‘Christian Living/Biography’ description on the back though.

Basically, if you’re a huge DiBiase mark then if you don’t already own the book then you should definitely get it. Otherwise you might be less enthusiastic, considering he talks more about what you reaaaallly want to know in his shoot interview (which will hopefully end up on the Sky digital Wrestling Channel) than he does in his book. Not much gets said about the WWF guys even though he was there for such a long spell of his career, and even less is said about the WCW.

If I thought Hogan came away from his book sounding like a nice guy, DiBiase sounds like a saint. Really surprised that Vince never put DiBiase in the hall of fame at Wrestlemania XX, he was certainly more WWF than Harley Race and for goodness sake he contributed far more to the WWF than that MORON and AWFUL worker Junk yard dog (who was DiBiase’s best man at his wedding). Actually when I think about that more… that really pisses me off.

That however also makes the book less interesting I have to admit. It seems like DiBiase doesn’t want to offend anyone at all, as I honestly can’t think of anyone he speaks badly about in the book apart from himself. It is interesting though to hear about the old regional times, much as it was in Hogan’s, but if that doesn’t interest you then it might be another reason to give the book a miss.

Looking back, it’s also a bit disappointing that DiBiase seems to miss opportunities to tell funny stories about his career like Mick Foley did. You know he has them, since on the Legends of Wrestling 2 game he tells one about Andre the Giant farting in a lift with two Japanese people in it and then following it up with the typical Andre booming laugh. There are still some funny stories in there of DiBiase’s, but not as many as you’d expect to find from a guy with his experience.

In the book DiBiase begins by covering his life before wrestling, and how he got involved in the business after the passing of his stepfather Iron Mike DiBiase, who had told him to never ever become a pro wrestler. You’ll hear how he grew up with wrestling, I personally never realised that DiBiase’s mother also wrestled, but DiBiase tells of a story when he ran down the aisle to try and help his mother when he thought she was getting beaten up for real, before his mother, blatantly just because she had to job that night, took it out on him with her moaning afterwards.

From there DiBiase talks about working around America, and having to avoid overexposure as a heel in any region, which consequently affected his first marriage. Again like I’ve mentioned already, I personally found the talk of the old regional setup interesting again, although somehow nobody gets insulted here in any way. Along the way DiBiase never really makes a comment that you go ‘haha, yeah right’ like you would with say, Hogan’s… and at no point, not even when he moves on to talk about his break in the WWF, does he come across as arrogant in the slightest. If anything, he seems humble throughout, and I personally feel that’s just because DiBiase is a really top guy.

After he talks about the WWF for a bit he then turns towards his new found belief in God and how he needed help. You hear how he was apparently not far off the Million Dollar Man character himself, and how he ended up trying to be more Christian. One story tells of Ric Flair, telling him to cheer up, convincing him to have one drink, which then lead to many and a very unhappy Christian in the morning.

I think this is around 1993 he does this, when he soon after left the WWF on good terms, simply telling Vince that he needed to be with his family and couldn’t be on the road anymore. He would come back later in the less demanding colour commentator role there, before being asked to manage as well, which I’m sure everyone remembers for whatever reason.

You might ask why DiBiase then went to the WCW… his excuse? Pretty lame really, fair enough that he ‘was feeling increasingly uneasy in the WWF, partly because of the increased road time’, but don’t ask me to explain the ‘also because I was becoming aware of what was going on with our competition, the WCW’ part. To me the WCW bit doesn’t sit so well with everything else that he said about leaving on good terms etc… but apparently he did. He left the WWF in May 1996, to make more money at the WCW when you could say the WWF really needed all the help they could get. Ah well, look what company died eh. I’d imagine DiBiase was just looking to secure a good life for his family though, and the WCW would have offered him a great deal to do less than he was doing in the WWF, so I suppose you can perhaps understand where he was coming from. I mean looking at the WWF in 1996 you could probably be forgiven for jumping what might have looked like a sinking ship.

Anyway, this is DiBiase’s book, not the Monday Night Wars, and DiBiase doesn’t really go on to talk about the WCW much, probably since he was still working there at the time (this was written in 1997 believe it or not) and there wouldn’t have been much for a born again Christian to say about such a shambolic company. They do after all always say ‘if you can’t say something nice don’t say anything at all’, although it may not have been quite as shambolic at the time, and DiBiase would probably not have been affected in his position.

Overall, the book isn’t long, and I’m sure by now you’ll be able to get it at a cheap price. If you like DiBiase and you are a big wrestling fan then you should consider getting it. There’s no harm in expanding your wrestling knowledge after all (actually that’s very, very arguable). If you are a very casual fan, which if you’re reading this then you probably won’t be… then stay the hell away from this book unless you love God. I first read the book when I was a reasonably casual fan and I came away thinking it was more like reading the bible than a wrestling book, but since then I’ve read it and honestly think it’s actually quite a good book.

I’d have to recommend DiBiase’s, he’s been around for longer than most wrestlers who have released books so you’ll learn more about wrestling. What you won’t learn is all the little bits of backstage gossip you probably expect to find these days. If you can find it cheap, give it a read.