Hello folks, HSM here with hopefully the first of many reviews. My first review is for Brock Lesnar: Here comes the pain. This video documents Brock’s WWE career to date as well as attempting to provide an insight into Brock Lesnar the person. In the past the WWE has excelled at tapes like this for stars such as Stone Cold Steve Austin and The Rock but how would a tape of man who has only been in the WWE for a couple of years fair? Well read on to find out. 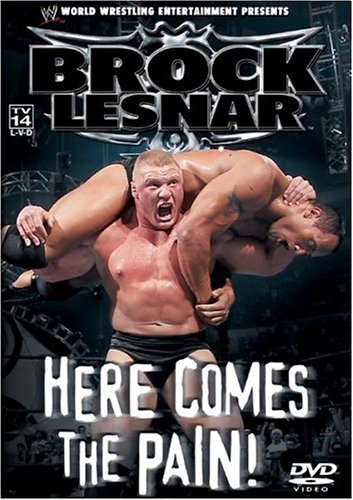 We start with the usual array of wrestlers and backstage staff talking about Brock and the immense impact that he has made in such a short time. We then cut to Brocks hometown where of all things we are treated to a visit to his old barbers where Brock gets himself a nice new haircut. We then get treated to a few shots of the Lesnar dairy farm where Brock spent his formative years. Small interview segments are shown with his parents and his best friend who reveals that Brocks nickname when he was younger was rather predictably “Broccoli”. The best bit about this segment is we are shown plenty of footage of Brock as an amateur wrestler and it shows how quickly Brock developed from an average amateur wrestler who lost just as much as he won to the powerful heavyweight who went on to win the NCAA championship.

We then jump to Brocks arrival in the WWE. Strangely from now on we hear nothing more from Brock. Mainly Paul Heyman, various Road Agents and wrestlers provide the commentary and opinions. I don’t quite understand why Brock doesn’t comment on his career in the WWE, perhaps they thought it would sound better coming mainly from Heyman, which frankly was a good idea as Heyman talks openly about his relationship with Brock. He talks about the impression Brock made in OVW, the WWE’s feeder promotion and also about the impact he made in dark matches. He states how he and Brock spent a lot of time throwing ideas back and forth and how they gelled which led to there on screen partnership.

Clips are shown of his debut on WWE television and a brief mention is given to his early feuds with the Hardy Boyz and Bubba Ray Dudley but the first thing they concentrate on in great deal is his victory in the King of The Ring tournament and the subsequent feud with RVD. Now of course after this came his WWE Championship match with The Rock at SummerSlam, which led to his first title reign. Much is made of his match with The Rock with various wrestlers saying it was a defining moment for Brock, which proved he could hang with the main eventers.

Much is then made of his following feud with The Undertaker and more specifically their Hell in the Cell match. This of course is followed by Brocks first loss to The Big Show and Heyman talks in depth about the match and the consequences regarding his betrayal of Brock. Then we are very briefly shown a clip of Brock winning the Royal Rumble followed by his feud with Kurt Angle leading up to Wrestlemania. The match is described in great detail, particularly by Angle himself and of course much is made about Brocks attempt at the shooting star press and we are treated to exclusive footage of Brock backstage right after the match itself and how concerned everyone was about him being seriously injured.

The review ends by going into brief detail about his feuds with John Cena and The Big Show which of course involved the first stretcher match in the WWE for 17 years, as Michael Hayes reminds us several times.

Overall this isn’t a bad video. It is a good review of Brocks early WWE career but videos like this always tend to confuse me. Everybody who comments on the video seems to spend half there time embracing kayfabe and the other half ignoring it which never seems to make sense to me. This aside the video is quite good. There’s some interesting footage from Brocks amateur career which otherwise people would not be privy too. Brock Lesnar fans will certainly enjoy it and even if your not that big a fan of his its still a good video. Although if you’re not a fan it may be better to borrow from a friend as opposed to buying it as at just over an hour it is a little on the short side but then that’s the problem when the guy has only been in the WWE for 5 minutes. But overall not a bad video.

Fairly decent extras, a slight incentive for you to purchase the DVD rather than the VHS.