“The night after WrestleMania XXVIII, Brock Lesnar made a shocking return to the ring and levelled John Cena with an F-5, sending a message that after eight years, the pain is back!

In 2002 and 2003, The Next Big Thing brought it to the biggest and baddest competition in WWE, becoming the youngest WWE Champion of all time and a household name virtually overnight. His awe-inspiring physique, amateur championship pedigree and affinity for punishing opponents made him an unstoppable force in the ring.

Now, after years of dominating the MMA scene, Brock is back and looking to steamroll the biggest Superstars of today. This re-release of the 2003 DVD, Here Comes the Pain, includes the original documentary that chronicles Brock’s meteoric rise to fame, as well as six hours of additional matches not included on the original DVD! Plus, hear Brock’s controversial comments upon his return to sport entertainment! 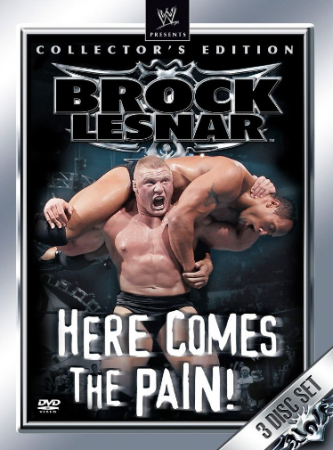 If you were told to use the Create-a-Wrestler mode on the WWE games to make the ideal WWE performer, you would create Brock Lesnar. Standing 6’3” tall and weighing close to 300lbs, he’s the size you’d expect, but with the speed, agility, power and wrestling ability he also possesses added to the mix, it’s like someone maxed out the stats to create the perfect wrestler.

With his return to WWE after WrestleMania XXVIII, it’s fitting that the company re-release their original profile DVD on “The Next Big Thing”. Unfortunately, as the majority of the content is from the original video release, the talking heads (while relevant at the time and worthy of inclusion) talk about Brock as a “long term guy”, which is funny in hindsight because that’s exactly the opposite of what happened. It’s also strange to see Kurt Angle, Tommy Dreamer and Bubba Dudley give comments simply because they haven’t been seen in WWE for so long.

The comments being from the time also give a good indicator on how accurate some of the people talking are, particularly Kurt Angle’s comments about Brock being able to fight anywhere, “including an Octagon”, and become the champion.

Another aspect of this re-release is that fans of today can get a chance to see John Cena’s great heel run as the Doctor of Thuganomics. If Cena does eventually turn heel and can capture the spirit of his persona from 2003, I genuinely believe he could go on to be the biggest heel in the business since Hogan told the fans to stick it in 1996.

The snippets from the career of Brock Lesnar are a great history lesson for those who missed him first time around and for the others, like me, who were there at the time, it’s a great trip down memory lane. Highlights include his infamous debut, the feud with The Hardyz (including one of the best straight-to-the-face chair shots you’re likely to ever see), rivalry with Undertaker and his most storied opponent; Kurt Angle.

Once the first disc is over, the second and third discs are really where this set becomes worth the money. Starting with a match from OVW against Leviathan (who later went on to become a megastar as Batista), the set also has a dark match from a RAW taping as Brock teams with Shelton Benjamin (The Minnesota Wrecking Crew) to take on Rico Constantino and Prototype (John Cena) in a bout that showcases four men who would go on to make names for themselves in WWE.

Each match has a current comment from Brock Lesnar where he speaks his mind on a variety of subjects, including why he came back, questioning what a “superstar” is and so on.  It’s a testament to the man that these short soundbites are as entertaining as the matches and it’s also a testament to him that there isn’t a bad match on the card.

Three extras on disc one cover Brock’s debut, the infamous chairshot segment with Matt & Jeff Hardy and his 2012 return.

Because the first disc is from the original release, the aspect of a 4:3 ration for the screen means there are horrible thick black borders down the sides for the majority of the footage. It is distracting, but not to the point of turning the set off again.

The first disc is pretty much OK, but from the second you put the second disc in, you won’t regret it. Full matches spanning Brock’s career, with highlights including his debut match against Jeff Hardy, versus Van Dam (both at KotR and on Raw teaming with Undertaker against Van Dam and Ric Flair), his awesome encounter against Hulk Hogan where The Hulkster did everything he could to put Lesnar over, the battle against The Rock, his wars with Angle and Undertaker and capped off with his farewell performance against Goldberg.

More talking heads from the current era would’ve been nice, but the quality of matches on the two latter discs make this a must-buy for those who lived it and for those who didn’t, but want to know what the fuss is about.

If there is a negative (apart from the lack of current-era talking heads), it’s that there is virtually no mention of his MMA career, particularly as Brock had a positive record, was a UFC Heavyweight Champion AND was easily the biggest draw in MMA history off the back of his WWE career. Not including any of that was an oversight.