This video showcases the WWF career of one the most popular and funny men in the WWF today, Mick Foley. The video is a must for any Foley fan, it comes from a series of videos about Mick Foley and out of all the 3 this is the most gripping, interesting and of course as Foley is in it, its the most funniest video. 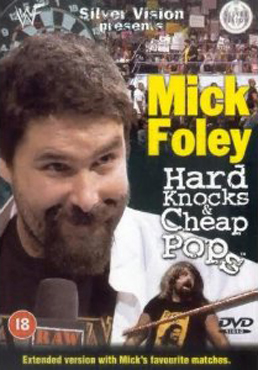 When I first bought the video I didn’t really know what to expect, I thought it would be much more serious than it is. And I thought that it might have shown the career of Mick Foley before he was in the WWF. But the video was quite a contrast to both of the things I thought it would be, it was funny, entertaining and only highlighted the career of Mick Foley in the WWF from late 1999 to when he was fired from the post as Commissioner in late 2000 early 2001.

The video covers some of the biggest Foley storyline’s from late 1999 to 2000, including MANKIND vs. AL SNOW feud, The Rock n Sock Connection and of course it covers the HHH & CACTUS JACK feud. The video has a lot of exclusive interviews with stars like HHH and Edge and Christian. As well as the other persona’s of Foley it covers the role of Commissioner that Foley played in the WWF.

This video has a lot to offer entertainment wise and it had a lot of good bits in the video. My favourite of all the segments in the Video had to be the coverage of the WWF Street fight between HHH and CACTUS JACK. Its good too hear from HHH and Mick Foley about this part of Foley career. It looks at the No Way Out PPV and it looks at the Wrestlemaina 16 main event. Mick talk’s about all these matches and has an interesting look at the Wrestlemania match and his physical condition at this time in his life.

Another really good part of this videotape is when Mick Foley talks about his role as the WWF commissioner position. This is really funny and it is probably the best part in the video entertainment wise. The ” Cheap Pops” part really comes into the video. When Foley joins up with Edge and Christian for a series of interviews and it is very funny. Foley and E & C talk about all the promos that they did. This part was very funny and the best part was the “Chicken Incident” that they did I was laughing my head off. This had to be the best part and was very funny with E & C.

I also enjoyed the Al Snow part in the video. The Foley & Al Snow part were again very amusing. Whether it was all the cheap jokes that Foley produced about Al or the trip to Las Vegas it was all very funny.

The only poor part in the video was a little segment about Steph and Foley this was funny but not the best part in the video. It was good but it was not of the standard that the other parts were in the video. I thought that this part of the video could have been left out and it would not have made a difference at all.

The only way I can think of to describe this video is to put into one sentence, so here goes, ” A great video for a Mick Foley fan, and a great watch for any other WWF fan”