By Clarkey
WWE DVD Reviews
This page contains affiliate links. At no additional cost to you, we may earn a commission if you click through and make a purchase. Learn more

Cactus, Mankind, Dude Love, and just plain old lovable Mick; there are few reasons to dislike Mrs Foley’s precious baby boy. Some great reads in the form of his autobiographies, packed to the hilt with funny anecdotes and interesting tales from the road, many would settle for this alone and take it to the bank. But then you have the actual wrestling side of Mick’s career and all the peaking moments in ring showcasing his daredevil side and talent to tell a story not only in his own words but also by expression via his art. 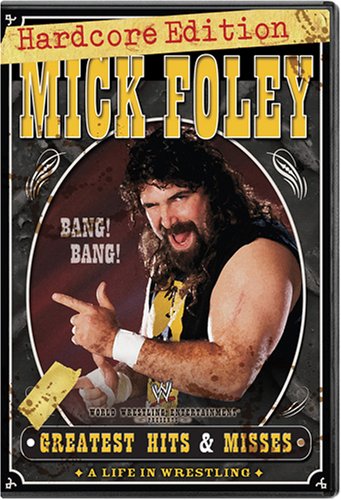 This is an updated 3-disc version of the 2-disc version released in 2004 (Mick Foley: Greatest Hits & Misses). The first 2 discs are the same and the new 3rd (Hardcore Bonus) disc includes more recent matches:

Sure throwing yourself off of Cell’s, setting yourself a light and the other hardcore frolics one can picture do not overtake pure in ring wrestling ability, but they are particularly entertaining when used in the right situation, and this is where Mick has succeeded most in his career. Mick to his credit has always seemed to place himself (bar the odd occasion) in the right situation and able to pull out the right spots, at the right time for the biggest hit. Greatest Hits and Misses essentially presents what it says on the tin, all the peak moments along the way in one nice collection for the fan to be nostalgic over, or those oblivious to Mick (you’d have had to try hard to miss the guy) to learn more about the man and be won over like so many were at those peak moments such as the Hell in the Cell with The Undertaker. The collection itself comprises of three discs, and is actually a re-release of the two-disc collection of the same title (minus the Hardcore tag) that hit the shelves in 2004. The third disc allows for matches from recent years following the original’s release to now be apart of the collection and makes the whole package all the better for this.

Akin to Ric Flair’s DVD collection, Mick introduces each match and gives his views and thoughts on each from both the build up and issues at the time, through to actual preparation for the match in question. Foley is as honest as he was in his afore mentioned autobiographies, giving thoughts that range from issues with the powers that be such as Vince McMahon through to the incident that nearly resulting in him ditching the squared circle after accidentally setting Terry Funk on fire. The collection works as a perfect companion to the biographies as the action on screen and the views expressed by Mick live out things expressed within the books. The collection paints the picture of the dedication of Foley to achieve despite not being your atypical wrestling superstar on a quick glance, and his hard work is expressed through the thoroughly entertaining matches presented on the whole. Odd matches do break the flow of affairs, and Foley is only too keen to highlight the weaker matches included and frankly pointing out how the set of matches were not hand picked, but when you take the original two discs on merit as a whole, they would happily grace any wrestling fans catalogue.

On first glance it does seem very skimpy what is offered on this third disc, and it is tough to try and warrant a purchase from anyone but an obsessive collector of shiny discs on this basis. But what is offered, although not huge is on the whole solid gold. Basically we have been given four matches to redeem this edition ‘hardcore’ with each providing a brutal encounter that all both please and excite. ‘Legend vs Legend Killer’ rears it’s head as the first of these new matches to the collection, which to all intents and purposes is the match that made Orton and he has been living off the buzz for a good while. Interestingly Mick himself raises in commentary that this is his favourite match of all time, which is very bold and probably more due to recent memory over the past than a deeply held view but the match just about justifies this approval. The second is another match involving Mick working hard to put over a younger superstar, this time plying his craft against the Rated R Superstar Edge in a Hardcore match at some small event called Wrestlemania 22. Again the commentary adds to the action offered, providing a great insight into the preparation in particular, then when coupled with what was achieved in ring again provides a fulfilling experience. Big thumbs up thus far, and only half way through with the third match springing from ECW One Night Stand 2006, pitting Foley, Edge and Lita against Tommy Dreamer, Terry Funk and Beulah. The flaming table and flaming 2×4 spots, and the build between Foley and Funk and ideology of a past ECW style match make this a worthwhile viewing or indeed a rewatch. The last match on this bonus disc is the ‘I Quit’ match from Summerslam 2006, against the legendary Ric Flair. Again Foley’s intriguing commentary livens this up even more with him revealing tidbits about his disappointment with this match, and placing the blame upon himself. It is worth a gander just to see Ric go hardcore, and Mick going against an arch nemesis in Flair.

So there we have it, and to be blunt and honest here we have a four-year-old DVD collection with a tacked on bonus disc featuring newer matches that the majority that would be interested have already seen. Those such as myself whom did not already own the original release will be thrilled with this, particularly if one has read the biographies or know more about the history as further detailed by Foley in commentary as it allows more of an insight on the man and why certain things went the way in which they did. While the collection is not steeped on the old school side of affairs, it provides more to appeal to the newer fans more familiar with Mick from his WWE stage of his career. With the bonus disc offering more from this side of affairs, it can only further appeal to these fans. Packaging the DVD with one or both of the autobiographies would have been an interesting proposal as they compliment each other so well, but if only for the high’s featured in this collection a purchase is a must if it is not already in your possession. And with Mick showing his face again to now compete in this years Royal Rumble, and talk of one last big run in some way or another, what better time to re-enlighten yourself with Foley and his highs? The Wrestling101 store is merely a click away, so give it a whirl and well, have a nice day.