WWF In Your House 18 Review

This is the first part in a new section of video reviews, this is the first Video Vault review. I am going to delve deep down into the vault of wrestling history and review some classic and historical videos. The first review is going to be WWF In Your House 18: Badd Blood, with Undertaker vs. Shawn Michaels in the first-ever Hell in a Cell match. 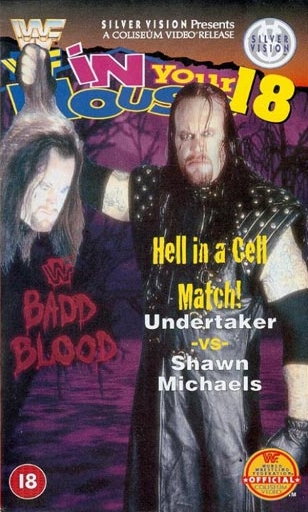 It was October 1997; WWF history would be made as the first-ever Hell in a Cell match would take place. The man from the dark side Undertaker would face Shawn Michaels. Since Summerslam ’97, Shawn Michaels had singled the Undertaker out, the two would have a fierce rivalry and with D-Generation X at the side of Shawn Michaels only a steel cell could keep the rage of the Undertaker in, and the rest of DX out.

Also on the card Bret Hart & British Bulldog would take on Patriot & Vader in a battle of the USA vs. Canada. Would the WWF Champion be able to fight for his country as well as his pride? or would the ‘All American’ Patriot be able to fly the stars and stripes of the USA? The IC title would also be on the line as Faarooq takes on Owen Hart, with the added bonus of Stone Cold Steve Austin sticking his nose in the match.

The first match on the PPV was LOD vs. The Nation, in a handicap tag match. Hawk & Animal were supposed to have a tag partner to face Kama, D-Lo & Rocky, however, they didn’t for some reason or another. This match was pretty terrible, LOD were most certainly showing signs that they were past it, and The Nation seemed to be having a bad day as well. Kama, Rocky and D’Lo were most certainly not on top form. The match came to an end when Faarooq came down to ringside and he cost LOD the victory. This was a pretty awful match to say the least, LOD were not very impressive and neither were The Nation. Thank god the Nation are not around now.

The next match on the PPV would feature Tarantula & Mosaic vs. Max Mini & Nova. This was certainly an eye-opening match, if you don’t already know these athletes are fast-paced, Mexican wrestlers who are light and small. This match was extremely fast and aerial. I have got to take my hat off to these guys, they are extremely amazing athletes and entertaining. A great entertaining match, and a much-needed change from the norm.

Sunny comes out and introduces that the next match would be the Tag Team Championship match with The Headbangers vs. The Godwins. Remember those teams? The current champs Mosh & Thrasher would defend the titles against the country boys, The Godwins. As you may expect this was pretty boring tag match. Mosh and Thrasher tried to pull of a few good moves, but the match was just so terrible, I can’t even imagine how The Godwins ever became Tag Champions, what was McMahon thinking? No matter what people say, The WWF tag team division has vastly improved today. Overall the match was dire, and so Sunny’s announcing.

A special feature occurred next, as the WWF were in St.Louis, they were having a special award ceremony for past Wrestling Legends. Some of the Legends featured Dory Funk Jr., Terry Funk, Harley Race and Lou Thez, plus many more great Pro-Wrestling Legends.

A build-up to the next match played, it featured Stone Cold Steve Austin as IC Champion, when he was made to forfeit his championship. The next match on the card would feature Owen Hart vs. Faarooq for the IC Championship. The match was not as straight forward as that, Stone Cold came down and went to the announce table. Stone Cold’s mic work with Jim Ross, Vince McMahon and Jerry Lawler were pretty funny. The match between Owen Hart and Faarooq was actually pretty good; it had basic elements of wrestling involved and some entertaining action. You could never fault Owen Hart’s wrestling, he is truly a great and he proved this in the match by making Farrooq look pretty good in the ring. With Stone Cold raising hell at ringside, Jim ‘The Anvil’ Neidhart came to the ringside and Stone Cold interfered and caused Owen Hart to win the title. Overall this match was pretty good, with classic Stone Cold at ringside.

If the tag team matches on the card hadn’t already been bad, we now were treated to an appalling 8-man tag team match, with DOA & Los Boricuas. This match was made just minuets before the PPV kicked off, The match which was scheduled was Mankind vs. Brian Pillman, but sadly Brian Pillman had tragically died earlier in the day. The match that featured on the show was boring and very repetitive, Jim Ross intelligently said it was a “Clothes line match”, and that’s all it was. I think you could easily hit the fast forward button during this match.

Up next a flag match, Bret Hart & British Bulldog would do battle with Patriot & Vader. I couldn’t believe when I saw that Bret Hart was WWF Champion in this match, I mean come on! He could have been put in a better match than this. However he was in this match and so be it. The actual match wasn’t too bad; there was a feel of emotion during the match, which helped the match become more entertaining. It was not exactly the most technical tag team match, but it was a hell of a lot better than the previous tag matches. Vader & Patriot can’t pull a decent promo to save there life, and there wrestling ability is not to good either, however Bret Hart & Bulldog pushed them to a semi decent match. Probably the most exciting part is when a fan runs into the ring and gets knocked out by the referee and Bulldog.

Now, the big one, the main event, the Hell in a Cell match. There is no denying that this match is historic. People always talk about it, and forever will. It was a gruelling and hardcore match for both men. The feud with HBK and The Undertaker had been entertaining to say the least; this match would be the climax of a great rivalry. The match started slowly but it soon became fast paced. Shawn got the advantage, then Taker, then Shawn, Taker, and so on. Both men put all their hearts into the match, it proved to pay off. Both men took great bumps, and Shawn Michaels done a quite obvious blade job, not that it really matters. Shawn went to the top of the cell and Undertaker followed him, once at top they battled with one another, until Taker gained advantage, Michaels tried to escape but ended up going off the cell through an announcing table, in a great spot. The match carried on until Kane made his long awaited WWF debut, he tombstoned his long lost brother Undertaker, and then left, with the crowd in amazement. Both Michaels and Undertaker lying on the canvas, Michaels managed to climb over Taker and pin him for the victory. Overall this match was great, full of excitement and entertainment. This is the best Hell in a Cell match I have seen, personally better than King of the Ring ’98.

A clash of quality in this PPV, most of the matches were disgracefully terrible, then the main event was great, Undertaker & Shawn Michaels really pulled it all out, and put on a great show. Sad news about Brian Pillman’s death occurred in this event, and his match with Mankind obviously never happened. The segment with the Legends of Wrestling award ceremony was good, however they could have used Bret Hart in a much better match. If this PPV did not have the main event with Taker and HBK, then I can gladly say it would be utterly terrible. It is a nice piece of WWF history to have, but a pretty awful PPV as a whole.