Two years ago the video game movie genre received perhaps its biggest and most important victory to date in its quest to be viewed as a viable Hollywood “thing.”

Sonic got a movie and it wasn’t a disaster.

I don’t know if I can stress how shocking that sentence is. I don’t mean the fact that a video game movie wasn’t a disaster because, despite the genre’s terrible track record, there have been a couple of films worth watching (Mortal Kombat, Detective Pikachu…that’s about it). It wasn’t that Sonic was a “video game movie” that had most people expecting the worst back in February of 2020. Anyone who knew the history of the character was assuming the worst because, well, they knew the history of the character.

Sonic has been more “miss” than “hit” over the past twenty or so years, if you know what I mean.

In fact, I’d go so far as to say the blue speedster—who has starred in dozens of games since the 16 Bit Wars ended—has only been in three genuinely good games since the mid-90s ended (Sonic Adventure 2, Sonic Colors, and Sonic Mania). The last time Sonic had a string of hits in a row was during the character’s peak on the SEGA Genesis, during which his first four games (Sonic 1-3, and Sonic & Knuckles) cemented him as the company’s mascot.

The first Sonic game, much like the first Sonic movie, was an unpolished gem. It was messy in spots, a bit sloppy where better games were more refined, but when it was good it was delightful. The first movie was hardly a perfect outing. Set aside the low expectations given to all “video game movies;” just judging the film on its own merits shows it to be a story that starts strong and ends on a fun note, but in between is a rather forgettable, cliched “road trip” plot that does a whole lot of nothing but fill time.

The second Sonic game tightened up the controls, expanded what worked the first time around, and added features that were missing from the first outing. There were still problems, but as early as the second game those issues felt like something that would be expected in every Sonic game. They were concessions to the design that were necessary to make a game look and feel as fast as it was.

The second Sonic movie set out to achieve for the film franchise what the second game did for the game franchise. Did it succeed? 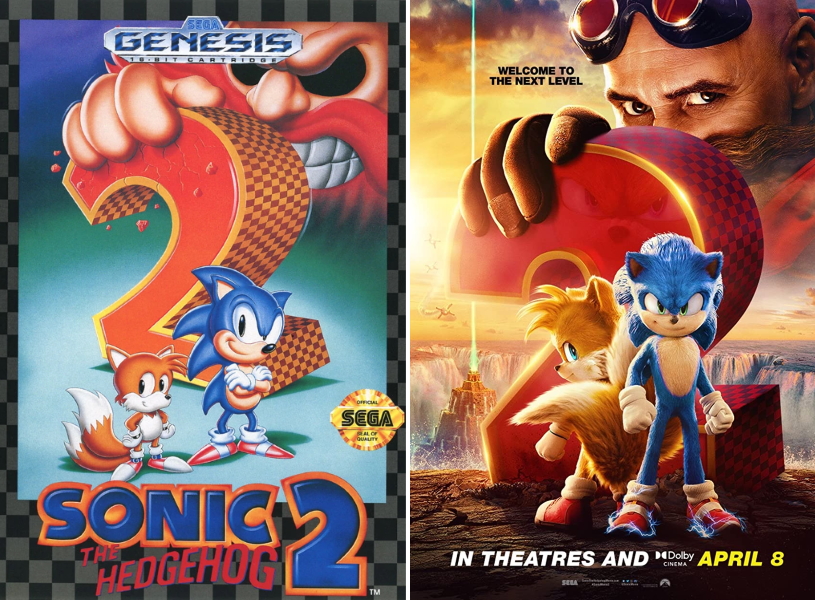 At the time, I wasn’t prepared to call the first Sonic movie the best video game film adaptation yet made, but I am ready to call Sonic 2 the best video game sequel movie ever made. Was it perfect? No, but the flaws are entirely contained within a single subplot and while I would have been perfectly happy to have the sequence (which, in the movie, was chopped up into half a dozen small, pointless, and utterly unfunny scenes) removed from the film entirely, I recognize that the principal characters in the subplot are necessary ingredients in this film franchise. As with Sonic the game, some elements just don’t quite work as well as the rest, but you accept them because it wouldn’t be Sonic without them.

But man, I did not need that wedding sequence.

The flaw in question—the fly in the ointment—involves the human characters (Tom, Maddie, Rachel, Randall — all of whom I had to google to get their names) on a wedding trip to Hawaii. Every time the story cut away to the happenings there I felt my attention slack. There were obvious attempts at keeping things lively and fun, but none of the jokes landed for me. They felt like scenes that might have worked better late in a TV season, after I’d spent several weeks getting to know the characters and the arc, etc. As it was, I’m indifferent toward Tom and Maddie and care nothing for Rachel and Randall and their turbulent relationship.

That’s it. Take that away (though, admittedly, it constitutes about a third of the movie), and this might be my favorite video game movie ever, and one of my favorite “live-action kid’s movies” ever, too. Take the wedding subplot away and everything else works exactly as intended. The Sonic humor is peak-90s “attitude.” Is it corny? Is it cringy? Is it everything Sonic was during his early 90s heyday transposed to the present era? Absolutely. And why shouldn’t it be? Why would I want to sit through a grim and gritty reimagining of Sonic? This is the lesson that the people making every Power Rangers reboot movie needs to learn. It’s okay to be silly. Embrace it. Wear it on your sleeves. Be proud that you’re corny. Movies that try to be edgy, cool, and gritty usually come off as insecure and ashamed of what they are, which is easily perceived by audiences. Movies that know they’re silly and own it deserve to be rewarded for their authenticity.

And man is Sonic 2 authentic. 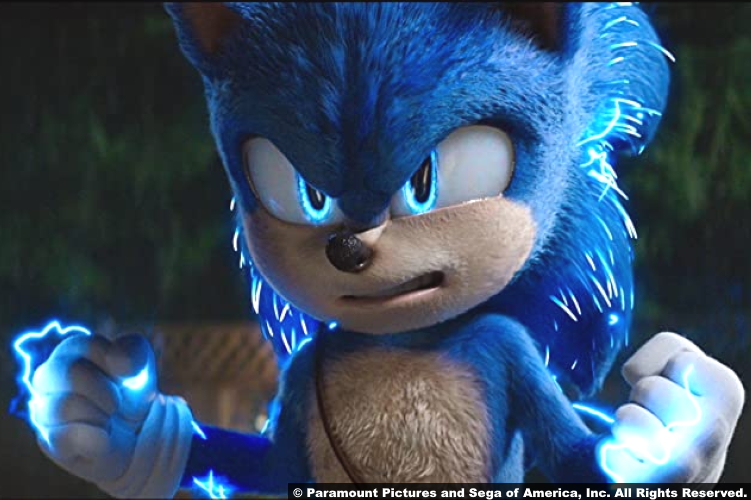 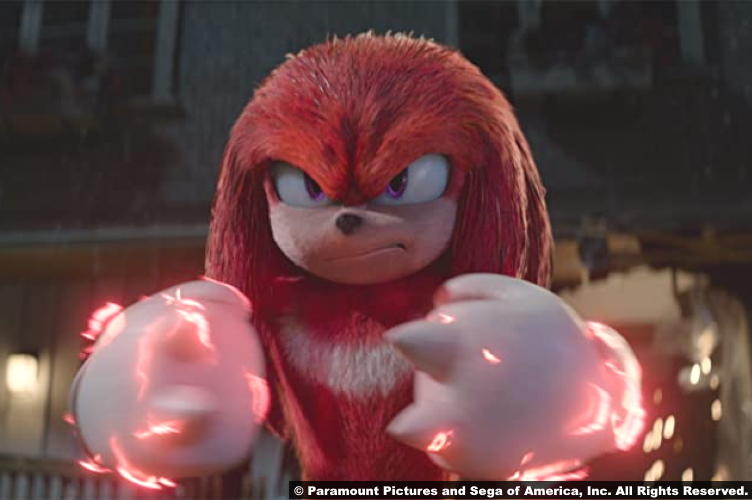 The climactic fight of the movie—which sees Sonic, Tails, and Knuckles teaming up to take on Eggman in his giant robot—put the biggest smile on my face. It was “a video game final boss fight” come to life. It was the kind of thing I didn’t think could be translated to a film medium, and yet there it was in all its glory.

As with the first film, the movie was carried by Jim Carrey’s Dr. Robotnik, who brought a spastic glee to his every scene. He owns this franchise and I can confidently say there’s not another actor who could have done what he did with this character as effectively as he portrayed the villain. These movies simply would not have worked without him, and if the rumors are true that Carrey is going to retire from acting (thus missing out on a third performance in Sonic 3), it will leave a monstrous crater in the sequel that I don’t think can be filled. 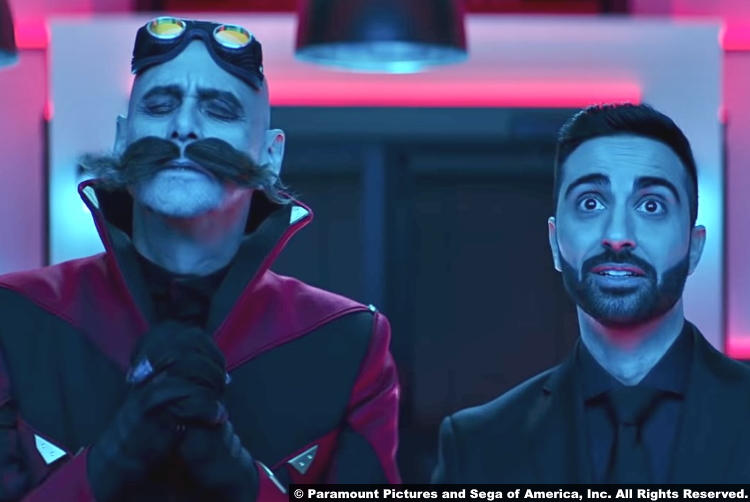 And there will be a sequel. Paramount has already announced it and given it a release date of Christmas, 2023. Release Dates these days are as unreliable as wet paper so we’ll hold our breath on that point, but at least the movie is coming. And after the output the second movie provided, I won’t be waiting for it with curiosity and mild trepidation, but with fervent excitement and an eagerness to watch these video game characters come to life once more.

9/10 – Sonic 2 is not a perfect movie, but it is possibly the best video game film yet made, and a faithful translation of the early-90s character (and friends), with all the cheesy attitude and fun that goes with it. If you enjoyed the first one, warts and all, you’re likely to love the follow-up.