REVIEW: NO TIME TO DIE is a fitting closer to the Daniel Craig era of Bond

No Time to Die is the final James Bond film that will star Daniel Craig. That’s no spoiler. The actor has been saying so for months, if not years, and famously has tried to stop playing the part twice-over only to be reeled back in with the promise of a big payday. Still, the actor’s age being what it is, and his desire to branch out into other roles, means we have finally seen the last of his work as 007.

To say Craig’s Bond has been different from past iterations would be an understatement. From the moment he was announced as the lead, a sizeable portion of the fanbase cried out against it, citing the actor’s shorter stature, blond hair, and blue eyes. It might seem snobbish and pedantic to nitpick in such a way but, to be fair, Ian Fleming’s description of the title character was basically “tall, dark, and handsome” and every version of the character before Craig was six-foot, two inches tall, with dark hair and dark eyes. Craig was barely 5’11 and did not dye his hair for the part. Fans were outraged!

Then Casino Royale came out and everyone calmed down.

Even then, the tone and style of the franchise was far different from what moviegoers had become accustomed to. There was a clear and obvious “Jason Bourne” influence in the way the film was shot, particularly the fighting sequences, and much of the more outlandish parts of the franchise were stripped away. There were no jetpacks, no laser watches, and no grand, apocalyptic stakes to contend with. What the movie had going for it was precisely what made it so different: Coming off the heels of the reviled Die Another Day (a film that seemed to revel in showing off all the more embarrassing aspects of the franchise over the years), a film like Casino Royale, that was gritty, serious, smartly acted, and overall well made was a breath of fresh air.

Unfortunately, the writer’s strike cut the legs off of the Craig years so early on, turning Quantum of Solace into a sloppily put-together, simplistically-plotted, sub-two-hour revenge flick. It was a direct continuation of the previous movie and continued the trend of shying away from embracing many of the tropes and gimmicks that had defined the series. The movie made bank at the box office, but it failed to sink into the cultural zeitgeist the way the first Craig film had done.

The series bounced back in a big way with Skyfall, however, and this was the first of the Craig-led movies to feel like a “traditional” James Bond movie. It had the big, bombastic villain. It had the globe-trotting spectacle. It had the big set pieces. And it had the epic climactic final battle. Even the theme song—Adele’s “Skyfall”—felt like a throwback to the Shirley Bassey themes. Many of the features that had come to define the Craig movies were still present, but Skyfall was the first movie to properly balance the old and the new. It wasn’t perfect, but it felt like Bond.

Spectre was more of the same, except everything was less polished. The writing wasn’t as sharp, the set pieces weren’t as interesting, the pacing wasn’t as brisk, the theme song wasn’t as memorable, and the climax wasn’t as thrilling. The film was hardly a disaster but after four movies, the Craig series had fallen into an up-and-down cycle. After Skyfall there were murmurs that Craig was done. After Spectre, the man himself said he would rather crawl over broken glass than play the part again (citing the grueling physical toll it takes). Nevertheless, he agreed to come back for one last ride and November 2019 was the date set for us to see it…until it got bumped to February 2020…and then again to April 2020…then November 2020, then April 2021, then finally, mercifully, to October 2021.

Unless you’re in Australia, in which case, see you next month (maybe). 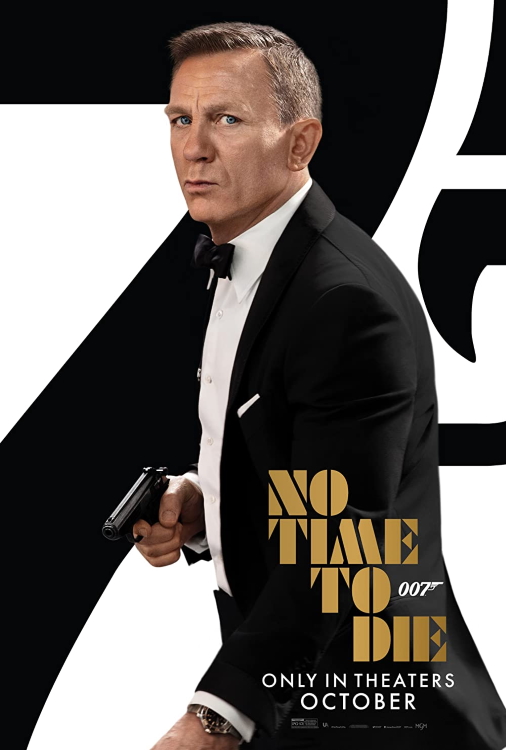 I’ve watched every Bond movie ever made multiple times. In my opinion, the quality swings wildly depending not only on how each performer approaches the character, but how the producers decide to present the character as well. Curiously, Craig’s Bond is the one with the most varied senses and sensibilities: Connery’s Bond is pretty engrained from his first to his last movie. Moore’s Bond ages the most from beginning to end, but the template is basically the same in all his movies. Brosnan has one of the best entries, one of the worst entries, and two that just miss the mark, but the same basic formula is followed in all four films.

Craig’s Bond starts with a heavy Bourne Identity influence and a seeming aversion to rely on the franchise’s tropes, but here at the end of his run of films, No Time to Die is basically its own spin on the classic formula. It feels the most like a Bond movie since Brosnan was the lead. That’s not a knock on Craig (Casino Royale is a top three Bond film, in my opinion), but rather an acknowledgment that the producers/creators wanted this one to feel like a throwback sort of Bond movie, even while keeping a lot of the new additions that have come since Craig took over.

So with this being the “absolutely, for sure” final Daniel Craig entry, and with Craig’s movies all sharing in common a willingness to branch out and present James Bond differently from films of the past, the question going into the movie would be: How would the film acknowledge itself as the final installment by this actor who has played the role for the past fifteen years? 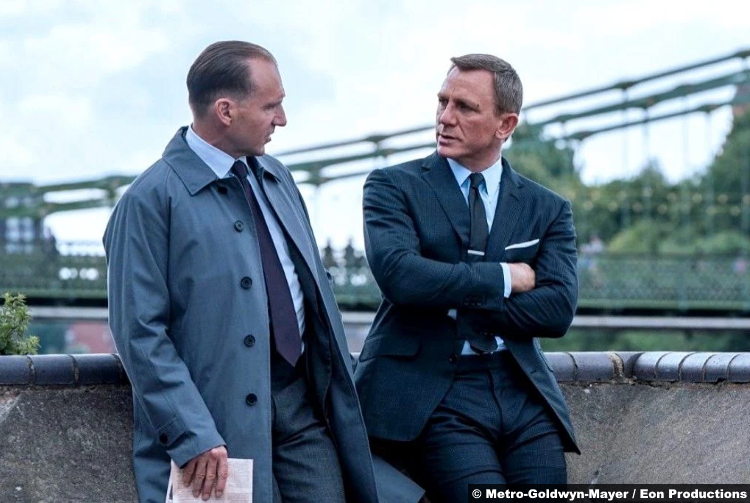 This movie said goodbye to Daniel Craig’s James Bond by killing him.

The franchise basically invented the “soft reboot” for a film series, using the new actor to refresh things, update the world around the title character, and put a new spin on the series. Connery’s movies were 60’s-esque spy films with a sprinkling of sci-fi. Moore took the franchise to the campier side, only for Dalton to bring the series to its darkest and grittiest. Brosnan presented the first post-Cold War Bond, and Craig was Bond for the digital age. Every one has been different, but the one constant has been Bond living to fight another day. He was never so tied down that his many retirements or forced leaves of absence would ever stick. He wined and dined a new woman almost every film, never committed too determinedly to any one fling, and always was ready to jump into the fray when the moment came.

So here, with this being, not just the final Craig film in the series but, with that, the final in this new take on James Bond, it’s fitting that writer/director Cory Fukunaga would decide to take a different approach to ending this run of films in the ongoing series. How many times has Bond “retired” only to be pulled back in, either by the villain or Mi6 or both? It would have happened again, and the revelation that he had a daughter would only have complicated and added too much baggage to the franchise. There was no other endgame. Either James was going to live to fight another day or he was going to die. The former is the way all previous movies ended. This one chose to close the book and ensure a “hard” reset the next time around. 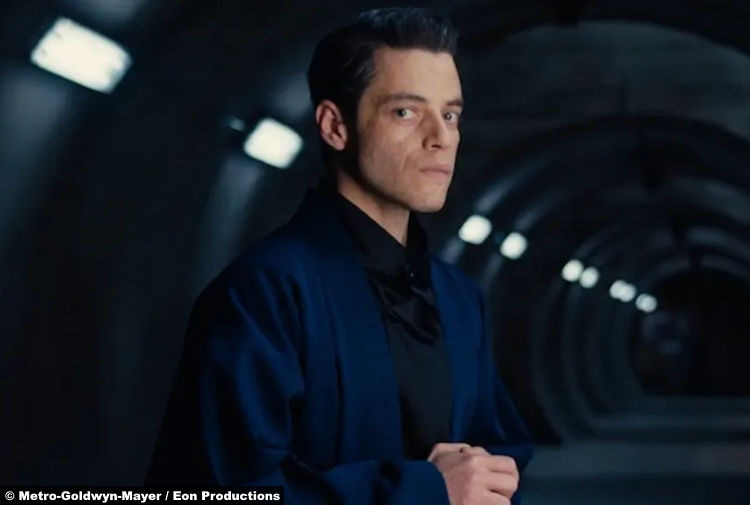 No Time To Die ends Craig’s run of films with an imperfect, but overall well-made movie. It’s the longest of the films and the pacing drags a bit in the second half, but there’s a lot going on and no plot or sub-plot feels needless. The movie’s biggest flaw rests with its villain, who is wonderfully and chillingly acted by Rami Malek, but whose motivation is sorely lacking from a story standpoint. The ultimate goal of the villain is vague at best and purposeless at worst. He’s also foiled fairly easily. There’s an odd disparity between the level of danger the bad guy’s grand scheme poses to literally all of humanity and how easily those plans are undone. Granted, the movie makes up for that a little by letting there be a price paid to win the day, but the actual winning doesn’t take a lot to pull off.

Other than that, in terms of it being an “event movie,” that gives wary would-be ticket-buyers a reason to go to the cinemas, No Time to Die brings the heat and packs a punch. Many movie houses had to close indefinitely when this film was delayed (again and again) during the pandemic in 2020. Hopefully this will be the movie that brings about the reopening of cinemas everywhere.

It’s worth it to see James Bond return and to see Daniel Craig bid adieu, on the big screen.

9/10 – No Time to Die does an excellent job sending Daniel Craig out with a win. There are flaws to be found, but they do not detract from the overall “experience” of watching cinema’s greatest secret agent do his thing. 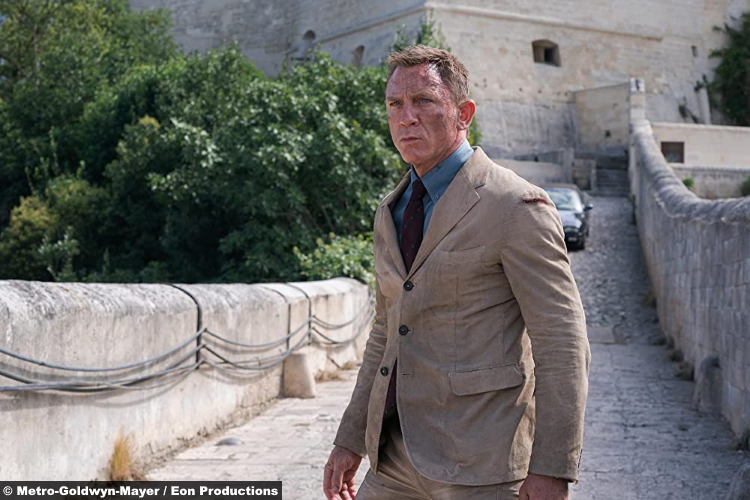