Your SO OF COURSE preview of WWE MONEY IN THE BANK 2020!

After the dust settled and with a month of hindsight to think about it, I would rate WrestleMania 36 as a 7/10 show and probably rate it in the middle of the pack as far as Manias go. Had there been a live audience and had a lot of the filler matches been cut, there was easily a top 5 show to be found. As it was, the show just wilted under the pressure of putting on a big event under the restrictions of the present environment.

It’s usually here where I say something snarky like “good thing we’re still in the exact same environment!” but I won’t. The reason is because, while the next show on the docket will be just as handicapped as Mania was without a crowd, it will also be a tighter card, and will replicate the best thing about Mania this year. The two gimmick matches almost single (double?)-handedly made Mania worth watching. This month we’re getting another crazy gimmick match, so I hope you join me in wondering about all the ways Vince can squander the goodwill of the Firefly Funhouse and Boneyard Match. THIS is your SO OF COURSE preview of WWE MONEY IN THE POCKETS OF FLORIDA POLITICIANS WHO DECLARED THIS CARNY UNDERWEAR THEATER AN ESSENTIAL BUSINESS 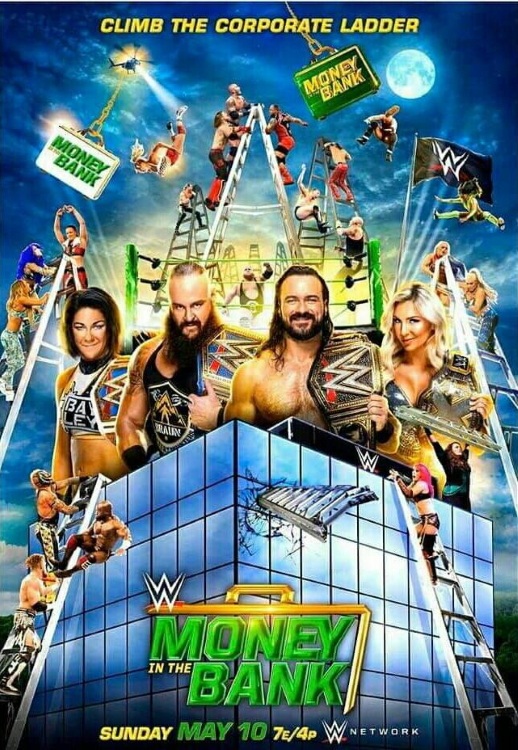 As said, there is one big gimmick match to look forward to this year, but first…the undercard.

What it is: It’s four tag teams all thrown together when probably we could have just done New Day vs Miz/Morrison and let the other two teams have a one-off on the pre-show.

Entertainment value: 8/10. Oh it’s gonna rock. Almost everyone involved here has either talent, balls, or veteran’s level experience in ladder matches. A couple have “all of the above.” The match is going to be tons of car crash fun and will make you forget we didn’t get the proper tag team ladder match at Wres—

Who should win: Well there aren’t many options are there? The Forgotten Sons look like someone’s CAW team they made on a boring Saturday morning. Lucha House Party is the exact kind of team that never wins these sorts of matches. Miz/Morrison just lost the title a couple of months ago. Considering how flat every title change has been without a crowd, my inclination to limit those as much as possible till live audiences return. In that case, by default, I think New Day should retain.

What it is: I don’t know but I know enough to look away until it’s over.

Entertainment value: Tamina/10. That’s a score lower than zero but that should go without saying. I really worry that this match will expose how much Bayley needs either a talented opponent or at least someone with some charisma to play off in order to have a good match. Tamina is the blackhole opposite of those two things.

Who should win: I can’t even make a joke about putting a title on Tamina in 2020. You might as well bring back The Great Khali to take the WWE Title off Drew.

What it is: It is, notably, not Braun vs Fiend.

Entertainment value: 3/10. Let’s be real here, neither one of these guys are great in-ring workers. Bray is great at storytelling but Braun is just dead weight.

Who should win: Unless they want Braun to drop his newly won title to the, BY DEFINITION, weaker of Bray/Fiend’s two personas—and I can’t imagine why they would want to throw such a bucket of water on Braun like that, but then again this is WWE—you have to think Braun is going to retain here, continuing the feud and building up to the moment when the Fiend strikes again and reclaims the gold.

What it is: It’s a match that on paper should be rad but will probably be gimmicked-up so much it just becomes a big blob of “sports entertainment.”

Entertainment value: 8/10. That score is what the match could be under the circumstances. As I say, I think the “story” of the feud will overshadow the work their two would normally put in together, so instead of a fifteen-minute scorcher, we’ll probably end up with a twenty-minute “story” (run-ins, stalling, some kind of fiasco of a finish, etc).

Who should win: Drew. Even though my default position every PPV is “Seth needs the win,” in this case there is zero reason to take the title off Drew. Without a live crowd to gauge how the audience is responding to him, it would be grossly unfair to throw away his reign in the middle of the pandemic. Put it this way: the least important member of 3MB had a five-month reign with a crowd firmly whatever the opposite of “behind him” is. At least give Drew a single month with a crowd to see if they really have something with him on top.

THE MONEY IN THE BANK “DONKEY KONG” MATCHES

What they be: I’m not sure how it’s going to work, but WWE has said that both Money in the Bank ladder matches will take place “at the same time.” I don’t think that means they’ll start at the same time, only that one will start and then later, the other will start with the first still ongoing. I could be wrong.

Entertainment value: 10/10. I trust they have a plan. Here is the official preview of the match:

The match begins on the ground floor of WWE Headquarters, but the briefcases – containing contracts for a championship match anytime, anyplace – will be hanging all the way up on the roof of the corporate tower.

How can you not be all-in on something as ridiculous as that?

I only wish I could have a time machine, go back to 1999 and pitch an idea like this to Vince as a showpiece for Austin. Imagine a PPV main event with Austin having to climb Titan Tower, fighting different members of the Corporate-Ministry, etc, before facing The Rock or someone on the top. Tell me you wouldn’t pay $60 just to see the insanity that would occur?

I can only hope these matches live up to the wild, looney tunes mayhem that’s in my head as I think about it.

Who should win: In the past, WWE has flipped and flopped between two kinds of MITB winners. First, there are the main-event guys that they have a story for. Here you have your Randy Ortons, your John Cenas, your Edges. On the other hand, there are those surprise winners that grab the case because the “creative” team thinks “maybe they can blossom into something.” Here you have your Daniel Bryans, your CM Punks, your…sigh, your Damien Sandows. So what makes sense this year? If you want a vet, Daniel Bryan is your man. If you want to push the next big star, there’s Aleister Black. On the other hand, Black winning seems too obvious. Too easy. If you ask me, I’d give it to Otis. Have him hold it and don’t cash in until there’s a crowd ready to go nuts for it (like the Raw after Mania).

As for the other match, the safest pick is between Asuka and Shayna Baszler, but both have been in the title scene so recently and lost that I can’t see that generating much excitement. Unfortunately, pickings are slim once you move past those two. In that case, the safest bet is the correct one: Flip a coin, and let’s say…Shayna.