On May 17th, NJPW kicked off their 24th Annual Best Of The Super Juniors in the world famous Korakuen Hall, Tokyo. The two nights in this venue would see the last two BOSJ matches for the three-time winner, Jushin Thunder Liger in this building. Both of which he’d lose in honorable style. If that’s even possible. It’s hard to see the age and mileage of a man who lives his life behind a body suit and under a mask, but it’s appropriate to say that Jushin Thunder Liger has tuned up the old band for the paying audience for one last run at BOSJ and for good reason too.

NJPW: Looking To The Future

At Wrestle-Kingdom 11, New Japan made a statement of intent by not only showcasing some of the world’s greatest wrestling matches but by also aiming the proverbial gun towards North America – maybe that’s what Kenny’s been shooting at this whole time. Liger’s position in this BOSJ is working much like a transition of power similar to that of what The Undertaker went through at this past year’s WrestleMania. It’s a changing of the guard, and the new recruits of the last few years are coming from all over the world. Names like Will Ospreay and Marty Scurll from the UK. Ricochet from the States and a host of CMLL guys. These are just the juniors, the rest of the roster seems to diversify the pack above and beyond. Yet to compete, they still need more. 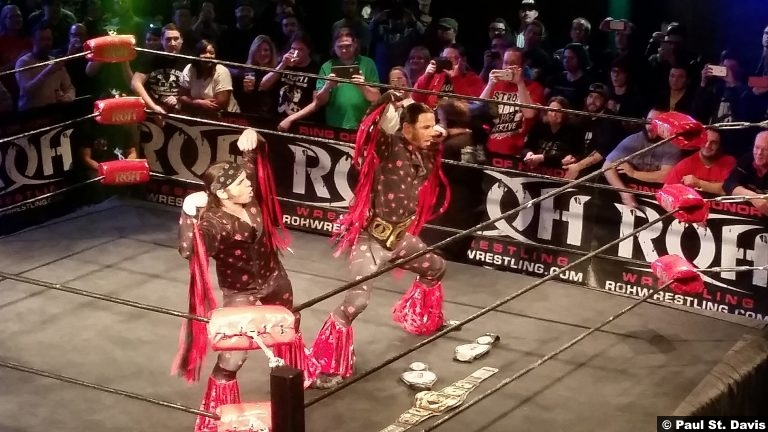 The Young Bucks are proving themselves to be a marketing machine and straight up smart businessmen.

They’re able to do this, and with global exposure, by strategically and cleverly correlating themselves with companies snowballing with hype like Ring Of Honor, Revolution Pro Wrestling, and the historic CMLL. They’re working hand in hand to present a global Professional Wrestling product that works more like a sports governing body, like football teams under the umbrella of the Premier League, more so than a globalized company controlling every nuance or production with limited freedom. New Japan owner, Takaaki Kidani, spoke on May 18th (2017) of his global expansion plans for their streaming service, an invasion of the United States (which includes an IWGP US Title), as well as making NJPW World available on Chromecast and Amazon Fire TV. The later news comes with a great sigh of relief to many. Smart nonetheless, having wrestling of any kind popping up as suggested apps on any streaming platform can only prove to turn more heads.

It seems New Japan are making the right steps and carefully doing all the right things. But as mentioned in the address by Kidani, it seems to have come to light that more care needs to be taken with their talent following the (potentially) life threatening injuries to Shibata and Honma. Whether this means softening up their legendary ‘Strong Style’ or simply having more control over move sets, that remains to be seen. But the duty of care needs to be implemented for the sake of the ever growing worry of WWE snapping up talent left, right and centre to add to their ever saturating roster of unutilized talent. It seems Kidani may have to spend some money here in order to make it. Whilst doing this he needs to continue in the same vein of dropping himself into the right markets and pushing the New Japan style and talent appropriately so that it becomes difficult for outsiders to snap them up. What he could also use is a few more minds like The Young Bucks and Kenny Omega, guys that tend to be social media and marketing geniuses.

Week 1: Best Of The Super Juniors

Moving on to the week’s New Japan action from the Best Of The Super Juniors, a round robin tournament that is a prime example of what New Japan is all about. Those unfamiliar with the concept, the Best Of The Super Juniors showcases an array of Junior Heavyweight competitors that are split up into 2 blocks (A and B). Each participant will face each other in their respective blocks until a winner of each block is decided. From there we are presented with our Best Of The Super Juniors Final, whereby the winners name will be scratched into the books with many historic names, as well as being offered an IWGP Junior Heavyweight Title match at the following Dominion show (unless the current title holder wins, thereby he may choose his opponent at Dominion).

Week 1 has thrown a few surprises our way. Most notably the current losing streak of KUSHIDA, who has yet to pick up a victory in the tournament but with potential reason that many are assuming, is all a part of the redemption story set to go into full swing come Week 2 of the tournament. The story began when KUSHIDA lost his IWGP Junior Heavyweight Title at Wrestle-Kingdom 11 to current holder, Hiromu Takahashi. It was only perpetuated at Sakura-Genesis where KUSHIDA lost in 1m56s when trying to recapture his gold. All’s going according to plan, but it’s anyone’s guess how they present this turn of fortune so suddenly in KUSHIDA if that even is the plan at all. Maybe some bread from the basket of Kojima or a re-run of Back To The Future would do it? 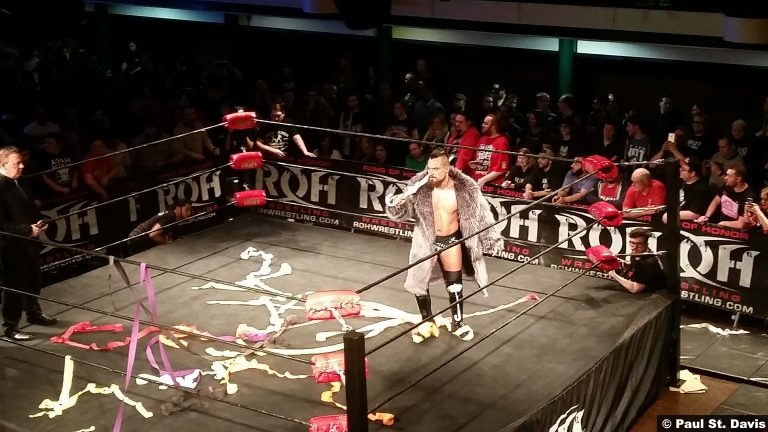 Marty Scurll – The Villain is starting to cause a ‘Spot of Bother’ in the Wrestling World.

Elsewhere, we were treated to two wonderful Will Ospreay matches. From Night 1 we saw him take on his homeland rival Marty Scurll, which worked perfectly in the favor of the debuting Villain. Not only causing a ‘Spot Of Bother’ to the plan of Will Ospreay by beating him with a ‘CHICKEN WING’, Scurll also seemed well favored in the eyes of the New Japan fans. My observation of Scurll seems to be that his character oozes a sense of post-irony, that is also adopted by fellow Bullet Club members Kenny Omega and The Young Bucks, whereby facial expression are purposely exaggerated, as well to is the selling and the taunting. Scurll is everything the Japanese like in a character, so full marks to him and his New Japan debut.

From Night 2, we were feasted with a return to the controversial pairing of Will Ospreay and Ricochet to the BOSJ. This year, and I think this is a fair point to make, we witnessed a match more matured to the year prior. Though spots were indeed risky and spectacular for the sake of spectacle, there’s no doubt that contextually you have to look at this matchup from a different psychological standpoint, and therein lies the point they made with this match. It’s really a case of where in the chaos of charismatic catastrophe can I catch this other guy out. Is it in the air? On the apron? Over the top rope? On the mat? It’s two guys of unparalleled talent, that sit on a level playing field, bouncing around the ring looking for the right opportunity and scenario to strike the killer blow, as though it was a video game come to life.

Perhaps the oddest match you’ll see this year came between two Suzuki Gun members facing off against each other, FOR NINE MINUTES, without touching each other until Tachi eventually rolled up Taka Michinoku for the crafty victory. Professional Wrestling may have been the loser in this particular contest but for what it was worth, it was mildly entertaining, and I suppose that’s all you can ask for in a match between these two.

A man that seems to have the number of the Ticking Time Bomb is the luchador, Dragon Lee. Lee has turned over 2 of the 4 front runners of his group thus far (though that can prove to mean very little with New Japan) but logic would have it that this group could be decided when Ricochet and Dragon Lee meet. Nonetheless, Lee has turned out an amazing performance with both Hiromu and Scurll.

Volador Jr is blowing hot and cold in group B whilst BUSHI is, in the nicest possible way, being BUSHI. His match with El Desperado was well worked and integrated a strange dichotomy but I have been unimpressed with BUSHI so far. Taguchi, as he tends to do in BOSJ, turns up the volume and proves he is one hell of a player in Japanese Professional Wrestling. Seriously, Taguchi shouldn’t be as good as he is, but when he goes, he can go and his match with Volador Jr proved just that by implementing a tongue in cheek persona with a business is business stance to the undertone of the match. A few names like ACH, Tiger Mask, Kanemaru and El Desperado just tend to be floating but nevertheless not forgotten. It has to be said about everyone in this tournament, they are all putting in one hell of a shift and the best is yet to come.

The first weeks front runners for the tournament seems to be Dragon Lee, Taguchi, Marty Scurll, Will Ospreay, and Ricochet. It’s still early doors so anything can and will happen from here on out and Week 2 will prove to cement a more likely winner as things start to take shape regarding KUSHIDA and whether or not Liger will win a match at all. The important factor this tournament always has to keep in mind though is its creation of stars that prove worthy in transcendence and yet also keep within them the heart of New Japan Pro Wrestling.