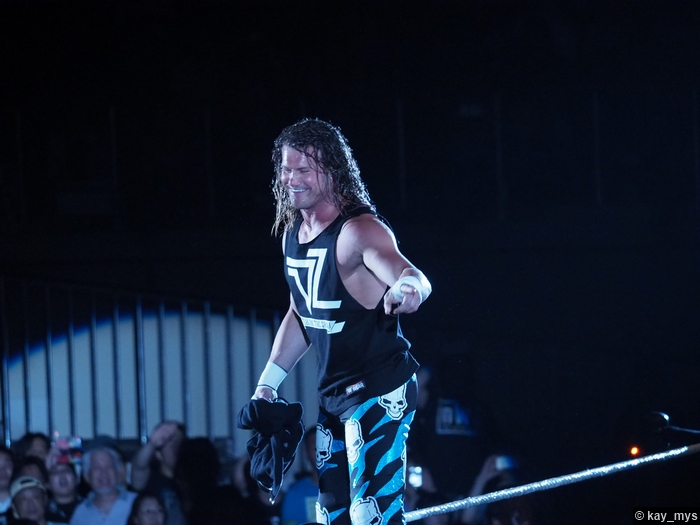 Before SmackDown Live officially gets underway, a meeting between Randy Orton, SmackDown Commissioner Shane McMahon, and SmackDown General Manager Daniel Bryan is interrupted by the self-proclaimed “hottest free agent in sports entertainment” Heath Slater, who brings SmackDown management a large fruit basket. Heath states that he went toe-to-toe with Brock Lesnar on RAW and he is there to give them another chance to offer him a SmackDown Live contract. However, Shane and Daniel agree that they are through giving Heath Slater opportunities, but Heath continues to insist on getting a contract and this leads to Randy Orton telling Shane and Daniel that he has an “idea”.

SmackDown Live then officially gets underway with Intercontinental Champion The Miz and his wife Maryse in the ring for Miz TV. Before The Miz can even introduce his first of two guests, WWE World Champion Dean Ambrose jumps the gun, deciding that he wasn’t waiting for an introduction. However, the champion barely gets to speak before he is interrupted by his SummerSlam opponent and the #1 Contender for the WWE World Championship, Dolph Ziggler, who makes his way to the ring. Ambrose and Dolph then go face-to-face, ready for a fight, but The Miz intervenes, saying that they are there to talk, not to fight. The Intercontinental Champion says that, over the years, Dolph “fizzled out”, but now Ziggler is a part of a “career resurgence” before questioning what will happen if he fails to win the WWE World Title at SummerSlam.

The #1 Contender says that he isn’t thinking about after SummerSlam, he’s only worried about SummerSlam and the WWE World Championship. Ambrose then says that a lot of people are saying that Dolph has turned a new corner, but he’s not buying it. The Miz then tries to speak, but Dolph tells him to shut his mouth before Ziggler asks Ambrose what he wants him to admit, saying that Ambrose has been right about him. Ziggler then says that, after SummerSlam, Ambrose will have to admit that he was the final push that put him over the edge and led to him becoming the new WWE World Champion.

The champion says that it doesn’t get any easier once you’re the champion and the day that you become the WWE World Champion is the day that the “pressure” really gets turned up. Ambrose then says that Dolph is happy being the star of some “crappy movie” before saying that the “chip” on Ziggler’s shoulder is going to weigh him down and “bury” him. Ambrose continues, saying that Dolph is going to get “embarrassed” at SummerSlam, but Ziggler is going to prove to him and everyone else that Ziggler doesn’t “want it bad enough” and he is “never going to get it”!

Dolph argues that Ambrose doesn’t know anything about him but the champion knows that he is going to find out that he doesn’t have what it takes to beat him. Dolph then says that, when Ambrose is pulling out his hair and digging down deep, looking for one last move, but before Dolph finishes his sentence, Ziggler blasts Ambrose in the face with a super kick! Dolph then concludes by saying that Ambrose will find out at SummerSlam that he is just “that damn good”.

With a psychedelic new entrance, Naomi was ready for action on SmackDown Live against the debuting Eva Marie. However, for the third week in a row, Eva Marie would have a convenient excuse to not make her debut as, this time, “All Red Everything” would cite traffic problems and would not be able to compete as a result.

Just one night after a beatdown from “The Beast” Brock Lesnar on RAW, free agent Heath Slater would again put his career on the line to try and earn a SmackDown Live contract as, this time, Slater would go one-on-one with Brock Lesnar’s SummerSlam opponent Randy Orton! Looking to send a message to Brock Lesnar before SummerSlam, Randy Orton would relentlessly beat Heath Slater in the corner to the point of the referee disqualifying “The Viper”. However, this would only serve to infuriate Randy Orton as Orton would bring Heath Slater outside the ring, tossing Slater over the announce table. “The Viper” then positions Heath on the barricade before spiking Slater with a suspended DDT on the arena floor! Orton then brings Slater back into the ring and, while it looks like Orton is going to hit Heath with the RKO, “The Viper” decides to send a message to Brock Lesnar by drilling Heath with back-to-back German suplexes before planting Slater with the RKO!

Backstage, SmackDown Commissioner Shane McMahon and SmackDown General Manager Mick Foley confront a delusional and hurting Heath Slater in the trainer’s room. Shane and Daniel would initially offer Heath a SmackDown Live contract after congratulating Slater on his disqualification win over Randy Orton, but when Heath mistakes Shane for his sister Stephanie, Shane changes his mind, walking off with the contract, leaving Slater confused.

Before he puts the WWE World Championship on the line against Dolph Ziggler this Sunday at SummerSlam, the WWE World Champion was in action on SmackDown Live as Dean Ambrose would go one-on-one with The Wyatt Family’s Erick Rowan, with Bray Wyatt in his corner, in a non-title match. In the end, it was Dean Ambrose overcoming his larger opponent, spiking Erick Rowan with Dirty Deeds and pinning Rowan for the win. After the match, Dean Ambrose would walk to the back as Bray Wyatt remains seated in his rocking chair with his back to the ring, holding Erick Rowan’s sheep mask before throwing the sheep mask in the chair and walking to the back, clearly suggesting dissention in The Wyatt Family.

In women’s tag team action, “The Irish Lass Kicker” Becky Lynch would team with Carmella to face the team of Alexa Bliss and Natalya. During the match, Becky Lynch and Natalya would take each other down in the ring and, similarly to last week, this is when Eva Marie would decide to come out to the stage. However, as Eva Marie slowly makes her way towards the ring, she is surprised by the emergence of her scheduled opponent from earlier in the night, Naomi! Naomi would chase Eva Marie around the ring before Eva would run through the ring, narrowly escaping from Naomi as Natalya would catch Naomi, tossing her out of the ring. Natalya then tries to surprise Becky with a roll-up, but Becky would counter into the Dis-Arm-Her, making Natalya tap out to pick up the win for herself and Carmella.

Backstage, Kalisto was a victim of another beatdown at the hands of Baron Corbin as, this time, “The Lone Wolf” is crushing the face of Kalisto against a garage door, telling the high flyer that, every time Kalisto gets back up, he is going to beat him back down. Corbin then says that he does whatever he wants, whenever he wants before exiting as Kalisto receives medical attention.

Then it was time for the main event as, five nights before he faces AJ Styles at SummerSlam, fifteen-time former World Champion John Cena would go one-on-one with a familiar rival in Alberto Del Rio with AJ Styles a guest on commentary. Throughout the match, John Cena would endure everything that Alberto Del Rio had to offer, even powering out of the cross armbreaker before hitting the Attitude Adjustment, pinning Del Rio for the win. After the match, AJ Styles would strike an unsuspecting John Cena with the Phenomenal Forearm. Styles then grabs a microphone, telling Cena that, after he beats Cena this Sunday at SummerSlam, he will be the “face that runs the place”, concluding by telling Cena that Cena’s “time is up” and his “time is now”.

AJ then starts to leave the ring, but decides to come back with the intent of doing more harm to Cena, but this is when Cena springs up and delivers the Attitude Adjustment to “The Phenomenal One”. Not satisfied with that, Cena would drag AJ to the outside, bouncing AJ’s face off of the steel steps before exposing the announce table. Cena then brings AJ to the top of the steel steps before sending Styles crashing through the announce table with the Attitude Adjustment! Cena then stands tall in the ring as his SummerSlam opponent lies amongst the broken pieces of the announce table.

What did you think of the last SmackDown Live before SummerSlam? Post your comments in the box below.