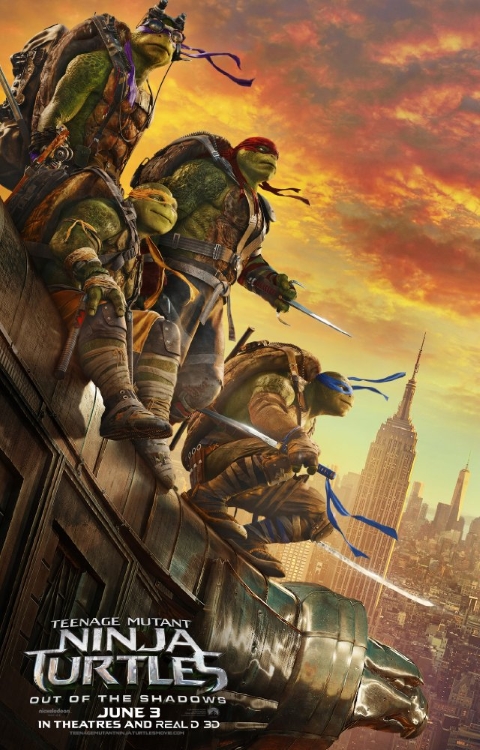 Full disclosure: I hated the first movie. Not the “Teenage Mutant Ninja Turtles” that came out in 1990. I adore that movie, warts and all. And though its sequel (The Secret of the Ooze) is even dumber, it is also a delight to indulge, Vanilla Ice and all. The third one—the one where they went back to Japan and pretended to be Samurais—not so much. But those first two movies were great for 6-8 year old me. As was the cartoon show. It ran for ten years from 1987-1996. From the time I was three years old to the time I was in sixth grade, Ninja Turtles was my jam.

But the magic kind of died after that. The brand never really found its next step to stay relevant for the next generation of kids. The movies had fizzled out, and though there’s a charming quality to the Jim Henson-designed puppet/suits worn in the original live-action films, they were very limited in what they allowed the actors to do. And of course, there was no other way to bring seven foot turtle-people to life in the 1990’s. A live action show on FOX came and went with little fanfare. An animated reboot debuted in 2003 and lasted for six years but it never became a must-see program for kids. They tried bringing them back to theaters with an animated movie (“TMNT” which released in 2007) and though it wasn’t bad at all, it failed to spark enough enthusiasm to generate a sequel.

The biggest problem was likely the fact that the brand was popular with millennials, and in 2007 millennials were around the age of 20-25. That’s not really an age when you typically indulge in childhood nostalgia. That usually comes a few years later. In 2012 Nickelodeon relaunched an animated series and this time the brand found new life. What was different between 2007 and 2012? Probably the fact that millennials had kids old enough to enjoy it the way they did when they were kids. At least that’s true of me. I caught the TMNT movie on home video but after it was over I never gave it a second thought. Now that I have kids in elementary school, watching Teenage Mutant Ninja Turtles is an experience I share with my kids every time it’s on. It’s not just a way to reconnect with my youth; it’s a way to connect with my kids through something I enjoyed at their age.

The time to cash-in on the franchise (and on He-Man, by the way) is now.

That said, I repeat myself: I did not like the first (2014) movie. I didn’t like the design of the turtles (with their human lips and teeth and noses and nostrils). I wanted the classic faces from my childhood brought to life. I wasn’t the only one, as some took to the internet to complain (shock of all shocks) and posted photoshop mockups of what the turtles “should” have looked like. I didn’t like the rumored origin story, which is that they were going to be aliens. I didn’t like that Shredder was originally going to be an American played by William Fitchner and that his origin story and connection to Splinter was to be removed. In addition it was to be April, not Splinter, to give the turtles their Renaissance-era names (and her family was to be involved in their mutation in the first place, making the turtles April’s pets).

It was a series of little changes that seemed to exist only so that someone could “put their own mark on the franchise” or “update” it for a “new” generation. That’s a bunch of hollywood buzzwords and change for the sake of change. I didn’t want change. I wanted my Ninja Turtles, darn it.

After the internet went bananas, a lot was altered. The alien origin story was scrapped (and denied) and the movie was severely edited and some reshoots were done to change the origin of Shredder back to it’s traditional story (which kind of gutted Fitchner’s character in the process). April’s connection to them and their weird human-like faces still remained, but after two years I guess you get used to things like that.

My biggest problem with movie one was how unfun it was. It had a few light-hearted moments, but they were overwhelmed by too much brooding and seriousness. When you take away the constant dumb-fun in a movie like this, it becomes hard—as an adult—to enjoy it. Also the many script rewrites really made it the plot a bit of a mess.

Of course it made enough of a splash right off the bat that a sequel was greenlit during opening weekend and fastracked for a 2016 release. My hopes weren’t high, but as the release approached I started to feel a little twinge of nostalgia. It seemed like, this time, the creators intended to actually give the fans what they wanted. How novel! It’s only worked like gangbusters on everything from Captain America to The Jungle Book. Just take the source material and translate it to the screen, even if what you’re translating is big, colorful and dumb. Just do it and people will pay to see it, because it’s childhood memories brought to life.

This movie was childhood memories brought to life. 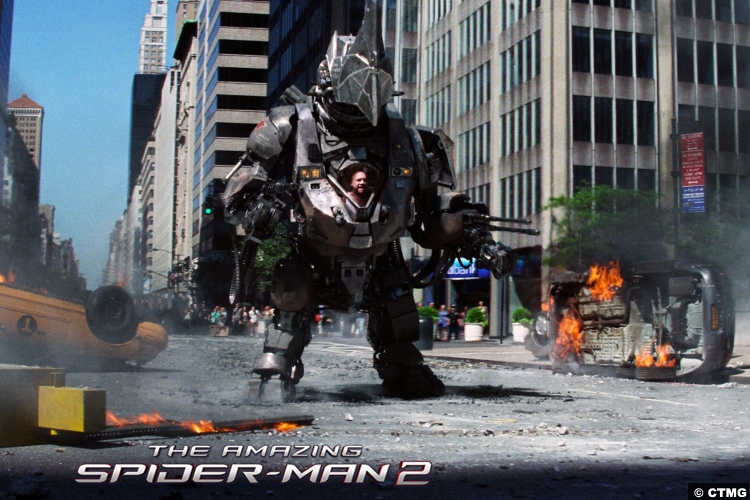 Would you even know that was supposed to be “The Rhino” if I hadn’t told you?

If you’re gonna do it, do it! In this movie they did it. Bebop and Rocksteady are the cartoon characters come to life. They crack stupid one-liners, they hit stuff, they shoot guns from a tank inside an airplane, and later they shoot guns from a tank that’s barrelling down river rapids. None of it makes any sense but it didn’t in the cartoon show and I didn’t mind then, and my sons don’t mind now. 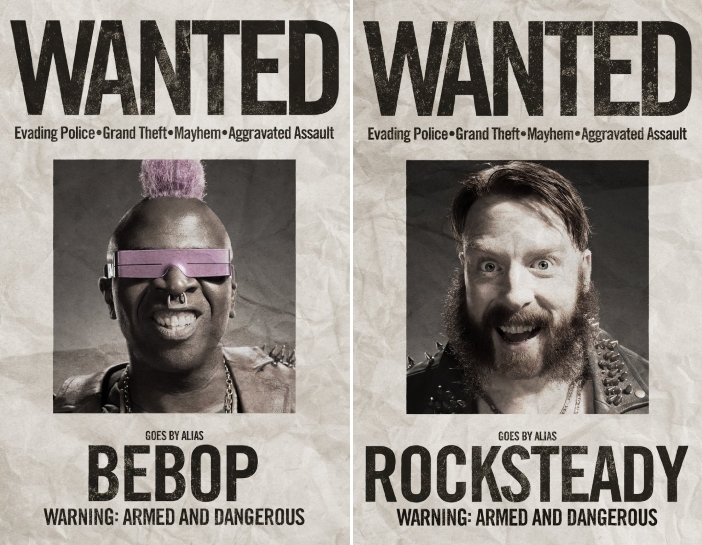 In the cartoon, Baxter Stockman is a nerdy genius scientist that, if you didn’t know better, was just a happy little nerd. But he just happens to work for the evil Shredder. Like, he is exactly how you would design the stereotypical “scientist helper that assists the good guys” except he works for the bad guy. He’s evil, but not menacing. He’s just evil because it’s how he wants to be, the way some people want to be vegan. And that’s how he is in the movie. He smiles, he laughs, he has a ball in life…he just happens to be planning the enslavement of humanity. I loved it and Tyler Perry is basically a live action version of the Stockman character from the 2012 cartoon series. My son can’t wait to see Mousers (hopefully that’s the next movie). Personally I hate those little robot killers, but I’m just scarred from the many times they annoyed me on the NES games growing up. 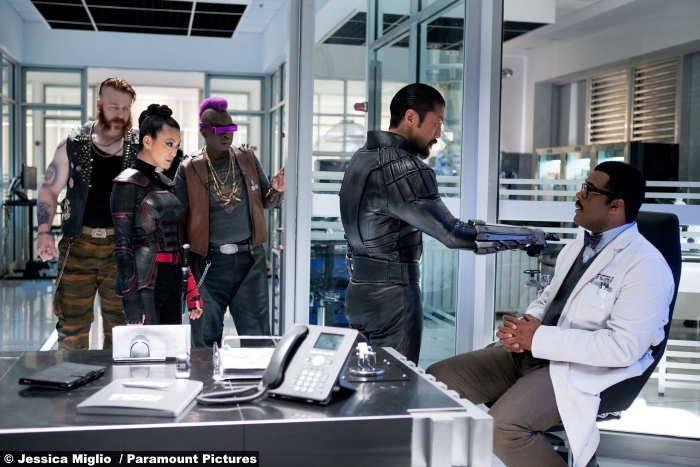 Next up is the best example of “embracing the weird” that I’ve seen in any comic book, video game, cartoon series—anything—adaption to film: Krang, his robot suit and Technodrome. In the cartoon, Krang was a round, bubblegum-colored, brain-like blob with weird tentacles that lived inside the belly button of a giant robot suit. His base of operations was the Technodrome, a giant silver ball with an eyeball on top of it.

Krang even has his weird, gargling voice. It’s not the same one from the cartoon, but it’s close enough to be a good (lower octave) imitation. His robot suit is faithfully recreated and during its fight with the Turtles, it does this thing where it plants its feet and spins its torso around with its arms outstretched, like a helicopter. I can’t say for sure that’s a move that it did in the cartoon, but I can say it’s a move I recreated many times while taking a bubble bath with my Ninja Turtles toys as a wee lad. The basic villain plot of the movie involves constructing the Technodrome in our dimension (yes, again just like in the cartoon, Krang is from another dimension), and as it nears completion it looks…yep…exactly like in the cartoons.

It’s all stupendously idiotic and I loved every second of it.

There’s also the Turtle Van (and yeah it’s just like the one I used to roll down the hallway growing up, and yeah it fires manhole covers just like that other toy I had), and someone yells out “cowabunga” (the Turtles don’t say it, but IT GETS SAID) and the turtles shout “turtle power!” unironically. I swear if Shredder’s voice had been Uncle Phil’s from Fresh Prince I’d either have to proclaim it the greatest movie ever made or just keel over from nostalgia overdose.

Sorry to beat a dead horse here, but it’s just so freaking refreshing to watch a kids movie based off a kids cartoon show and have it be exactly what you wanted it to be: A translation from small screen animation to big screen live action. During the climactic Turtles vs Krang fight I couldn’t help but think “this is so much more fulfilling than the fight at the end of X-Men: Apocalypse. Where FOX and Singer were afraid to go all-out with Apocalypse (in terms of look, character, powers, etc), Paramount/Nickelodeon and David Green (who replaced Jonathan Liebesman as director) let the silly hang loose and free.  As a result a movie that refused to take itself seriously becomes a movie I will happily watch and re-watch with my kids many times for years to come.

Can I nitpick it? If I wanted. I could talk about how the plot is very thin…and seems based on a video game? I mean the plot is basically “collect these three artifacts from around the world to win.” But it’s fine. It’s not riddled with plot holes or weighed down by too much exposition. Everything moves at a fast pace and you never have time to stop and laugh at the silliness; you just laugh with it, which is much more fun. 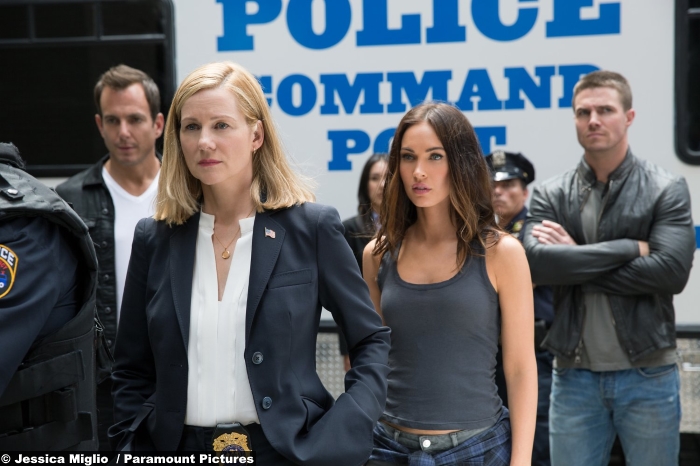 Also, after ten years of cartooning, plus six movies from three different interpretations of the franchise, it’s getting a little tiring having to watch yet another “Ralph and Leo butt heads” sub-plot. But I guess that’s as expected when you watch the Ninja Turtles as “Spock and Bones butt heads” is when you watch Star Trek. It’s fine.

And some of the humor falls flat, some of the acting is amateurish and Will Arnett is never really allowed the chance to be as funny as he can be (except for one ten second scene where he’s trying to stand on a rolling chair). But it’s fine. Nothing is so horrible that it makes you actively dislike the movie. You have too much fun to care about picking any nits.

9/10, but I realize that’s a very subjective score.

Of course the movie isn’t The Godfather or Schindler’s List, or even Jurassic Park or Iron Man, but it’s good dumb fun. Key word “good.” If you’re not late-20’s/early-30’s you may not get it and there’s no point trying to make you get it. But if you’re in that sweet-spot age where nostalgia hits you right in the feels (I mean they sing THE theme song during the end credits, for crying out loud), and you wore Ninja Turtles pajamas to bed every night, then you are going to adore this movie.