He Had Hairy Hands Review: If the supernatural doesn’t exist, then how come it does?

Shaun of the Dead, The League of Gentlemen, Army of Darkness, Beetlejuice, Carry On Screaming: comedy and horror have long been hand in hand in popular culture and the most recent addition is Kill The Beast’s ‘He Had Hairy Hands’.

The year is 1950 and on the foggy streets of London a backstreet abortion goes wrong and a child is born; but the child isn’t … right, not exactly human. 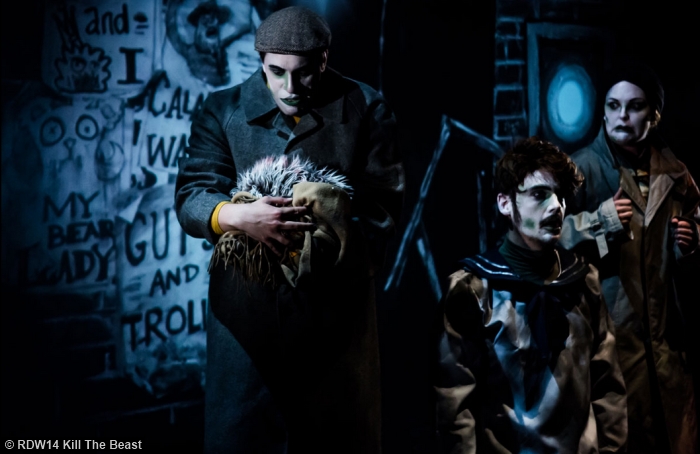 Fast forward to 1974 and the sleepy town of Hemlock-Under-Lye is shocked by a string of horrific murders, and only the legendary detective turned aerobics instructor Whitechapel can get to the bottom of this case. With a cast of four people portraying all the characters from the opening scenes abortionists through to Detective Whitechapel via the corrupt mayor (complete with hunting rifle to hunt ‘the biggest game of them all’), Sergeant Andy and his will they-wont they love interest Caroline, and a whole host of bit part appearances. 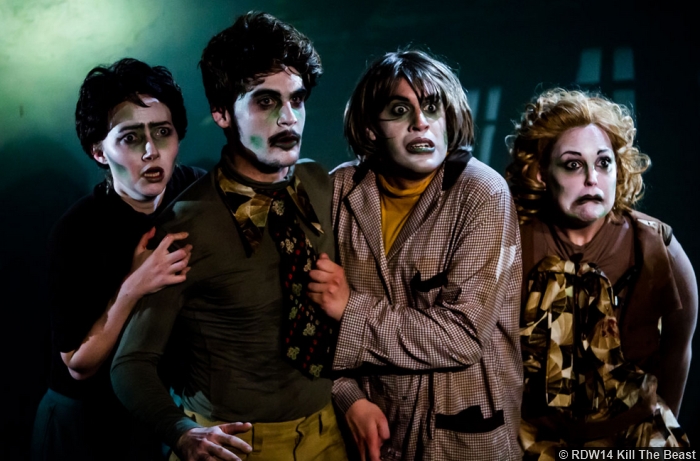 The script is razor sharp, intelligent and laugh out loud funny. Not an easy task for a show that features scenes in a morgue, a burning building, a backstreet abortionists and several murders. But this extraordinarily talented cast are more than up to the challenge, aided and abetted by a host of slick scene changes, multi use of props and costume. In the span of 2 minutes a dog lead on the moors becomes a phone line in a police station, becomes a telegraph line in an office, becomes a rope on a mountain, becomes a Latino bar, becomes a tape measure, becomes chains in a prison, each scene managing to get laughs before quickly moving on.

Jokes pile upon jokes at a speed Tim Vine would be proud of at a level The League of Gentlemen aspired to, though at no point did anything feel rushed or forced. Not a single beat is missed by the cast during anything in the show, from musical interludes by the Hemlock-Under-Lye Bunting Society to the cheesy yet earnest one liners from Eglantine Whitechapel (“They call me Miss, because I never do!”).

Kill the Beast, the company behind the hit stage adaption of Tom Bakers The Boy Who Kicked Pigs, have once again produced a show worthy of standing alongside the great macabre comedy shows of the world. If you see just one show this year make it this one! A genuine 5 star show.