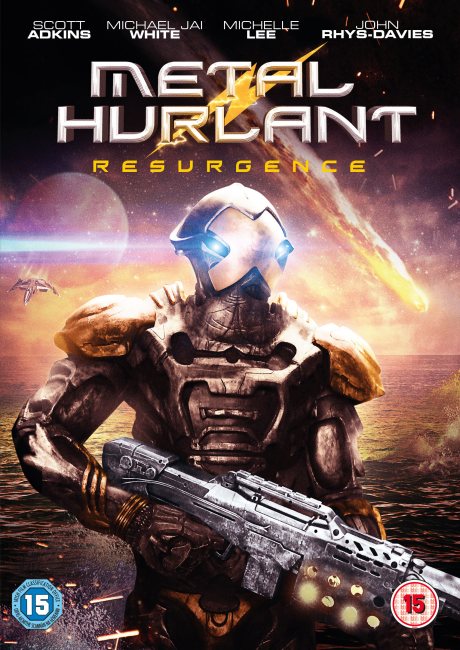 As the remains of a blazing asteroid travels across the universe, six adventures are uncovered which herald danger at every turn. Starring (Scott Adkins, The Bourne Ultimatum, Zero Dark Thirty), Michael Jai White (The Dark Knight), Michelle Lee (Pacific Rim, The Pirates of the Caribbean series) and John Rhys-Davies (The Lord of the Rings trilogy), The Metal Hurlant heroes are back.

With a planet devastated by war between human and alien races, an icy hush spreads as ashes settle across the charred landscape. Meanwhile, a loyal warrior seeks an elixir to cure his beloved princess from a terrible disease while, across the galaxy, two brothers battle for control of an almighty kingdom, each drawing upon their powerful and supernatural skills to claim victory.

In the follow up to Metal Hurlant Chronicles and based on the popular comic book franchise comes an action-packed, sci-fi adventure exploding with peril, destruction and the bravery of a select few in a vast universe.

Episode 1 – Whiskey in the Jar

Director: Guillaume Lubrano
Written by: Jim Alexander (comic book)
Starring: Michael Biehn, Dan Cade, James Marsters, Florin Stancu
Synopsis: A small-town sheriff receives a visit from a doctor with a talent for saving lives. But there may be more to the “talent” than meets the eye.

Director: Guillaume Lubrano
Written by: Stéphane Levallois (comic book)
Starring: Michelle Lee, Silvio Simac, Michael Jai White, Darren Shahlavi, Fabien Houssaye
Synopsis: The chosen one has been designated, in this world devastated by the war between humanity and Mecamorphes, he will carry in him the endormorphe, he will be our saviour.

Episode 6 – Back to Reality

Based on an old French comic-book series (Métal hurlant, which translates to “Howling Metal”), which itself was adapted for the US market as Heavy Metal, a title that should be more familiar to a lot of us.

This is the second series and it’s an anthology-based set of six tales, with the remnants of a long-dead planet (the titular asteroid) travelling through space being what links them all; the asteroid hurtles past during the time the events on each episode take place.

Among the unfamiliar names, there are a host of star genre actors, including Michael Bhien (a personal favourite of mine), Michael Jai White (another favourite), James Marsters (yet another favou… you get the idea) and Scott Adkins that could peak your interest if you’ve enjoyed them in their previous outings.

At only 22-25mins in length, the stories don’t overstay their welcome and are different enough to be able to watch them all in one sitting without overkill or tedium setting in. For example, ep.1 is set in the old West, while ep.2 takes us into a battle on another planet.

The acting is a bit hammy at times (but that isn’t always a bad thing) and any series that has an opening episode which is basically a Michael Bhien monologue is off to a great start.

As you would expect, with the show having a TV-budget, the effects can sometimes appear “cheap CGI”, but for me that just adds to the charm of the overall package. In addition, the costume, make-up and set designs are fantastic and really add to the stories being told, while the dialogue is two-parts meat to one-part corny, but again, this is pretty much standard in genre sci-fi at this level.

That and, of course, boobs.

For me, the first episode is the best of the series (again, that might be due to the wonderful Kyle Reese), but all six are really well put together tales with the obligatory twist at the end.

To put them in order of enjoyment (and remember, this is personal and you might feel differently, it would be -:

Having never heard of this prior to being asked to write a review, I went into it completely blind to it. Without any preconceived notions or knowledge, I only had the names in the cast I recognised and my thoughts while watching to go on and I was pleasantly surprised by the content.

If you can, seek out the first season and then sit down for a wonderful anthology of diverse tales, Michael Jai White and Scott Adkins kicking arse, Michael Bhien monologuing as only he can and surprising reveals along the way.

Definitely a must-watch that I can’t recommend highly enough. As with another Jai White release, Blood and Bone, I fear this will be unjustly overlooked and it deserves a wider audience.