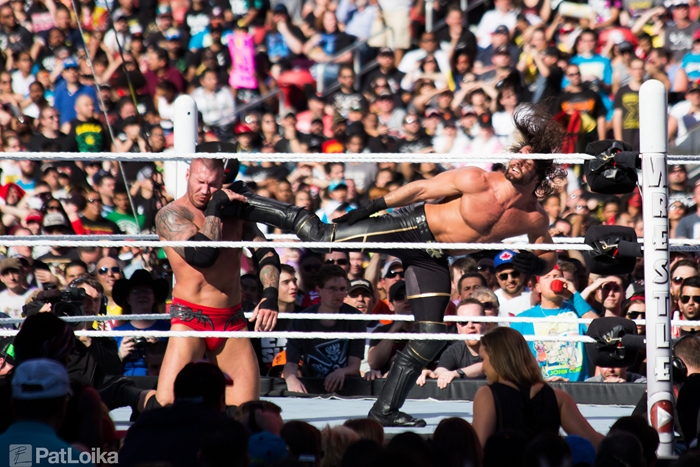 The 1141st edition of WWE Monday Night RAW came to you, live, from the Frank Erwin Center at UT Austin in Austin, TX. Last week on RAW, Brock Lesnar was denied a rematch against new champion Seth Rollins for the WWE World Heavyweight Championship and, after Rollins slipped out of the grasp of “The Beast”, Lesnar went absolutely ballistic, turning the announce table over on top of JBL and Booker T, dragging Michael Cole into the ring and leveling the commentator with the F-5, and even assaulting a cameraman. These actions left WWE Principal Owner Stephanie McMahon no choice but to suspend Brock Lesnar indefinitely! With a fine against “The Beast” pending, as well as possible legal action from Michael Cole, one thing is certain- there’s no telling when the world will see Brock Lesnar again and, while Lesnar is indefinitely suspended, Brock’s advocate Paul Heyman is not. Will Heyman appear on RAW to speak out on his client’s behalf? Will the advocate be punished for Brock Lesnar’s actions?

WWE World Heavyweight Champion Seth Rollins has rid himself of one threat for the time being with the suspension of Brock Lesnar, but the new champion is getting a true taste of what it’s like to be the man in WWE as both Randy Orton and Roman Reigns are gunning for the WWE World Heavyweight Championship. With Orton never getting his contractually-obligated title rematch from last year’s WrestleMania, not to mention his win over Seth Rollins at this year’s WrestleMania, “The Viper” believes that he is deserving of a title shot at Extreme Rules. Meanwhile, Roman Reigns is looking for revenge on the new champion after Seth Rollins ruined what could have been the biggest night of Roman’s career at WrestleMania. With Extreme Rules just three weeks away, will a new #1 Contender for the WWE World Heavyweight Championship be officially named on RAW?