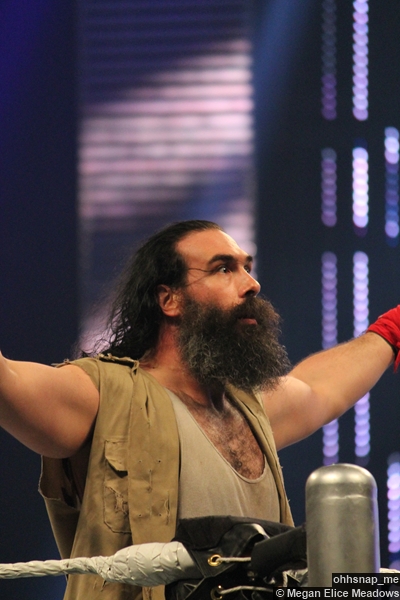 The ninth annual WWE Extreme Rules will come to you, live on the WWE Network and select pay-per-view providers at 8/7c, this Sunday night, April 26, from the Allstate Arena in Chicago, IL. As announced on RAW, the WWE Tag Team Titles will be on the line on the Extreme Rules Kickoff show, as well as a Chicago Street Fight. Also, with Paige out of action indefinitely, Naomi will take Paige’s place in the Divas Title match against champion Nikki Bella. Here is the updated card:

The Extreme Rules Kickoff show will air exclusively on the WWE Network starting at 7/6c (an hour before the pay-per-view).

In the Steel Cage Match for the WWE World Heavyweight Championship, the match can only end by pinfall, submission, or escaping the cage, either through the door or over the top with both feet touching the floor. In addition, Randy Orton’s RKO will be banned in the match and Kane will be positioned at ringside as the “gatekeeper”, meaning that he will be in charge of the cage door. The match will have no count-outs and no disqualifications.

In the Russian Chain Match for the United States Championship, both competitors will be tied to each other at the wrist with a steel chain and the only way to win is by incapacitating your opponent to the point where you can drag your opponent with you to all four corners of the ring, touching each corner in succession and the first competitor to achieve that feat will walk out as the United States Champion. The match will have no pinfalls, no submissions, no count-outs, and no disqualifications.

In the Last Man Standing Match, the only way to win is to beat your opponent to the point that they cannot get to their feet by the referee’s count of ten. The match will have no pinfalls, no submissions, no disqualifications, and no count-outs.

In the Chicago Street Fight, both competitors will be allowed to use any weapons they see fit with no disqualifications and no count-outs. The only way to win is by either pinfall or submission, which must take place inside the ring.

In the Kiss Me Arse Match, the loser of the match will be forced to kiss the arse of the winner. The match will be contested under standard match rules, meaning that the match can end by pinfall, submission, disqualification, or count-out.

It should be noted that, due to lingering problems with his shoulder, Intercontinental Champion Daniel Bryan is currently undergoing medical diagnostics to determine whether or not he will be able to defend the Intercontinental Title against Bad News Barrett this Sunday.