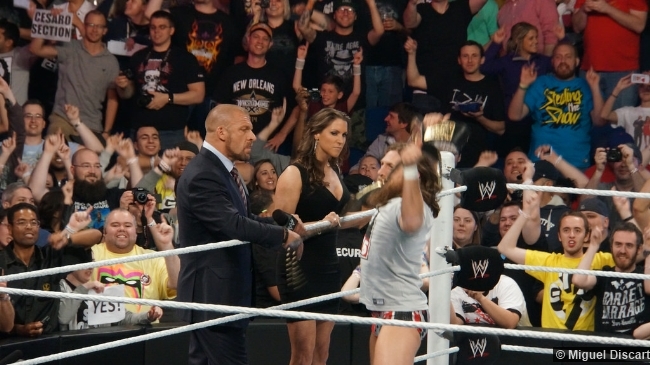 One night after an earth-shattering Survivor Series, the 1122nd edition of WWE Monday Night RAW came to you, live, from the Bankers Life Fieldhouse in Indianapolis, IN. In the illustrious thirty-four year history of WWE, the top sports-entertainment company in the world has repeatedly turned what many people thought was impossible into a very real possibility. From Mr. T teaming with Hulk Hogan to The Rock facing Hogan at WrestleMania X8 to The Rock, Hulk Hogan, & Stone Cold Steve Austin sharing a ring at WrestleMania XXX, WWE fans have seen time and time again that, just because something seems unlikely, it does not mean that it cannot happen and that theory was proven to be true at Survivor Series as, for the first time in his near 30-year career in the industry, The Man They Call Sting shocked the world when he made his presence known during the Traditional 5-on-5 Survivor Series Elimination Tag Match between Team Cena and Team Authority! With only Dolph Ziggler left for Team Cena and Seth Rollins left for Team Authority, WWE COO Triple H did absolutely everything in his power to make sure that Team Authority would win so that he and his wife Stephanie could keep their control of WWE, which included decking two referees, putting Dolph Ziggler down himself with the Pedigree, and even calling upon crooked referee Scott Armstrong, but just when it looked like Survivor Series would end with a modern day screwjob, the unmistakable presence of Sting stopped everyone in their track. The eight-time World Champion would make the most anticipated WWE debut of all-time a memorable one as “The Icon” circled “The Game” in the ring before dropping Triple H with the Scorpion Deathdrop. Sting would then set things right in the match by dragging Dolph Ziggler over the prone body of Seth Rollins and, three seconds later, Team Cena won the match with Dolph Ziggler as the sole survivor and the reign of terror of The Authority was finally brought to an end! However, the question still remains, why did Sting choose to get involved in the main event? Could the legend be looking to take the reins of WWE himself or was Sting simply doing what was right?

Regardless of how it happened, the fact of the matter is that Triple H & Stephanie McMahon will no longer be in charge of WWE and, as decreed by WWE Chairman & CEO Mr. McMahon, the former Authority will return to their desk jobs at WWE Headquarters and they will not be allowed to have any sort of influence over the lives or careers of any WWE talent. In addition, the only man who can ever grant Triple H & Stephanie McMahon control of WWE again is none other than John Cena, who told the couple that there is “no chance in hell” that will happen. With The Authority now a memory, who will take over control of WWE? Does Mr. McMahon have someone in mind to make the big decisions or will the Superstars be trusted to do whatever they please? Will chaos reign or will a new power-holder be revealed?

At Survivor Series, Bray Wyatt gave Dean Ambrose the opportunity to show that he is what Bray says he is, a “monster”, and Bray may have very well been right as “The Lunatic Fringe” went over the edge, attacking Bray with a steel chair, putting Wyatt through a table, and burying Bray in a pile of steel chairs. After showing just how crazy he can get, a match was made for the WWE TLC pay-per-view in three weeks as Dean Ambrose will face Bray Wyatt in a Tables, Ladders, & Chairs Match, where all three weapons will be legal! After learning of their date with tables, ladders, and chairs, what kind of chaos will go down between Bray Wyatt and Dean Ambrose on RAW?

Survivor Series also featured two big title changes as both the WWE Tag Team Titles and the Divas Title changed hands. While the victory by The Miz & Damien Mizdow over The Usos, Los Matadores, and defending champions Gold & Stardust in a Fatal 4-Way Tag Match yielded tag gold for the “A-Lister” and his stunt double, the talk surrounding the Divas Title match left a lot more questions than answers. In one of the shortest and most unusual Divas Title matches ever, the match between Nikki Bella and defending champion AJ Lee would start with Nikki’s sister and forced personal assistant Brie Bella making like her husband, Daniel Bryan, did a couple of years ago at WrestleMania, planting a kiss on AJ Lee! Naturally, this threw AJ Lee off of her game and, mere moments later, Nikki Bella had pinned AJ Lee and a new Divas Champion was crowned. Even more bizarre was Brie Bella’s reaction to her sister’s title win as, while everyone assumed that Brie was forced to help her sister, the big smile on Brie’s face told a different story entirely. Has Brie Bella’s time as her sister’s personal assistant former a Stockholm syndrome type of bond between the sisters or has the animosity between the twins been a massive hoax?