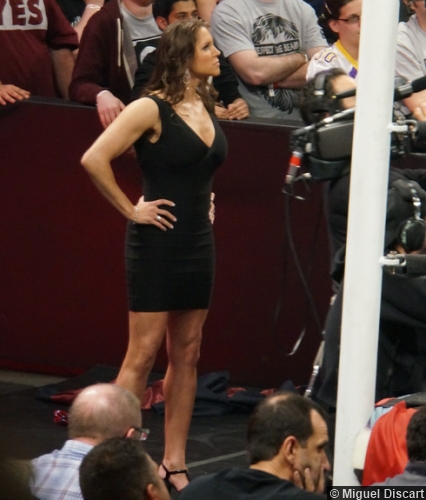 With all the controversy surrounding NFL player Ray Rice’s assault of his then-fiance that resulted in the player’s suspension and eventual firing from his team, WWE has revealed their new policy on domestic violence. In an interview with Yahoo Sports, WWE Chief Brand Officer Stephanie McMahon discussed this new policy, “We have a zero tolerance policy for domestic abuse. Upon arrest for such misconduct, our Superstars are immediately suspended and should there be a conviction, that Superstar or Diva would be terminated.”

This is the first time that WWE has publicly mentioned any kind of policy to prevent domestic violence and it is currently unknown if WWE established this policy due to the NFL scandal or if the company already had the policy and the Ray Rice scandal prompted WWE to be up front about how they will handle domestic violence if or when an issue does arise. Domestic violence among WWE talent has been a rare occurrence with the most notable instance having to be the tragic 2007 double murder-suicide of Chris Benoit, Nancy Benoit, and their son, Daniel, though, more recently, current WWE Diva Rosa Mendes was reportedly the victim of domestic abuse by former WWE Superstar Jackson Andrews (Steven Slocum) back in 2012.