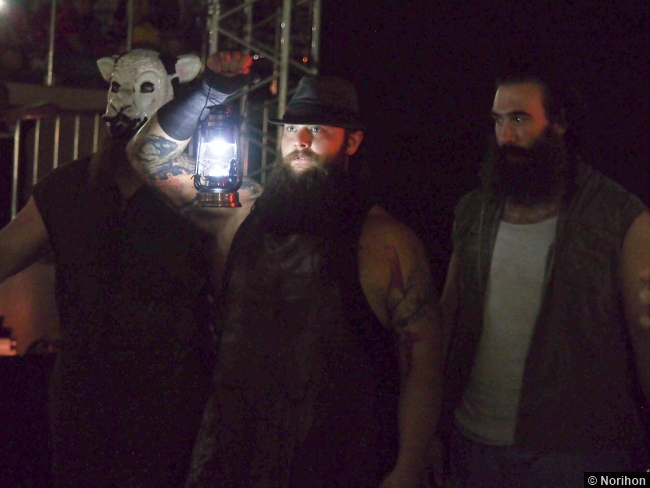 After losing to Rob Van Dam by count-out on WWE Main Event, Seth Rollins would be looking for redemption on SmackDown as “Mr. Money-in-the-Bank” would go one-on-one with “Mr. Friday Night” Rob Van Dam. In the end, it was a well-placed thumb to the eye that would allow Seth Rollins to gain the advantage, hitting two turnbuckle powerbombs and following it up with the Curb Stomp, pinning RVD for the win.

The Divas Champion was in action on SmackDown as Paige would go one-on-one with a former NXT rival, Emma, in a non-title match. In the end, it was Paige picking up a quick victory, locking in the PTO on Emma, making Emma tap out to pick up the win. After the match, AJ Lee would make her way down to the ring with a box of chocolates in her hand. With a big smile on her face, AJ Lee tells Paige that, even though it’s not Valentine’s Day, every day should be a day where you show your friends how much you “love” and “admire” them. However, the Divas Champion would refuse to take a chocolate, but when AJ Lee changes her tone and orders Paige to eat one, Paige eats one before spitting it out at AJ!

In the latest chapter of their intense rivalry, SmackDown would feature a Submission Match as “The Real American” Jack Swagger would go one-on-one with “The Hero of the Russian Federation” Rusev, with Lana in his corner, where the only way to win is to make your opponent. At the end of a punishing match for both Superstars, Jack Swagger would nearly break out of the Accolade by Rusev, but Bo Dallas would rush out, tossing a towel into the ring. While the referee throws the towel out of the ring, Bo Dallas trips Jack Swagger, allowing Rusev to lock in the Accolade again, leaving Swagger no choice but to tap out. After the match, Bo Dallas says that he “saved” Jack Swagger from further “embarrassment” and he wouldn’t have had to throw in the towel for Swagger if Swagger would have just followed his advice to “bo-lieve”. Swagger would try to attack Bo Dallas, but the weakened Swagger would collapse at Bo Dallas’ feet. Bo would then kick Swagger in the injured ribs before planting Swagger with the Bo Dog.

Following a vicious attack by Gold & Stardust on RAW, the WWE Tag Team Champions were on SmackDown as Jimmy Uso, with his injured brother Jey in his corner, would go one-on-one with Stardust, with Goldust in his corner. Before the match begins, Goldust apologizes for their actions on RAW, saying that they just really wanted the WWE Tag Team Titles and they lost their heads. Goldust then asks The Usos to accept the apology and The Usos accept before the match gets underway. In a quick match, Jimmy Uso was able to surprise Stardust with a roll-up, pinning Stardust for the win. After the match, Goldust would blindside Jimmy Uso before Gold & Stardust would again assault The Usos, sending Jimmy out of the ring before targeting the injured Jey Uso as Goldust delivers a big right hand to the face of Jey before Stardust tosses Jey Uso out of the ring right next to his brother.

After another disrespectful altercation with Director of Operations Kane backstage, the self-proclaimed “A-Lister” The Miz was forced into a match against United States Champion Sheamus, but before the match, The Miz would again call upon his stunt double, Damien Mizdow, who would take The Miz’s place in the non-title match with The Miz a guest on commentary. In the end, it was a dominant victory for Sheamus, who hits White Noise on Damien Mizdow en route to picking up the win. After the match, The Miz would cheap-shot Sheamus before making a quick escape, but Dolph Ziggler would surprise The Miz by tossing Miz back into the ring. Sheamus would then go for the Brogue Kick on The Miz, but Miz would duck out of the way and Damien Mizdow would take the Brogue Kick while The Miz escaped with his “moneymaker” intact.

Then it was time for the altered main event as, given the events of earlier in the night, what was originally a tag team match would be a 6-Man Tag match as Roman Reigns would join forces with “The World’s Largest Athlete” Big Show & “The World’s Strongest Man” Mark Henry to face all three members of The Wyatt Family, Bray Wyatt, Luke Harper, & Erick Rowan. At the end of the match, Big Show would plant Erick Rowan with a chokeslam before Bray Wyatt takes Big Show out, but Mark Henry would pick Bray up and plant Bray with the World’s Strongest Slam. Luke Harper then drops Mark Henry with a kick to the face, followed by a kick to Roman Reigns, as well. However, Roman would kick out and, when Harper goes for the Discus Clothesline, Reigns would catch Harper with the Spear, pinning Luke Harper to pick up the win for himself, Big Show, & Mark Henry.