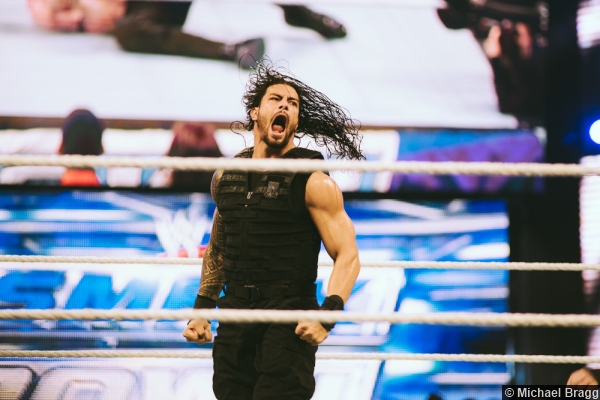 Six nights before Money-in-the-Bank, the 1100th edition of WWE Monday Night RAW came to you, live, from the Verizon Center in Washington, D.C. On last week’s Main Event, Seth Rollins revealed that there will be a traditional Money-in-the-Bank Ladder Match at this Sunday’s event and Rollins also revealed that he is the first Superstar to be entered in the match. In his weekly WWE.com interview with Michael Cole, WWE COO Triple H confirmed Seth Rollins’ announcement and, on RAW, the six men who will join Seth Rollins in the seven-man ladder match for a guaranteed WWE World Heavyweight Title shot will be revealed!

With ladders populating the stage, ramp, and ringside area, RAW kicks off with a fully-recovered Stephanie McMahon as the WWE Principal Owner makes her way to the ring. Stephanie says that if there is one thing she cannot stand, it is “gross negligence”, addressing SmackDown General Manager Vickie Guerrero and saying that Vickie could not do the simple task of getting her a cup of coffee. Stephanie then orders Vickie Guerrero to come to the ring and “face the consequences” and the GM nervously makes her way to the ring. Vickie says that she is so sorry for what happened to Stephanie last week, saying that she knows who tampered with Stephanie’s coffee, saying it was Roman Reigns. Stephanie says that she and Triple H gave Vickie very simple instructions and that was to not allow Roman Reigns to compete in the battle royal last week. Stephanie then says that, not only did Roman Reigns compete, but he won the battle royal and will be in the WWE World Heavyweight Championship Ladder Match at Money-in-the-Bank. Vickie promises Stephanie that it won’t happen again and Stephanie tells Vickie that she is “damn right” that it won’t happen again. Stephanie then tells Vickie that, for nine years, Vickie has been “riding the coattails” of her late husband, Eddie Guerrero, saying that they took “pity” on Vickie and, since they could not make her a Diva, they hired her as a General Manager. Stephanie continues, saying that Vickie could not even do her job as a General Manager correctly and, while Eddie deserves the respect of the fans, Vickie does not. Stephanie then begins to tell Vickie, “you’re fired”, but Vickie cuts the Principal Owner off, saying that she will do “anything” and will even “beg”! Stephanie takes Vickie up on her offer, ordering Vickie to beg for her job and Vickie gets on her knees, pleading with Stephanie. Stephanie then tells Vickie to stand up, calling Vickie “pathetic” before giving Vickie two options, saying that she can either fire Vickie Guerrero here tonight or Vickie can keep her job as SmackDown General Manager. Stephanie then adds that Vickie will only get to keep her job if she can win her match tonight, but Vickie argues that she is not a competitor. Stephanie asks if that is Vickie’s resignation, but Vickie quickly changes the subject, asking Stephanie who her opponent will be and Stephanie reveals that Vickie’s opponent will be Stephanie herself! Stephanie begins to say that Vickie doesn’t have the “guts” to face her, but Vickie stands up to her boss, saying that there is one name that people respect more than McMahon and that is Guerrero! Vickie then gets in Stephanie’s face, saying that if there is one thing that Eddie taught her, it is how to “lie, cheat, and steal” before accepting Stephanie’s challenge, throwing the microphone down, and storming out of the ring!

Before they defend the WWE Tag Team Titles against The Wyatt Family’s Luke Harper & Erick Rowan this Sunday at Money-in-the-Bank, The Usos were on RAW as Jimmy Uso, with Jey Uso in his corner, would face Luke Harper, with Erick Rowan in his corner, in the opening match of the night. During the match, a brawl would break out between Jey Uso and Erick Rowan on the outside, distracting Jimmy Uso long enough for Luke Harper to hit the Discus Clothesline, pinning Jimmy for the win.

After seeing his brother defeated at the hands of Luke Harper, Jey Uso would challenge Erick Rowan to an impromptu match and Rowan accepts and the match gets underway. With Jimmy Uso taking Luke Harper out on the outside, Jey Uso would hit the Superfly Splash on Erick Rowan, pinning Rowan for the win. After the match, Luke Harper & Erick Rowan would attack, tossing one of The Usos out of the ring before Harper blasts Uso with a big boot. Harper & Rowan then target the remaining Uso on the outside as Harper takes Uso out with the Discus Clothesline. Harper & Rowan then stand in the ring, holding the WWE Tag Team Title belts high.

With Divas Champion Paige a guest on commentary, Naomi, with Cameron also a guest on commentary, would go one-on-one with Alicia Fox on RAW. As tensions rose at ringside between Paige and Cameron, Naomi would hit a reverse DDT on Alicia Fox en route to picking up the win. After the match, Paige would get on the ring apron, holding her Divas Title belt high above her head, shaking the hand of Naomi.

In an impromptu match requested by Rob Van Dam, “Mr. Monday Night” Rob Van Dam would go one-on-one with the self-proclaimed “Architect”, Seth Rollins, on RAW. In the end, Seth Rollins would hit the Curb Stomp on Rob Van Dam, but Dean Ambrose would storm the ring, pummeling Rollins in and out of the ring before referees rush out to pull Dean Ambrose off of Seth Rollins. However, Dean Ambrose would break back through the line of referees, again getting his hands on Seth Rollins before referees finally restrain Dean Ambrose, giving Rollins the chance to escape. Dean Ambrose then grabs a microphone, saying that they might as well put him in the Money-in-the-Bank Ladder Match because, if they don’t, he is just going to show up anyways, saying that he will beat Seth Rollins down, take the briefcase and leave the arena with it, vowing that he will ruin the entire pay-per-view! Ambrose then says that he is coming to the Money-in-the-Bank pay-per-view and he is not coming to “play nice”.

Then it was time for Vickie Guerrero to not only take back her dignity, but keep her job as the SmackDown General Manager, coming out to her late husband Eddie Guerrero’s entrance theme, walked to the ring with confidence to go one-on-one with WWE Principal Owner Stephanie McMahon. With Vickie in the ring, Stephanie McMahon comes out, lacking her ring attire. Stephanie informs Vickie that their match is not going to take place in the ring, gesturing to a pool full of a mysterious brown substance, saying that the first competitor to get thrown into the pool will lose the match and, if Vickie loses, she will be fired. Stephanie then calls for backup as Layla, Rosa Mendes, & Alicia Fox make their way towards the ring and Vickie quickly exits the ring before the damage can be done. However, Vickie turns around to realize that Stephanie is blocking her only exit before Layla, Rosa Mendes, & Alicia Fox get a hold of Vickie and drag her towards the pool while Stephanie continues to taunt Vickie. The three Divas try to toss Vickie into the pool, but Vickie manages to knock Layla & Alicia Fox down before shoving Rosa into the pool. Covered in the mysterious goo, Rosa retreats to the back as Layla charges at Vickie, but Vickie sidesteps Layla and sends her into the pool as well, followed shortly by Alicia Fox! Vickie then celebrates her triumph before Stephanie catches Vickie from behind, knocking Vickie into the pool. As Vickie stands in the pool in disbelief, Stephanie informs Vickie that she is “fired”! Vickie then exits the pool as Stephanie continues to taunt Vickie, but Vickie turns around to face the Principal Owner and Stephanie quickly realizes the position that she is in. Vickie then grabs the most powerful woman in WWE and tosses her into the disgusting pool! After making her last moment a memorable one, Vickie Guerrero does the vintage shimmy of her late husband before pointing to the heavens and leaving WWE on a high note. Stephanie then struggles to flop her way out of the pool, taking the time to shove a referee into the muck as another referee gets her a towel.

Before they join Seth Rollins, Dolph Ziggler, Bad News Barrett, Rob Van Dam, & Dean Ambrose in the Money-in-the-Bank Ladder Match this Sunday, Kofi Kingston would go one-on-one with Jack Swagger, with Zeb Colter in his corner. In the end, it was Jack Swagger locking in the Patriot Lock on Kofi Kingston, making Kofi tap out to pick up the win.

Dressed in his best Abraham Lincoln attire, Damien Sandow would go one-on-one with Big E on RAW. In the end, Big E would hit the Big Ending on “Honest Abe” en route to picking up a dominant victory. After the match, Big E would take issue with Rusev & Lana and Lana would come out to address Big E, distracting Big E long enough for Rusev to attack Big E from behind as “The Super Athlete” beats Big E down before locking the Accolade in on Big E.

Then it was time for the main event as, in a rematch from SmackDown, the seven participants in the WWE World Heavyweight Championship Ladder Match at Money-in-the-Bank would be in action as John Cena would join forces with Roman Reigns and United States Champion Sheamus to face the team of “The Viper” Randy Orton, Bray Wyatt, Cesaro, with Paul Heyman in his corner, and Alberto Del Rio in a 4-on-3 Handicap Match. At the end of a wild match, it was Sheamus catching Cesaro with the Brogue Kick, pinning Cesaro to pick up the win for his team. After the match, “The Devil’s Favorite Demon” Kane would inexplicably make his way to the ring where Sheamus waited, ready for Kane. Before entering the ring, Kane would pick Roman Reigns up at ringside, tossing Reigns into the barricade before entering the ring, blasting Alberto Del Rio with a big boot and planting Sheamus with the chokeslam. After catching John Cena with an uppercut, Kane would pick Alberto Del Rio up and plant Del Rio with the chokeslam. Kane with then do the same to John Cena, leaving bodies all over the ringside area. With Kane standing in the ring, WWE COO Triple H comes out, standing next to Randy Orton as Triple H announces that Kane will be added as the eighth man in the WWE World Heavyweight Championship Ladder Match! However, Roman Reigns would come out of nowhere with a Spear to Kane, leveling “The Devil’s Favorite Demon” before glancing back at Triple H & Randy Orton!