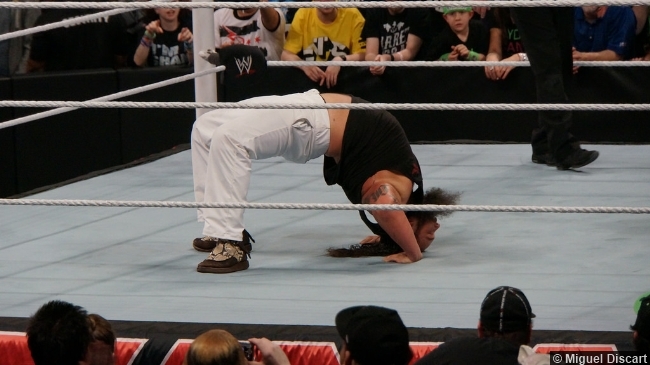 Two nights before Payback, the 771st edition of WWE Friday Night SmackDown came to you from the Philips Arena in Atlanta, GA. Before he collides with John Cena in a Last Man Standing Match at Payback, the evil leader of The Wyatt Family, Bray Wyatt, would get his first taste of the unforgiving match on SmackDown as Bray would go one-on-one with one of John Cena’s allies and one-half of the WWE Tag Team Champions, Jimmy Uso, in a Last Man Standing Match!

After their contract signing for a No Holds Barred Elimination Match at Payback with Evolution devolved into an all-out war that ended with Batista, Randy Orton, & Triple H, wielding his trusty sledgehammer, laying waste to The Shield and putting Roman Reigns through the announce table, SmackDown would kick off with The Shield as Dean Ambrose, Seth Rollins, & Roman Reigns would have the final say before they collide with Evolution at Payback.

Ever since Adam Rose and The Exotic Express paraded onto RAW a few weeks ago, the fun-loving newcomer has raised the ire of Jack Swagger & Zeb Colter, embarrassing both men over recent weeks, but on SmackDown, Adam Rose would make his in-ring SmackDown debut as the leader of The Exotic Express would go one-on-one with “The Real American”. Also on SmackDown, in a rematch from Extreme Rules, Divas Champion Paige would go one-on-one with Tamina Snuka in a non-title match just two nights before she defends the butterfly title against Alicia Fox at Payback.

Two nights before they wage war against Evolution in a No Holds Barred Elimination Match at Payback, SmackDown kicks off with The Shield as Seth Rollins says that, after what happened to them on RAW when they were destroyed by Evolution, with a major assist from a sledgehammer-wielding Triple H, they are more “focused” than ever. Dean Ambrose then says that Evolution are probably pretty happy with themselves right now, but they simply don’t care what happens to them and, at Payback, Evolution is going to find out just how “crazy” they are willing to get. Ambrose then says that things are going to get “real ugly” before Seth Rollins says that their No Holds Barred Elimination Match could put the numbers in their favor. Rollins continues, saying that it is a very likely scenario that Triple H could be left alone to face all three members of The Shield. Rollins then vows that they will “eliminate” Triple H and, at Payback, the end of Evolution will be “extinction”. Roman Reigns then says that Evolution made a “big mistake” by putting him through the announce table on RAW, saying that they are going to use every weapon they can get their hands on at Payback and they will destroy every announce table in the building before telling Evolution to “believe in The Shield”.

Before he challenges Sheamus for the United States Title at Payback, “The King of Swing” was in action on SmackDown as Cesaro, with Paul Heyman in his corner, would go one-on-one with Kofi Kingston. In the end, it was Cesaro catching Kofi Kingston in mid-air with a European uppercut, pinning Kofi for the win. After the match, Cesaro would send a clear message to Sheamus for Payback as Cesaro plants Kofi with the Neutralizer.

In a non-title rematch from Extreme Rules, Divas Champion Paige would go one-on-one with Tamina Snuka. Early on in the match, Paige’s Payback opponent, Alicia Fox, would walk out to ringside, doing her best to distract Paige, but when Alicia’s distraction failed to get the attention of the Divas Champion, Alicia would take the Divas Title belt, prancing around the ring with the title. This would distract Paige long enough for Tamina Snuka to land a superkick, but the Divas Champion would kick out and the antics of Alicia Fox would backfire as it would only infuriate Paige, who locks in the PTO (Paige’s Tap Out) on Tamina Snuka, forcing Tamina to tap out to pick up the win.

With Los Matadores in his corner, El Torito would face 3MB’s Jinder Mahal, with Hornswoggle, Heath Slater, & Drew McIntyre in his corner. In the end, it was El Torito hitting a moonsault on Jinder Mahal en route to picking up the win.

With Paul Heyman a guest on commentary, SmackDown would feature a Champion vs. Champion Match as United States Champion Sheamus would face Intercontinental Champion Bad News Barrett. At the end of a hard-fought match, it was Sheamus catching Bad News Barrett with the Brogue Kick, pinning Barrett to pick up the win. After the match, Sheamus would confront Paul Heyman at ringside, putting his hands on Cesaro’s advocate, intimidating Heyman.

Two nights before he goes one-on-one with Rusev at Payback, Big E was in action on SmackDown against Titus O’Neil. However, before the match could begin, Rusev’s social ambassador, Lana, comes out, saying that that every American will eventually “bow down” to “The Super Athlete” Rusev. With Big E’s attention on Rusev, Titus O’Neil would take the early advantage with a shot from behind, but Big E would battle back, looking at Rusev as he delivers the Big Ending to Titus O’Neil, pinning Titus for the win.

Then it was time for the main event as, two nights before he faces John Cena in a Last Man Standing Match at Payback, Bray Wyatt, with Luke Harper & Erick Rowan in his corner, would face one of John Cena’s allies in one-half of the WWE Tag Team Champions, Jimmy Uso, with Jey Uso in his corner, in a Last Man Standing Match, where the only way to win is to incapacitate your opponent to the point that he cannot answer the referee’s count of ten. At the end of a hard-fought match, Bray Wyatt would barely make it to his feet before the count of ten and this would prompt Luke Harper & Erick Rowan to strike as they blindside Jey Uso at ringside and Jimmy Uso would come to the aid of his brother, taking out Harper & Rowan before blasting Bray Wyatt with a superkick. Jimmy would then charge Bray, but Bray would move out of the way and Jimmy Uso would collide with the steel ring steps. Bray would then follow this up with the Sister Abigail on the arena floor, leaving Jimmy Uso motionless for the entire ten-count as Bray Wyatt picks up the win in the Last Man Standing Match.