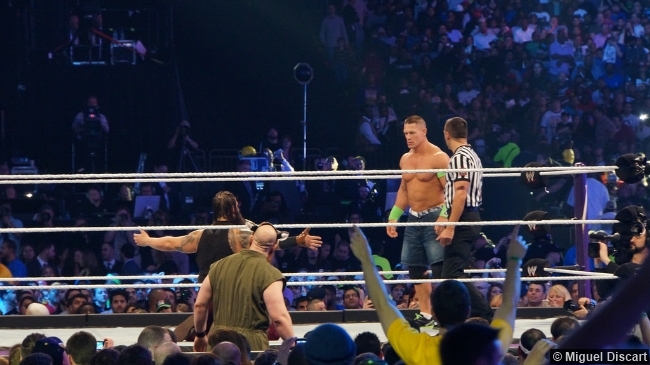 The 769th edition of WWE Friday Night SmackDown came to you from the Greensboro Coliseum in Greensboro, NC. After being challenged to a match at Payback by Bray Wyatt, John Cena would kick off SmackDown to respond to Bray’s challenge. Will John Cena accept the challenge and does Bray Wyatt’s promise to be the “last man standing” give a clue as to what type of match Bray wants with Cena?

After tweeting out earlier in the week that Batista was the “weak link” of Evolution, Dolph Ziggler would get the chance to prove his point on SmackDown when “The Show-Off” goes one-on-one with “The Animal”! Also on SmackDown, champions would be in action as United States Champion Sheamus would go one-on-one with Titus O’Neil in a non-title match and Goldust & Cody Rhodes would be looking to get back into the tag team title hunt when they face WWE Tag Team Champions The Usos in a non-title match.

The opening match of the night would see WWE Tag Team Champions The Usos squaring off with Goldust & Cody Rhodes in a non-title match. Despite a valiant effort by Goldust & Cody Rhodes, The Usos would perservere as Cody Rhodes gets caught with a superkick before one of The Usos come off the top with the Superfly Splash, pinning Cody for the win. After the match, a clearly upset Cody Rhodes walks past Goldust, storming away from ringside.

After getting pinned by El Torito last week, 3MB’s Heath Slater, with Jinder Mahal, Drew McIntyre, & Hornswoggle in his corner, would face El Torito, with Los Matadores in his corner. During the match, Hornswoggle would accidentally headbutt Heath Slater below the belt and this would allow El Torito to take advantage, hitting the springboard moonsault en route to picking up the win.

In a rematch from RAW, Nikki Bella would go one-on-one with Natalya and, this time, Eva Marie would serve as the Special Referee. In the end, it was Nikki Bella rolling Natalya up for the win, sparking a post-match argument between Natalya and Eva Marie.

In a match that was the result of an open challenge from Damien Sandow, the disgruntled Sandow would go one-on-one with Santino Marella, with Emma in his corner. In a relatively quick match, it was Santino striking with the Cobra Strike, pinning Damien Sandow for the win. After the match, Damien Sandow says that he is a “great soldier”, saying that they love it when the “smart guy” loses before Sandow’s microphone is cut off.

“The King of Swing” was in action on SmackDown as Cesaro, with Paul Heyman in his corner, would go one-on-one with R-Truth. Cesaro would make quick work of R-Truth, hitting the Neutralizer en route to picking up the victory.