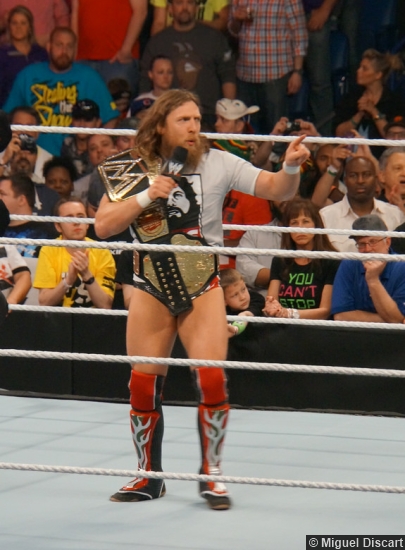 As announced by the WWE World Heavyweight Champion himself on RAW, Daniel Bryan would be undergoing neck surgery today (Thursday) with no timetable for his return. WWE.com is now reporting that Bryan underwent a successful cervical foraminotomy, which is an operation that decompressed a nerve in Daniel Bryan’s neck that was limiting his mobility and, no doubt, causing pain. The nerve issue was discovered by WWE physician Dr. Chris Amann and the surgery was done by world-renowned neurosurgeon and sports medicine expert Dr. Joseph Maroon. Strength is already returning to Daniel Bryan’s hand following the successful operation, but there is still no definite timetable for Bryan’s return to the ring. WWE is currently waiting for news on Daniel Bryan’s recovery before making the decision as to whether or not to strip him of the WWE World Heavyweight Championship, an issue that will be addressed on this Monday’s RAW. While nothing is confirmed at this point, the rumors making the rounds are that Daniel Bryan will be out of action for three months.

Should Daniel Bryan be stripped of the title? Post your comments in the box below.