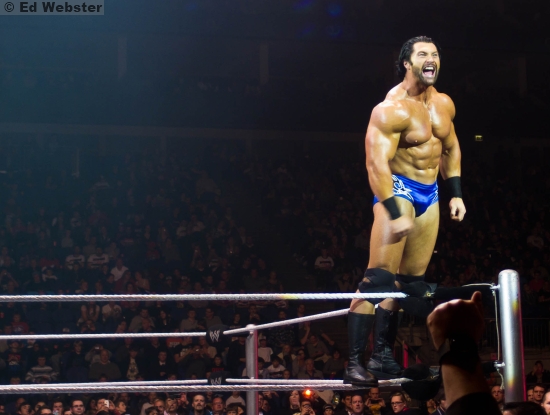 PWInsider.com is reporting that the WWE has released five of its talents from the NXT developmental territory as Mason Ryan (Barri Griffiths), Raquel Diaz (Shaul Guerrero), Oliver Grey (Joel Pettyfer), Shara (Sarah Backman), & Danny Burch (Martin Harris) have all been let go from the company.

Out of the five talents that were released, Mason Ryan arguably had the most successful career of them all as Mason has been with the company since 2009, making his main roster debut in 2011 when appeared on RAW and joined The New Nexus, which was being led by CM Punk. Ryan would go on to compete in that year’s Royal Rumble Match and would continue to compete with CM Punk and The New Nexus throughout the early part of 2011. Ryan would make his final New Nexus appearance at Over The Limit in 2011 where he teamed with CM Punk in an unsuccessful attempt to win the WWE Tag Team Titles. In June of 2011, Mason Ryan was injured and would be out of action for a couple of months before returning to television in September on WWE Superstars. Ryan then returned to RAW on September 22 and would mostly compete in multi-man matches over the next couple of months, even taking part in a Traditional Survivor Series Elimination Tag Match at the 2011 Survivor Series. After appearing exclusively on WWE Superstars through the first half of 2012, Mason would disappear from television for several months, but when WWE re-branded their FCW developmental territory to NXT, Ryan would join the developmental roster and would dominate most of the roster throughout 2013, but his winning streak would come to an end when he lost to Enzo Amore & Colin Cassady in a 2-on-1 Handicap Match, which would also be his last match in the WWE.

Shaul Guerrero is the daughter of Vickie Guerrero and the late Eddie Guerrero, making her debut as Raquel Diaz in the FCW developmental territory in 2010. Diaz would go on to win the FCW Divas Championship, holding the title for 197 days before losing it to Caylee Turner. When FCW was re-branded into NXT Wrestling, Raquel Diaz made the transition, debuting on the July 18, 2012 episode of NXT. In September of 2012, Raquel would be granted her release from the WWE, but would return to NXT a year later, making a couple appearances in the later part of 2013 before she was released for the second time.

Oliver Grey joined the developmental roster in 2012, making his debut on September 19, 2012. In the early part of 2013, Oliver Grey and tag team partner Adrian Neville become the first ever NXT Tag Team Champions. However, a couple of months after winning the tag titles, Oliver Grey suffered an ACL tear in his knee and was written off of television. Oliver would be out of action for over a year before returning to NXT on April 10, 2014 and, after losing a match to Camacho on the April 17 edition of NXT, Oliver Grey would disappear again before he was released on Wednesday.

Sarah Backman signed with the WWE in March of last year and was sent to NXT and, after nearly a year of waiting to make her debut, she was given the ring name, Shara. However, Backman would not get the chance to debut as she asked for and was granted her release.

Danny Burch signed with the WWE in late 2011 and was assigned to the NXT roster in June of 2012. Burch made his television debut on the May 15, 2013 episode of NXT where he lost to Bray Wyatt. During the remainder of his stint in NXT, Burch was primarily used as an enhancement talent before he was released from his contract.

What do you think of these NXT releases? Post your comments in the box below.