The February 3rd edition of Monday Night Raw came to us live from Omaha, Nebraska. I eat this wrestling stuff up in almost any form, but even I have to admit that this episode was an absolute bore. But there were a few notable highlights so let’s jump into it.

Like many episodes lately, this edition of Raw opened with the Authority and Randy Orton having yet another spat in the middle of the ring. Triple H and Stephanie McMahon seemed a little sick of Orton complaining about everybody failing to realize what a huge superstar he truly is. Trips even mournfully teased the idea of devoting their loyalties to another superstar altogether. He revealed that this “someone” different could be Orton’s opponent for the night – Daniel Bryan. The crowd goes bat guano and Stephanie agreed that if Bryan should defeat Orton, he may very well be the new face of WWE!

Same ole same more or less, but once the show finally got rolling, the fans were treated to some decent action. The Shield defeated Rey Mysterio, Kofi Kingston and Big E Langston in a six-man affair. Solid match here, but the main takeaway was another sign of dissension in the WWE’s most dominant faction as after the match, Seth Rollins had to come between Roman Reigns and Dean Ambrose, who’ve been at each other’s throats more often than not lately. We also saw a post-match appearance from the Wyatts, who delivered a cryptic promo in which they promised to decimate the Shield at the Elimination Chamber. Can’t wait for this one! 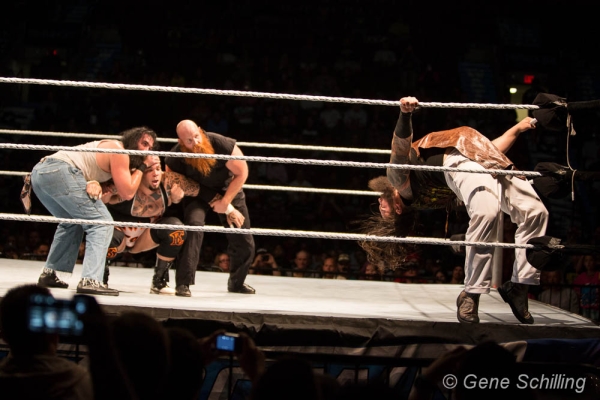 Christian bested Jack Swagger and picked up more momentum after qualifying for the Elimination Chamber on Smackdown. We saw more problems unfold between Swagger and Real Americans mouthpiece Zeb Colter. Even Antonio Cesaro, who was also at ringside, seemed pretty disgusted at Swagger’s performance. I smell another split coming here. WWE just can’t resist breaking up tag teams right when they seem to be hitting their stride. Break up the Usos and we riot!

One of the more exciting highlights from Monday Night Raw was the Steel Cage Match for the WWE Tag Team Titles. The New Age Outlaws were out first and as usual, did a bangup job of getting the crowd juiced for the match. With the seasoned NAO involved, it’s no surprise that this match moved at a snail’s pace in spots. Speaking of spots, it looked like Cody botched his when a failed moonsault attempt on Road Dogg from the top of the catch went awry, enabling Billy Gunn to sneak in with a fameasser and seal the win.

There were more matches and filler stuff, but let’s face it – Randy Orton and Daniel Bryan were the main course from the outset and the most interesting thing going on this lackluster show. Whether it was the overwhelming support from the crowd or some awesome vegan vitamins, Bryan was at the top of his game. Orton came at him in full on attack mode, but Bryan appeared to be one step ahead for a majority of the match and at times, made it look like a cake walk. It took a distraction from Kane for Orton to even seemingly have a chance, but even that was in vein as Bryan handled them both before delivering a flying knee to put the champ down for the non-title victory.

Daniel Bryan’s moment of glory turned out to be shortlived when Orton and Kane teamed up to dish out a post-match beat down, much to the discontent of the booing crowd. The Big Red Monster did his signature ring of fire of thing with Orton standing beside him, both belts raised as Raw thankfully comes to a close.

More dreadfully long promos from the Authority and Randy Orton. Shad Gaspard, I mean Titus O’neal, with a pointless squash win over a lowly Zack Rider. A God awful dance-off. Continuation of an inevitably short feud between Batista and Albert Del Rio no one really cares about. No Brock Lesnar. Orton continues to prove why he may the worst, most coveted champion of all times. Yeah. This was arguably the worst Raw of the young 2014. One if you missed, you might as well consider yourself lucky.