The 2014 edition of the WWE’s annual Royal Rumble is in the books. And what a memorable event it was. There was tons of action – an early match of the year candidate, a record-setting performance, and passionate revolting from members of the WWE Universe. Without further ado, let’s have a look at the key takeaways from the first big pay per view of the year.

Just when you thought the Daniel Bryan phenomenon couldn’t get any more insane, you have a scene like what unfolded in Pittsburgh. The crowd was white hot for Bryan all night and early on at least, things were looking up for the industry’s most over superstar. Bryan and Bray Wyatt put on a classic, an epic battle that looked to bring a fitting culmination to their intense feud. But despite an awesome showing from both performers, the hero lost, which set the pace for what would largely be a rocky event for the rest of the night. To sum it up, the crowd pretty much hijacked the event and buried everyone not named Daniel Bryan.

The WWE Universe was unruly for most of the night, but they held out hope that the wrongs would be righted – all the way up to the very last Royal Rumble entrant was revealed. When lifelong crowd favorite Rey Mysterio entered the match at number 30, the crowd loudly voiced their displeasure as it was apparent that Daniel Bryan wouldn’t be involved. As a result, the fans turned on Rey, bombarding him with jeers during his entrance and loud cheers when he was eliminated by Seth Rollins. While Bryan was never named as an official Rumble participant, the facts didn’t stop the crowd from letting the WWE know what they thought about this perceived gross injustice as the matched continued.

3. Mick Foley Was Not Impressed

Some of the biggest news coming out of the Royal Rumble was made on Twitter. WWE hardcore legend Mick Foley took to the popular social network to echo the sentiments of the fans, stating, “Does @WWE actually hate their own audience? I’ve never been so disgusted with a PPV”. Like the bulk of the Universe, Foley seems baffled over why the Powers That Be refuse to give the fans what they want – a full-length, uninterrupted run with Daniel Bryan as the face of the company. Foley’s son even chipped in on the matter, calling the PPV a ‘joke’ while taking a few stiff jabs at Triple H in the process.

The Shield looked good during the Rumble, but none more so than Roman Reigns. A budding star in the making it seems, Reigns eliminated a total of 12 superstars, shattering the record previously held by Kane. He was also one of the last two remaining entries. The WWE has been teasing a Shield breakup for a while now. How it will all dissolve is up for debate, but when the time comes, it looks like Reigns will be first in line for a strong push. Sure. Seth Rollins and Dean Ambrose bring their own unique merits to the table, but Reigns has the look and potential WWE tends to favor. 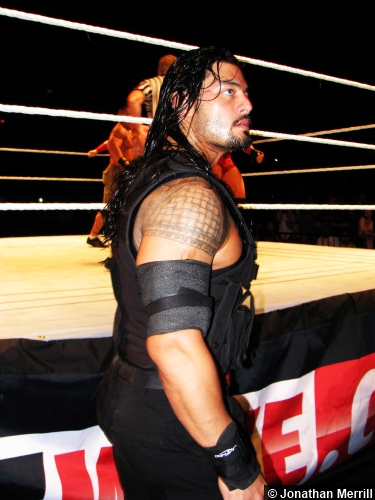 5. Cena and Orton Got No Love

One of the most anticipated matches going into the 2014 Royal Rumble was the WWE World Championship title rematch between champion Randy Orton and challenger John Cena. Although the two rivals delivered yet another stellar showing, the crowd let it be known that they were interested in anything but this match. Fan chants ranged from the blaring tune of “Daniel Bryan” to “Yes!” to “this is awful”. It was not pretty. With two of its biggest breadwinners battling it out for sports entertainment’s richest price, WWE couldn’t have been thrilled with this response.

A timely appearance by the Wyatt Family turned out to be John Cena’s downfall, causing him to eat a ruthless RKO after being distracted. Immediately thereafter, all three members of the family ambushed the ring and commenced to put a beatdown on Cena, which was to no surprise considering everything that transpired, to the delight of the fans. Anything could happen with the Elimination Chamber slated to take place in February, but for now, all signs point to a feud between Cena and the Wyatts as well as a possible match against Bray at Wrestlemania 30.

On paper, Brock Lesnar vs. Big Show looked to be a classic case of the immovable force against the irresistible object. The match was brutal, but nowhere near as competitive as you might have imagined. Lesnar destroyed Show with vile chair shots before, during, and after the match, which he won with relative ease by way of an impressive F5. Lesnar’s Wrestlemania fate has yet to be sealed, but he will likely carry in tons of momentum against whomever he’s scheduled to face on April 6.

WWE kicked off the Royal Rumble pre-show with a match for the tag team titles. Cody Rhodes and Goldust vs. The New Age Outlaws. The Brothers Rhodes entered the event on a roll, literally tearing through the tag team division. Unfortunately for the brother duo, they lost to the Outlaws, putting an end to their three month reign. The biggest takeaway from this story looks to be the inevitable split of the Brotherhood. Not only did Rhodes drop the fall, he was also eliminated by Goldust during the Rumble, setting up this long-coming sibling rivalry in crystal clear fashion.

Surprise entrants have become a common Royal Rumble occurrence. This year’s event delivered surprises in the form of NXT standout Alexander Rusev, Kevin Nash, wrestling God turned color commentator JBL, and a returning Sheamus, who had been sidelined since last August due to a shoulder injury. While you could argue that his character was growing rather stale before the lengthy absence, the Celtic Warrior received a warm pop from the hostile crowd and actually looked strong in the Rumble.

Batista was the last man standing in the ring at the end of the night, marking the second Royal Rumble victory for the Animal. If there was one surefire outcome, it was exactly what the WWE gave us – a win by Batista that would set up a bout for the WWE World Championship at Wrestlemania 30 against Orton. I thought this was pretty obvious from the moment his return was announced. But it didn’t matter to the fans, who cheered Roman Reigns as he and Batista squared off in the end, and showered the Animal with boos after his win. It was certainly a complete 180 from the roaring ovation he received when returning on RAW a few weeks back.

With all the controversy surrounding the 2014 Royal Rumble, you can’t help but wonder if the WWE will flip the script and change its Wrestlemania 30 plans. Will they deny the fans yet again by keeping Daniel Bryan out of the main event and title picture? Can they really afford to proceed with Orton vs. Batista considering the responses both men received? The only thing for certain is that the next couple of months will be filled with intrigue and spirited chatter about what’s to come.