The Trial of Triple H

Well, hello. If you’re a surfer of what we call the Internet Wrestling Community, you’ll be well aware of the amount of mud that gets thrown at Triple H. He’s accused of anything and everything, depending on the mood of the writer and what the prevailing topic in the WWE is this week.

How guilty is he of these heinous crimes? Let’s take a look at what exactly he’s been accused of, and what he can be held accountable for. Ladies and gentlemen… the court is in session. 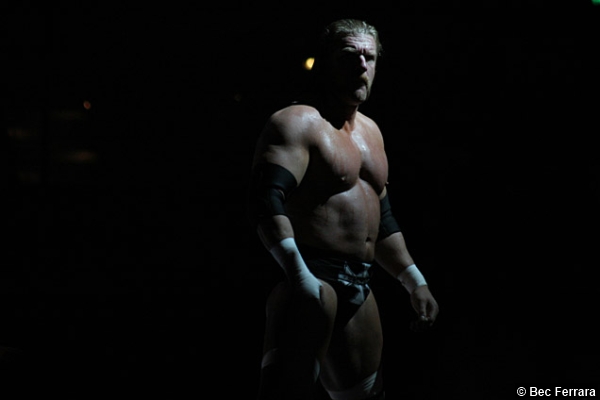 The accusation is simple. If Triple H doesn’t like you much, then your career is going nowhere. This has been thrown at him since the late 90s when he began his rise to infamy. Mick Foley, Chris Jericho, Booker T, Goldberg… all of these people and more are said to have been suffocated under HHH’s glass ceiling. Right now, the victim seems to be Daniel Bryan.

Why HHH? Because at the time this stuff started, he was an active competitor. Sure, the way he was just handed a World Title at the brand spilt was iffy, and he did seem to benefit from some odd favourable booking, but did he actively hold people down? Why now, when he has more to lose than ever before now that he’s an exec should he be dictating who and what is popular?

As far as the general public know, HHH is nothing to do with TV booking on a regular basis. He is hugely responsible for NXT, for my money, the best wrestling show in TV right now. Does HHH have some say in creative? Sure, I would say so. Is everything down to him? Hell no. Even to this day, everything is run through, and approved by Vince McMahon.

If it happens on Raw or Smackdown, ultimately, it’s Vince’s decision. Bad News Barrett is a gimmick that’s not exactly setting the world on fire, but it’s getting TV time simply because Vince is reported to be a huge fan of it. Go figure.

While HHH may have input to where angles go and how they go, he’s not responsible. He can influence things while on screen, with a live mic – and often does make some questionable remarks during promos – but he really doesn’t wake up and decide that Dolph Ziggler is getting buried for the next 6 months for no reason.

Sheamus was the supposedly the prime recipient of the fabled “workout” push. Drew McIntyre was another one for a while. The story goes that Sheamus and HHH trained together while travelling on the house show circuit, and as a result, HHH changed the result of the Royal Rumble in 2012 from the widely expected Chris Jericho win, to Sheamus winning.

Now, of all the things levelled at HHH, for my money, this is the most ridiculous. Sure, I don’t doubt that HHH would pull for his friends in any creative meetings. Who wouldn’t? It’s human nature. The idea that HHH could decide on the direction of the WWE from the Rumble right through to WrestleMania on a whim? To me, that’s nonsense and just looking for a scapegoat.

Looking at the Drew McIntyre story – yes, McIntyre received a big initial push – but it faded to the point that he’s now a member of 3MB. Not even the leader. One of HHH’s workout buddies is in a faction that’s led by Heath Slater! Yup, that HHH, being all sneaky and using his power to get such a prime slot for his friends, eh?

We come back to the Vince McMahon factor here. Vince decides. In 2012, Jericho was apparently the choice to win the Royal Rumble match. The whole internet was talking about it… and there’s your problem. Vince has never been one for pandering to people. If he thought the result of something was out there and being talked about openly, he wouldn’t think twice about changing it. That’s what I think happened in 2012 – Sheamus was the long term plan all along. HHH no doubt readily agreed, but again – Vince decides.

TRIPLE H ONLY CARES ABOUT MAKING HIMSELF LOOK GOOD

There’s no point anybody – not even HHH – defending this one! While he has become a lot more mellow in his older, more diplomatic incarnation, it is something he’s guilty of. HHH is a part time performer, let’s not forget. He’s a permanent on screen character – and for my money, a damn good one – but in the ring, he has maybe a dozen or so matches a year.

But he can still split a series with Brock Lesnar, “the beast incarnate” without much trouble.

Take nothing away from HHH – he is one of the top 10 ever to step in a WWE ring, without question. Should he hold his own against someone who is built on screen as the most destructive force in the company? That’s debatable.

There have been improvements. Big Show’s knock-out punch to lay out HHH would never have happened ‘back in the day’ – it’s just unthinkable. HHH has admitted that when Taz was working in the WWE with the ECW championship, he lobbied to go over him, and that it was pure devilment. So no, he’s not as bad as he once was, but that streak is still in him.

Closely linked to the last point, the HHH of the early 2000s was practically invincible. Even when he did lose, there would be some storyline plot point to save him – the phantom title win of Chris Jericho on Raw, for example. These days, even HHH himself realises that nobody wins all the time, except John Cena, obviously.

The WWE these days is built on the foundation of circular booking. Get a win on Raw? Every chance you’ll lose on Smackdown to give the other guy a win too. Everybody can beat everybody, expect the unexpected! No. It just makes everybody look weak. Ryback made it to the top of the card by steamrollering over everybody in his path. When he started to lose, he slipped back into midcard mediocrity.

HHH does lose now. Since the beginning of 2011, HHH has won only 4 televised matches! That’s less than the captain of the jobber patrol, Zack Ryder. This accusation can safely be put to bed for now, I think.

Let’s be honest here. If you were in the position that HHH is in, and started to slide down the card, wouldn’t you do your best to stay on top? Wrestling is a very self obsessed profession. For all the “guys in the back” like to proclaim it’s a brotherhood, if you don’t look out for yourself, nobody will. Sure, he’s maybe adding in suggestions as to how he can be a little more involved, and is no doubt enjoying the spotlight again, and taking great delight in being all over TV, both scripted and otherwise. He’s only human.

Here’s the thing though – for HHH to be in the position that he is, of corporate suit wanting his own way because he has the power – it’s a perfect reflection of how the Internet sees him. It’s a perfect storyline, the perfect character for him. HHH’s character boils down to two distinct roles; he’s either the rebel trying to bring down The Man one notch at a time, or simply put – he IS The Man. This isn’t the first “McMahon-Helmsley era” we’ve had in the WWE, and I wouldn’t bet it would be the last.

TRIPLE H IS WHY DANIEL BRYAN IS HELD DOWN

Well, this one can be shot down instantly, because Daniel Bryan isn’t being held down. Daniel Bryan’s star is on the rise, and he’s dragging everyone that’s associated with him along for the ride. The Wyatt Family have been elevated by their recent interactions with Bryan, Kane’s career has faltered since Team Hell No disbanded – he’s now just a man in a suit that does the bidding of his masters. A bulked up minion, if you will.

No, Daniel Bryan is not being held down. There’s a pay off in the long term for all the perceived shots he’s taken. Even if there isn’t – can any wrestling fan seriously say that when Daniel Bryan was in Ring Of Honor, flying around the world for indy dream matches and shots in small buildings that they thought he would ever make it to the WWE? Let alone be a WWE Champion? Never mind he is by far the hottest thing on TV right now.

That’s not being held down. To me, that’s intelligent booking, looking at the bigger picture, and it’s a case of a man who has total belief in himself and his abilities. A man making the most of every opportunity that is presented to him and making the most of it. For all John Cena and Randy Orton are duelling it out over the WWE Championship, the focus of the fans is clearly on Bryan. He will have his day in the sun. And it will be as sweet as Eddie Guerrero’s was for the hardcore fan.

TRIPLE H ONLY HAS POWER BECAUSE HE MARRIED STEPHANIE

Again, going by what you read on the Internet, HHH was a schemer who latched his wagon to Chyna when she was hot, and traded her in for Stephanie when the chance arose, just to make himself invincible. Once he was in with the McMahons, there was no stopping him and he’s now secretly running the entire industry, no doubt from a leather chair while stroking a white cat on his lap and chuckling manically to himself…

Hmmm. If that is his plan, then he’s devoted, I’ll give him that. The marriage is one thing, the kids is another. That’s out and out dedication to your schemes. I think we can safely say there’s an element of truth to the fact that he has been given a longer leash because of Stephanie, but it’s a bit far to insinuate that that’s all he was doing.

From almost every interview you’ve heard, kayfabe or otherwise, people have said that HHH was always obsessed with the business, not just the in ring stuff, but behind the scenes and had a lot of input to his own angles and character in his prime. Vince is a smart man, and utilises smart people around him – look how long Pat Paterson was involved in booking the Rumble match – so I see HHH’s rise to the top as a natural progression. He would always have got there, but perhaps the Stephanie factor has sped it along.

So, is Triple H the cause of the WWE’s woes? My verdict sees him not guilty by a 5-2 majority… and I’d say that’s about fair. You can see where he does get the reputation from in certain cases, but ultimately, the Internet loves a ‘big bad’ to rally against. With Vince Russo gone from the scene (for now) the only great big target left is Triple H.

Until next time – have fun, go mad…