By Dan
Wrestling Book Reviews
This page contains affiliate links. At no additional cost to you, we may earn a commission if you click through and make a purchase. Learn more

The book actually starts off by looking at Triple H’s first taste of bodybuilding as a teenager, he talks about his instant love of bodybuilding and how he loved the close-knit community of the gym he worked out in. He talks about bodybuilding being a passion of his, but being a pro wrestler was his dream. The book then looks at Triple H’s introduction into the world of pro wrestling, he talks candidly about his days with the legendry wrestler and trainer Killer Kowalski, and then his first break into the “big time” when he signed for WCW. Triple H talks about his first try out matches with WCW, his dealing with Eric Bischoff and his time spent in WCW. He talks about being a “G.U.D” which is what Bischoff labelled him (I’ll let you read the book to find out what he meant by that). Triple H also talks about his friendship with Terry Taylor, and how Taylor helped him so much with his development of his wrestling ability. 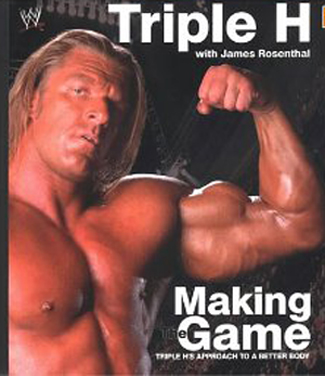 The book moves on to look at Triple H’s debut in the World Wrestling Federation, he briefly talks about his departure from WCW, but goes on to talk about his first taste of the WWF, and his dealings with Vince McMahon. Triple H talks about his attitude in the wrestling business, and how his attitude differed from some of the guys at the time. Triple H then goes onto talk about how he had pleased the WWF management enough to be chosen to become the 1996 King of the Ring, but this never came about after the Clique incident at Madison Square Garden. He talks about what happened at that event, the punishment he received and why it was a learning curve for him.

Further into the book Triple H talks about Shawn Michaels, Chyna and D-Generation X. He talks about how he met Chyna, and how the origins of DX were formed, and why the faction was so successful during the “Attitude” Era. The book looks at how Triple H took over from Shawn Michaels as the leader of DX, when Michaels retired in 1998. Hunter talks about the second phase of DX, with the additions of X-Pac, Billy Gunn and Road Dogg into the group. Triple H then talks about his eventual evolution from being the leader of DX, to becoming “The Game”, and thus becoming the main event star he had longed to be.

The book’s focus shifts a little and looks at the whole “McMahon – Helmsley Era”, Triple H talks about how the whole angle came about after Vince Russo had sown the seeds for the storyline in which Stephanie McMahon was to marry Test, but Russo left the WWF to go to WCW and nobody knew how to finish the angle, and it sort of all snowballed from there, in a good way though. The culmination of the storyline came at Armageddon 1999, during a match with Triple H vs. Mr McMahon, Stephanie turned on her father, and thus the “McMahon – Helmsely Era” began, and Triple H became the WWF’s top “heel”.

The next part of the book looks at the injury Triple H sustained during a tag team match in which he was teaming with Stone Cold Steve Austin to take on Chris Benoit and Chris Jericho in a WWF Tag Team Championship match. During the match, Hunter tore his left quadriceps muscle , and sustained an injury that could have ended his wrestling career for good. However, Triple H had surgery and went into intensive rehab to beat the injury and do what most doctors thought he could never do, return to the ring. During this chapter, Triple H talks about his fight to get back into the ring, about his rehabilitation process and his training plan, and his ultimate return to the ring.

Towards the end of the book, Triple H discusses his climb back to the top of the WWE ladder, with his title victory at Wrestlemania X8, and then his relationship with his idol “The Nature Boy” Ric Flair. Triple H talks about how Evolution was formed, and why Randy Orton and Dave Batista were picked to be the other members of the group. The final chapter, and maybe the most revealing is the chapter about Triple H and Stephanie McMahon. In this chapter Triple H talks about how the relationship between the two started off as a professional relationship, but ended up becoming personal, as they spent more time together. Triple H also talks about the obstacles which stood in the way of the of the pair, including his boss, Vince McMahon, but eventually the couple were able to overcome these, and now have a great relationship together.

The book is not only a biographical account of Triple H’s life, but as you can tell by the title, it’s a book full of bodybuilding and nutrition advice. Between every chapter of Triple H’s life, there is a chapter looking at bodybuilding, whether its nutritional advice, guidance on how to build up your abs, or training your chest the book is full of tips and advice, all of which is lost on me. The book also comes with exercise tips, with training plans and pictures of the exercises.

I’ll be quite honest with you, when I first picked up this book I wasn’t really expecting much at all, I thought it was going to be full of bodybuilding information which would be of absolute no use to myself. The book is full of bodybuilding information, but its also a brief biography into Triple H ‘s wrestling career, something I didn’t really expect. The chapters looking at his time in WCW and his first few years in the WWF are really worth reading, on some subjects he is quite candid about his career. Another chapter which is interesting to read is about his relationship with Stephanie, a topic which is often discussed, and its good to hear the truth on the relationship.

As for the bodybuilding content in this book I can’t really comment, I mean I read through it, and there was some good exercise tips and nutritional advice in the book which could be helpful to anyone, but there is a lot of bodybuilding content which I know absolutely nothing about.

One thing that struck me while reading this book, is that there is always loads of negative stuff written about Triple H on the internet or in magazines, but reading this book has given me a new found respect for the guy, juts by reading the book you can tell he has a huge passion for the wrestling business and has worked hard to get to get where he is today.

As a autobiography, the book is brief but enjoyable, you’ll probably get through it in one afternoon as it only lightly covers his career, but for people who are interested in bodybuilding then you’ll probably enjoy the book a lot more than the average fan will. The book is really only aimed at two audiences, Triple H fans, or Bodybuilding fans, if you neither of these you probably won’t find the book as enjoyable as others available.

One thing is sure though, when Triple H does releases his full autobiography some years down the lines, I’ll definitely buy a copy!