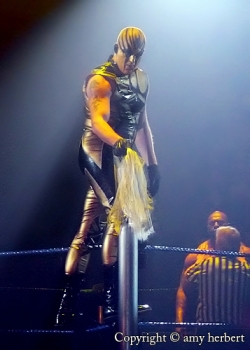 Five nights after Battleground, the 738th edition of WWE Friday Night SmackDown came to you from the Nationwide Arena in Columbus, OH. After overcoming The Shield at Battleground to get their jobs back in the WWE, the Rhodes brothers would be in action on SmackDown as Goldust & Cody Rhodes would face the bizarre and frightening “brothers” of Bray Wyatt, Luke Harper & Erick Rowan!

Also, after pinning Curtis Axel in tag team action this past Monday night on RAW, R-Truth would get a rematch for the Intercontinental Championship as R-Truth would challenge Curtis Axel on SmackDown with the prestigious title on the line.

SmackDown kicks off with SmackDown General Manager Vickie Guerrero, who says that Big Show committed a “heinous atrocity” on RAW when he knocked out WWE COO Triple H. Vickie calls Big Show a “deviant” who should have been fired a long time ago, saying that Big Show is now “unemployed” and that Big Show got what he deserved. The GM is then interrupted by World Heavyweight Champion Alberto Del Rio, who confronts Vickie in the ring. Del Rio pleads with the GM to reconsider her decision to have him defend the title against John Cena at Hell in a Cell, saying that there has got to be something that he can do to change Vickie’s mind. Del Rio then uses his Latin charm to try and sway Vickie and the GM says that, if he really wants to sway her, then he should kiss her. The champion does plant a kiss on the GM, but only on the cheek and the GM demands more, asking for a kiss on the lips from the World Heavyweight Champion! Hesitantly, Del Rio kisses the GM, but Vickie insists that Del Rio do it like the “Mexicans”, not like the “gringos”. With that, Del Rio holds the GM in his arms and plants a romantic kiss on his middle-aged boss. Having successfully toyed with the World Heavyweight Champion, Vickie suggests that Del Rio kiss her “somewhere else”, gesturing to her backside!

“Mr. Money-in-the-Bank” Damien Sandow then makes his way to the ring, saying that Del Rio is a “phony”, accusing the champion of using Vickie as a “sex object” to get what he wants. Sandow then says that Del Rio is trying to beg his way out of the match with John Cena because Del Rio knows that he will lose. Sandow continues, saying that Del Rio’s presence is not “fitting of a champion” and, when he gets the chance, he will prove that he is the “better man”. The GM then announces that the main event of SmackDown will see a one-on-one match between Alberto Del Rio and Damien Sandow! After the GM exits the ring, Del Rio gets a cheap shot in on Sandow, sparking a brawl between the reigning champion and the potential future champion, which ends with Sandow chasing the World Heavyweight Champion out of the ring.

The Divas were in action on SmackDown as the team of Natalya, Kaitlyn, & Eva Marie, with Jo-Jo in their corner, would face the team of Brie Bella, Cameron, & Naomi, with Nikki Bella in their corner, in 6-Diva Tag action. In the end, it was Naomi catching Kaitlyn with a roll-up, picking up the win for her team.

Two weeks before he defends the World Heavyweight Championship against the returning John Cena at Hell in a Cell, World Heavyweight Champion Alberto Del Rio would go one-on-one with “Mr. Money-in-the-Bank” Damien Sandow in a non-title match on SmackDown. At the end of a hard-fought match, it was Alberto Del Rio taking Damien Sandow out at his injured knee, leaving Sandow open for the cross armbreaker from Del Rio, who forces “Mr. Money-in-the-Bank” to tap out to pick up the win.

In 6-Man Tag action, The Prime Time Players would enlist the assistance of The Great Khali to combat all three members of 3MB, Heath Slater, Jinder Mahal, & Drew McIntyre. In the end, it was The Great Khali putting Heath Slater down with the Khali Chop, picking up the win for his team.

After defeating Seth Rollins & Roman Reigns of The Shield to get their jobs back in the WWE, “The Bizarre One” Goldust and his younger brother Cody Rhodes would face the bizarre “brothers” of Bray Wyatt, Luke Harper & Erick Rowan, with their leader seated at ringside. In the end, it was Cody Rhodes using his quickness to catch Luke Harper off-guard with a sunset flip, pinning Harper to pick up the win and put the first loss on The Wyatt Family!