Triple H is probably one of the biggest stars that the WWE has ever seen, he has won all the major titles in the WWE, and he has had some epic battles with the likes of Cactus Jack, Kurt Angle, Chris Jericho and The Rock, but he still hasn’t had his own Video/DVD, until now. 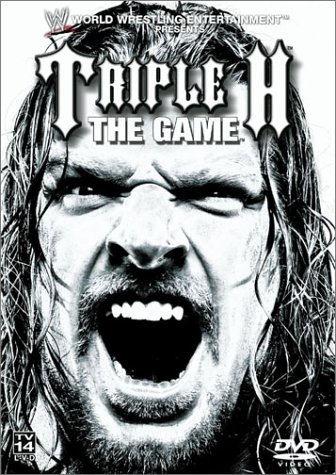 Follow the journey Triple H has taken from his early days in WCW, to his rise as a main event star in the WWE. Look how his character has developed, with exclusive WCW footage, interviews with Ric Flair, Undertaker, Steve Austin and many more WWE superstars, plus listen to comments from “The Game” himself. Also see how Triple H came back after a near career ending injury, and see how he came back to win the Royal Rumble 2002 and how he then went onto win the WWE World Championship at Wrestlemania X8.

Triple H: The Game will hit all good Video and DVD stockist on October 7th, courtesy of Silvervision.co.uk. So sit back, relax and enjoy, while I review Triple H: The Game on DVD, to find out if it is “that damm good”

Ok, the Video/DVD kicks off with various people giving their thoughts about Triple H, people like Pat Patterson, Ric Flair, Steve Austin, Edge and various other people, just the usual about Triple H being a “ultimate professional”. Triple H then talks about his first memories of watching wrestling with his father, watching Chief Jay Strongbow. Triple H talks about how Ric Flair was an inspiration to him, and we see some really old footage of Flair wrestling. Triple H talks about a match in which he and Ric Flair teamed up, and he talks about after the cameras stopped rolling he told Flair that he would not be in the business if it wasn’t for Flair, which resulted in Flair nearly being in tears.

Steve Austin talks about Triple H’s WCW days, and we are shown some old WCW footage with Triple H as a guy called Terra Ryzing, I must admit, just looking at the brief clips of Triple H, he does remind me of a early Ric Flair, but that’s the only time I’ll ever agree with Tony Schiavone. William Regal says that Triple H was offered a contract to go to the World Wrestling Federation, and he was a bit reluctant to accept, but William told him he should accept. Moving on slightly, Undertaker and Steve Austin comment about the MSG incident with Trips, Kevin Nash, Scott Hall and Shawn Michaels. Austin says that Triple started to blossom after he left the clique, and Undertaker says that he had more respect for Triple H because he was the one who took all the flack for the incident, yet he never let it stop him. This is very interesting, it may not be totally a “shoot”, but it still is interesting to hear what Taker and Austin think of Triple H.

Moving on, segments from an interview with Triple H and JR are shown, it is the beginning of the “The Game” Era interview from ‘99. The attention is then turned to the McMahon vs. Triple H feud, and footage of Armageddon 1999 is shown. Then it goes to the following night to Raw, when Triple H and Steph announce the McMahon-Helmsley Era. This segment covers the whole time from Triple H winning the WWE Championship from The Big Show, to Mick Foley getting fired on Raw, and then the return of Cactus Jack. To be honest I think this is just the video montage from the Royal Rumble 2000, so there is nothing new, unless you haven’t seen the Rumble. A brief look at the Iron Man match at Judgement day 2000 with Rock and Triple H, then Triple H goes onto talk about being a number 1 “heel” in a baby face territory. This section is ok, but it really is just looking back at the first few months of 2000, and I can’t seem to figure out why they have not covered The Rock vs. Triple H feud in detail. This probably was the best point in the WWE for a hell of a long time, and there is not much coverage of it at all.

A look at the comical side of Triple H now, with various clips of footage being shown, mainly from around the year 2000. Clips of the Mankind/Triple H sketches are shown, as well as a tribute video showing Mick Foley scratching his “sizeable butt” and just a whole bunch of other stuff.

Now onto the feud or angle which I enjoyed the most in 2000, The love triangle with Stephanie, Triple H and Kurt Angle. A video package of the highlights of the feud is shown, including that kiss with Angle and Steph. Footage of the Triple Threat match at Summerslam 2000 is shown, particularly the moment when Triple H attempted to put Angle through the trusty Spanish announcing table, however the table gave way, and in actually fact Angle was temporally knocked out, something which I never noticed at the time. Anyway, getting back, there is some talk about Triple H being a ring general, nothing really interesting to note.

Fast forwarding to Wrestlemania X7 now, and the Triple H vs. Undertaker match. Both men give their thoughts about the match Triple H talks about having Motor-head perform his theme song, and The Undertaker talks about how special the match was to him, Taker says that he had a lot to prove in that match, and he respected Triple H a whole lot more after that match. Yep, you can’t get away from it, its time for that Monday night, its time that Raw, and its time for that tag team match. Triple H and Stone Cold vs. Chris Benoit sand Chris Jericho. The usual stuff, although Triple H talks about the injury and he describes what happened toward the ending of the match, also Chris Jericho and Triple H explain why they continued with the match, and there is some footage from after the cameras went off air. Then it goes to the operation and his rehabilitation process. Triple H talks about how he moved into a hotel room Birmingham, and how he lived to return to the WWE, haven’t we heard that before?

The Return, Triple H talks about the WWE Vengeance PPV, he talks about how people were mislead into thinking he would be there, but his rehab took a little longer than pre-expected. Then he talks about the ovation he got when he returned to the WWE on the 7th January 2002-09-10, this stuff is pretty boring really, if you have seen it once, you have seen it all before, however it probably needs to be put in. The Royal Rumble 2002 match now, the footage of the final few men is shown, and of course footage of Triple H winning the Rumble is shown. Now, Triple H talks about his favourite pastime apart from wrestling, have you guessed it yet? That’s right, Triple H favourite hobby is Body Building. This is probably the part I found least interesting, basically because I’m not into Body Building at all, in fact I’m not into any form of exercise at all, but that’s another story. If you are into bodybuilding you may find this interesting, just not my cuppa tea.

The second most famous wrestling “marriage” is covered now, or more so, the break-up of the “marriage”. This segment looks at the failing relationship between the two, it looks at the renewing of the marriage vows, and of course it looks at the “pregnancy”, this is basically just a recap of all the events that lead up to the Triple H and Stephanie’s divorce. I mean lets face it, Triple H and Stephanie, are no Randy Savage and Elizabeth, are they? This follows up and covers the Jericho vs. Triple H match at Wrestlemania X8, where Triple H won the championship. It then goes to the Raw where Triple H fought both Chris Jericho and Stephanie, and of course, Triple H beat Stephanie, and everybody thought their dreams had come true as Stephanie left the WWE, but why do all good things have to come to an end? I’ll never know. The Video/DVD wraps up with Triple H briefly talking about where he is at, and what he has achieved in the WWE. Once again, there is nothing new, or that interesting here.

What ever you think of Triple H, whether you love him or hate him, he certainly has had a good and interesting career. From his days in WCW to his time as WWE World Champion, Triple H has always performed well. This Video/DVD is a good reflection on his career, I personally like it. The WCW footage is something that I have never seen before, and for any fan it would be interesting to see Triple H in his pre-WWE days with comments from Steve Austin and William Regal, this is certainly the most interesting part of the DVD. Another interesting point was when Austin and Undertaker talked about Triple H’s involvement in the Clique, and Triple H taking all the flack for the incident at MSG. The Video/DVD does get boring, especially toward the end, with the Stephanie, Jericho and Triple H stuff, however it is still highly interesting, and I would recommend it to anyone who wants a something good to watch, whether you’re a fan of Triple H, or not.