Anthony Carelli is a name that might not sound too familiar to most wrestling fans but if you said Santino Marella then all would become clear, he is one of WWE’s most loveable characters and a big fan favourite.

Since making his unique debut ‘The Milan Miracle’ has gone on to become a two-time Intercontinental champion, a one time United States champion and a one time Tag Team Champion as well as a two time Miss WrestleMania!

In reality, Anthony isn’t from Italy, in fact, he is from Mississauga, Ontario, Canada and we caught up with him to talk about the opening of his new Battle Arts Academy, the infamous Jim Cornette OVW incident, the cross over between professional wrestling and MMA and much more. 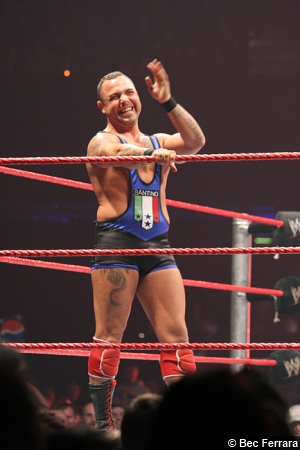 When did you first decide to open the Battle Arts Academy gym?

Myself, Steven J. Wong and George Terzis came up with the idea over a year ago when we first started talking around March 2012. We then started casually looking around for a location last summer, we found one and then we started moving forward but we actually lost the location, a new company came in and bought the portfolio of properties and they didn’t want a gym.

I was upset because we had already spoken to architects and designers but it ended up being an absolute blessing because the new location we found is so much better. It’s right in my old neighbourhood, it’s right on two busy streets, there are bus routes outside, it’s where the suburbs meet the industrial so you can get people after work, there are schools all around it, it’s an amazing location.

What can people expect to get from the Battle Arts Academy?

The Battle Arts name goes back to early on in your wrestling career?

Yeah, so I started wrestling in 2003 in Ontario, Canada and I quickly realised I’d have to pack my bags and go somewhere else to make a name for myself. It’s very interesting because if you’re from somewhere else it holds a little bit more weight than if you’re a local guy.

I went to Japan and the only connection I had at the time was a friend who trained at Battle Arts in Japan before I did. We went down there and I trained with Japanese professional wrestler, Yuki Ishikawa for a year in grappling and submissions. It was awesome, my ground game was getting really good, when I was in the national judo team my ground was always good when I was younger in my early twenties, but that was the judo ground game which was a little different to wrestling. We still did armlocks and chokes but we didn’t have leglocks so I had to adapt a little bit.

When I started doing the catch wrestling and shoot wrestling it really helped me adapt to do a jiujitsu type ground game as you see in the UFC. Then when I finally got to OVW I took this MMA background and developed into my character Boris Alexiev which actually is the character that got me noticed and ultimately hired by WWE.

I really liked Jimmy ‘Superfly’ Snuka, The British Bulldogs, Dynamite Kid and Davey Boy, I loved them both. Obviously I was a Hulk Hogan fan when I was a kid, the wrestlers from that whole generation in the eighties were good to watch.

What is your side of the story from the Jim Cornette incident in OVW?

It was just a misunderstanding, I was in the audience watching with my daughter and I was sitting in the area where the OVW students sit. I had only been there for a few weeks and didn’t know anything about wrestling, The Boogeyman was trying to get out of an exit which was behind me and I had no idea the exit was behind me because he was going out of an emergency exit.

I just told myself to keep cool because I was a Canadian in the United States and had just got there and wanted to study. I thought to myself if I retaliated in any way it won’t be good, first of all, he was a stable old guy, it wouldn’t have been a fight but that’s not the point, you just shouldn’t be laying hands on anybody.

What was it like making your WWE debut as Santino Marella in such unusual circumstances, winning the Intercontinental Title as a fan in Italy?

Out of the blue one day I got the call-up and they said I was going to debut as this Italian guy and my name would be Santino. This was an idea from top brass management, Vince (McMahon) himself actually so of course it was an honour and a privilege and I went with it.

All of a sudden they flew me out to Italy, put me in the audience and the rest is history. I was so fixated with not making a mistake that I almost didn’t enjoy the moment as it was happening. Now when I look back I can actually watch it and remember what it was like, it was pretty nerve-racking and very surreal.

What have been some of your personal highlights during your time in WWE?

Getting to be in the ring with guys like Honky Tonk Man, ‘Hacksaw’ Jim Duggan, Roddy Piper, Mick Foley and Stone Cold Steve Austin getting to interact with them you can learn so much about working and what it takes to look after the audience and stuff like that.

Some of my favourite moments are the live events around the world and some of the European tours. They’re not necessarily televised but we do have some really good matches at the live events.

You got to work with Maria and Beth Phoenix, what was it like working with them?

Maria was great, obviously she is a beautiful woman and she had a very good work ethic and wasn’t afraid to get dirty so to speak. I really loved working with Beth, she is super passionate about wrestling and she is an awesome in-ring wrestler and she is just a sweet person outside the ring. We see each other from time-to-time and we reminisce about those days because we had a lot of fun and the crowd was into it, we definitely had some good times and some good memories.

What was it like working with Vladimir Kozlov and winning the Tag Team Titles?

It was cool because Vladimir and I have a really good friendship outside of work as well, we were in OVW together, we were close to one another in Tampa, Florida and we spent countless hours driving across the country getting to shows. We would eat together, train together, our friendship made it that much more enjoyable to have the success in the ring and become Tag Team Champions. It was a fun run and he is an awesome person, very entertaining. 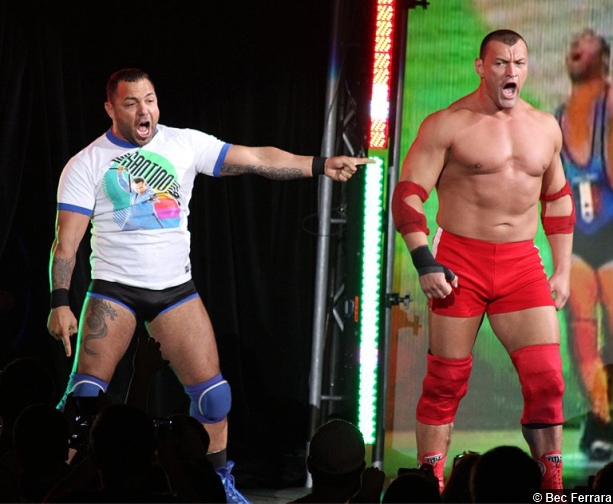 What was it like winning the United States Championship?

That was very prestigious to have that title put on me, it was kind of a validation so to speak that I was becoming popular with the fans and the Cobra was growing. They put a title on you as an exclamation point with regards to the growth and the proliferation of the character and the Cobra, so I took that as a very good sign. 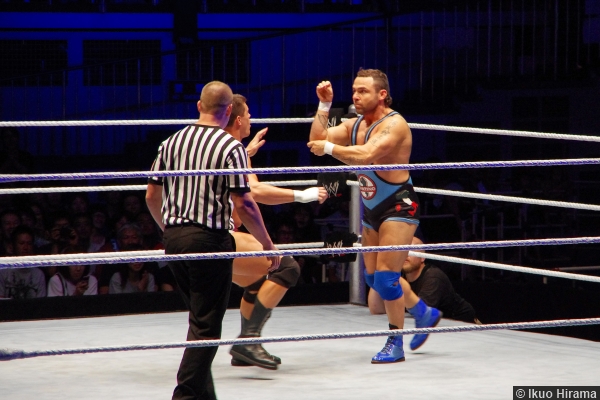 Would you ever consider portraying a more serious character, with your background in MMA?

If I was selfish yeah I would love to kick some butt and take some names after and demonstrate some of my Judo throws and my submissions and stuff like that. But the people really need to have a good laugh and they really need some entertainment. I believe it was the Rolling Stones that said, “You can’t always get what you want, but you’ll get what you need.”

I definitely love being Santino and I wouldn’t change the comedic aspect at this time.

Who would be your dream opponent?

I would have loved to have wrestled Eddie Guerrero, Kurt Angle but he is obviously with another company and Dean Malenko. Those are guys I watched, they weren’t the biggest guys, but they are so technical and so tough, I know we could have had some really fun matches. I wrestled Chavo Guerrero quite a bit and we had amazing matches, he’s awesome, so I can only imagine how good Eddie was.

If Santino was able to demonstrate his MMA prowess I would love to have matches with CM Punk, Daniel Bryan, Dolph Ziggler, and Kofi Kingston.

What have you made of the wrestlers that have gone over to MMA, such as Brock Lesnar, Bobby Lashley and Dave Batista?

I think it’s a natural transition, there is a lot of natural crossover with the training we do. We are obviously grappling enthusiasts because we do professional wrestling but a lot of us cross-train to keep in shape. I was a judo guy, there are a lot of amateur wrestling guys, jiujitsu guys, so everyone has a martial arts background. If someone hadn’t tried it before and just decided one day to do it that would be interesting but everybody did something, whether they took karate as a kid or something but a lot of the guys have always been involved in combat sport.

what have you made of MMA guys going into wrestling, with Rampage Jackson and Tito Ortiz?

That’s interesting, I don’t know if it’s for the payday but when Rampage Jackson came to Raw he told me he had often thought about becoming a pro wrestler as a kid so maybe he’s just living out his dream.

What have you made of Brocks’ more MMA style matches in WWE since his return from the UFC?

I love seeing the transition and the natural evolution of pro wrestling and it has always evolved throughout the years, and hopefully, it is a sign of things to come. I look forward to seeing further MMA involvement in the world of professional wrestling.

What have been your thoughts on the latest storyline with Triple H calling Daniel Bryan too small to be WWE Champion etc?

I’m interested to see where it’s going to go, it’s obviously making for some good television and they are making the fans want to see something happen. I’m very curious to see what the payoff is going to be.