Payback is a lot of things to a lot of people, but to the wrestlers of WWE, it’s the fourth definition above that will ring most true. On this night, receipts are cashed as championships are decided, as vendettas are acted upon, where revenge is sought on behalf of the self and others… and the night the Best in the World will be decided once and for all. Some people pay with their sweat. Some people pay with their tears. Some people even pay with their blood. No matter how they pay, they all suffer in the end because payback, as the old saying goes, is a bitch. 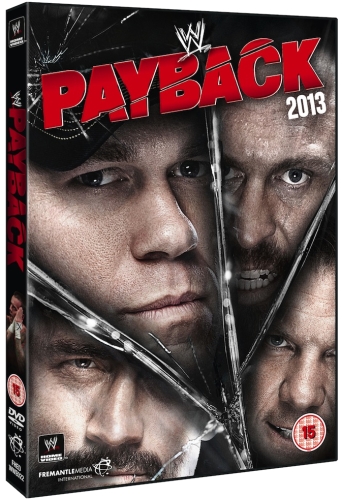 Two extras on the disc and neither is the pre-show match, but at least they are better than the standard one-minute post-match interview that really doesn’t warrant inclusion. The first is a very short (forty seconds) backstage discussion between CM Punk and Paul Heyman that actually furthers the storyline and the second is a recap of the Team Hell No/ Orton v The Shield storyline that led to the matches on the PPV. Both are good for what they are and the recap is another triumph for the WWE Production staff.

For me, to have six title matches on a seven-match card is overkill of the highest order and really drives it home that there are too many championships in WWE at present. I’ve said it before, but the World and WWE titles should be merged as should the IC and US titles. This would leave four championships for the four divisions in WWE that require them; mid-card, tag, female and main-event talent. Moving on from my own personal views on the title scene, Payback was a great event that continued the show quality from Extreme Rules. WrestleMania may have been a disappointment, but the post-Mania shows have not been (and at present this remains the case as we just come off SummerSlam). Only the Dean Ambrose v Kane match was below the level expected of the performers, which is a great return when you look at it. MVP of the night was Daniel Bryan, with kudos given to Rollins & Reigns, Punk, AJ Lee, Kaitlyn, Paul Heyman, Cena and Ryback for their efforts. Payback is well worth having in your collection. If you buy the Blu-Ray edition, the Team Hell No / Orton v The Shield match from Smackdown prior to the event is worth the money on its own. Blu-Ray owners also get -: Monday Night RAW 10th June, 2013